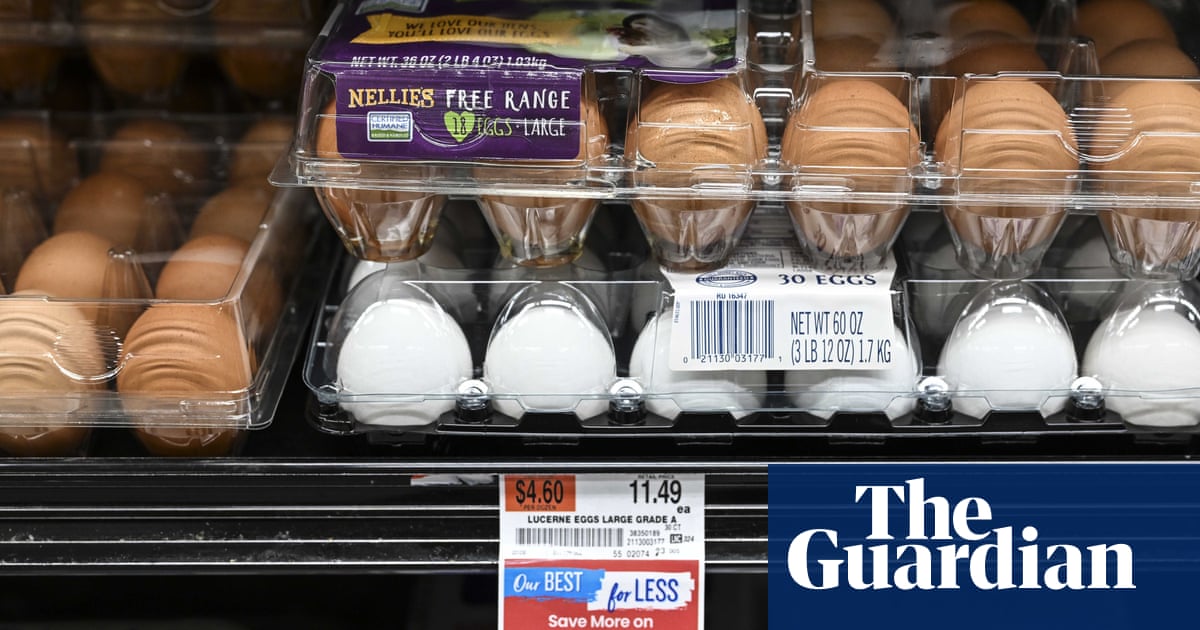 The egg carton has become the symbol of inflation. By the end of 2022, prices had shot up 60% year-over-year putting a strain on holiday budgeting for households across the country.

Some Americans got creative with their sourcing. Attempts to smuggle eggs across the US-Mexico border have surged, US Border Patrol says, with the agency reporting that the number of egg and poultry seizures rose 108% from 1 October to 31 December. Shoppers are also seeking out local farms, which can be cheaper. Egg farmers on TikTok have poked fun at this boon, calling themselves “egg dealers”, weighing their produce as if it were a kilo of drugs.

On Tuesday on the Upper East Side of Manhattan, one of the most expensive neighborhoods in America, prices remained steep. At Eli’s Market, a gourmet grocery store, a dozen organic eggs cost between $12.99 and $17.99. “Really?!” said one shopper after learning the price. “That’s nuts.” A store manager declined to comment.

A few blocks away, prices were lower, but still well above what customers are used to. Maria Tripodis, a home chef, perused cartons of one dozen eggs that ranged from $7.49 to $9.99. “These are nice eggs, but they’re a lot more expensive than usual,” she said.

There are signs that things might be turning around. The USDA Agricultural Marketing Service promises an end is in sight: as of 20 January, loose egg prices have declined by 52% from their high the week of 18 December. But in the stores that I visited, that decline was not translating into lower prices for the consumer.

The American Egg Board has blamed the price rise on an unprecedented outbreak of H1N1, a particularly virulent strain of avian flu that has a near 100% fatality rate among birds. This reduction in supply of egg-laying birds has sent prices soaring. But one farmer-advocacy group accuses major egg producers of gouging prices in a “collusive scheme” aimed at increasing profits.

The group, called Farm Action, examined publicly available financial data from the egg industry. In a letter calling on the FTC to investigate record prices, Farm Action determined that the avian flu outbreak had only had an “apparently mild impact on the industry”, generally lowering the average size of an egg-laying flock by no more than 6% compared with 2021.

“Egg prices in the grocer store have on average tripled for consumers since last year,” said Angela Huffman, Farm Action’s co-founder and vice-president. “Dominant egg corporations are blaming inflation and avian flu for price hikes, but if they were only raising prices to cover this cost, why are they raking in fivefold product margins? ”

Farm Action’s investigation began with an analysis by the USDA, which noted that the industry had not taken the proper steps to increase flock sizes and replace birds lost to avian flu.

“The only answer is that companies are working together to capitalize on these convenient excuses, using avian flu and inflation to set higher prices for the consumer,” said Huffman.

The threat of avian flu was real, she noted, but it “doesn’t justify” price gouging. “But the companies are really pushing this narrative.”

Farm Action has called on the FTC to investigate the egg producers, which could force a restitution payment that would see customers awarded money back for their purchases. Farm Action has forwarded the letter to the Department of Justice and the USDA, to encourage them to help the FTC enforce antitrust laws. “Everybody is really struggling right now, and I think it’s really cruel for these companies to take advantage of the American people in this way,” Huffman said.

Max P Bowman, vice-president and CFO of Cal-Maine, the country’s largest egg supplier, denies these claims. He issued a statement referring to the USDA’s division of animal and plant health inspection, which reported that there were 306 million layer hens for table or market type eggs as of 1 January, down 6% from a year earlier.

“In addition, like all other industries, egg production is being affected by increased input costs,” Bowman’s statement read. “In particular, the cost of feed, labor, fuel and packaging have risen considerably, which affects the cost of production, and therefore wholesale and retail prices of eggs.”

Whether or not prices are not being inflated by wholesalers, it’s grocery stores that will ultimately determine the cost.

At delis and corner stores I visited, prices were cheaper than supermarkets but still would have been unimaginable just a year ago, ranging from $6.90 to $8.99 a dozen. John Philips, who owns the longstanding Mansion Diner, said that demand for omelets and other egg dishes was still high, despite a recent price increase.

Philips said his restaurant called five companies on a daily basis for egg prices, which they purchase in thirty cases of a dozen eggs each. “We’ve seen everything from $85 to $165,” he said. “That’s a huge swing. At some points, we’re able to get a cheaper egg from an organic farm in upstate New York than we were from a wholesale market. It shouldn’t have to be that way, but I’ll take it.”

He and his staff frequently switch suppliers. “It’s complicated,” he said. “I sell cheeseburgers for a living, and I have to think like an economist now when I buy my fucking eggs.”