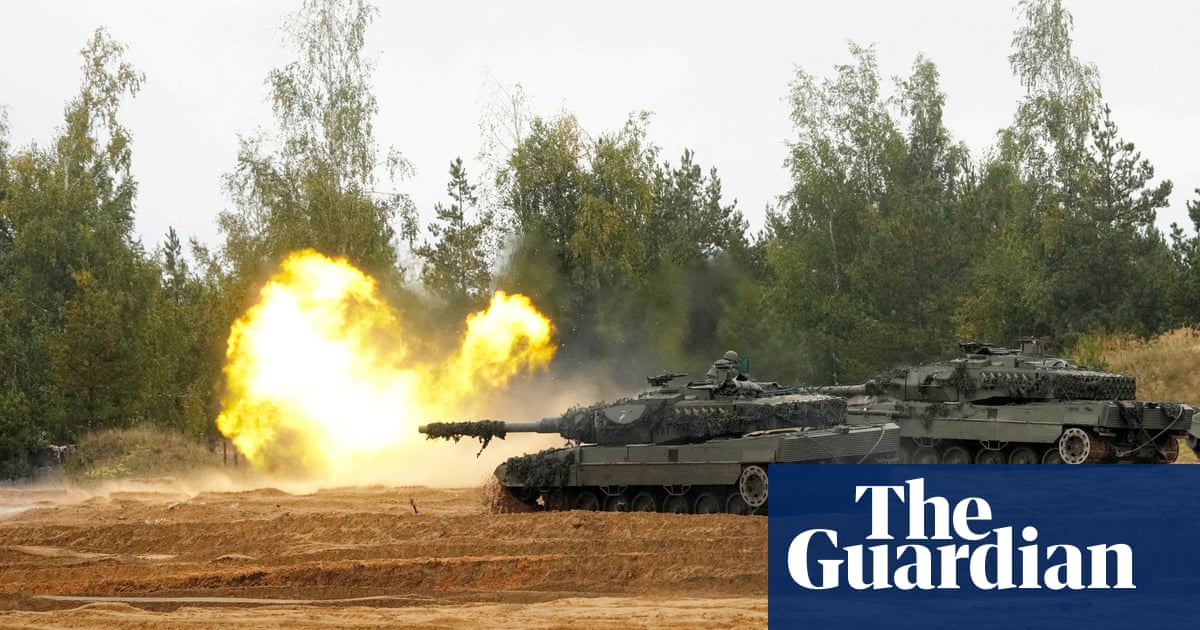 It has felt like an interminable wait, but in fact Germany’s hesitation over Leopard 2 tanks lasted only a few days. Berlin has got what it wanted – more cover from the US – although it had to pretend at one point it didn’t want it.

With Washington agreeing, in principle, to send some of its gas-guzzling Abrams tanks at some point, chancellor Olaf Scholz has scored a diplomatic victory. Berlin is now not alone in sending homemade tanks to Ukraine and can portray itself as not simply being bullied into agreement.

Politically, western unity is critical. The west may not be fighting directly in Ukraine, but the war is not one it can afford to lose. If Russia is able to hang on to the fifth of Ukraine it has captured throughout 2023, the Kremlin, now in charge of the world’s largest rogue state, will only grow in confidence.

Instead, the western alliance has shown it can stick together as it upgrades its weapons supply to Ukraine, at the price to the US of 30 of its arsenal of Abrams tanks – although their fuel demands, “three gallons to the mile” according to the Pentagon, mean simple logistics supply will be a challenge for Kyiv’s forces.

However, even if the Abrams take months to arrive, it is beginning to look like Ukraine will be promised a meaningful number of tanks in relatively short order. Germany has promised a company of 14 of its Leopard 2s and will allow Poland to send 14 more. Britain wants to send 14 of its Challenger 2s.

Norway is ready to send eight Leopards and the Netherlands may offer 18, while Finland, Denmark and Spain all appear ready to join in – and France may offer some Leclerc tanks too. That could eventually surpass the 100 that the IISS thinktank has suggested would be needed to have some impact on the battlefield, although well below the 300 Ukraine has said it needs to win the war.

Germany has long been concerned about how Russia might respond, not least because of the long memory of the second world war. The propaganda value for the Kremlin is obvious – it wants to paint Russia as locked in a war with Nato to rally support among its own population – but that is not threatening for the west.

Meanwhile, Moscow is so heavily embroiled in Ukraine that the idea it could retaliate militarily against Nato members (and so risk a Nato response) is hard to believe, beyond perhaps carrying out some cyber-attacks.

Tanks are not war-winning weapons by themselves, however, although heavy tracked armour is critical to mounting any kind of offensive across open terrain against entrenched Russian positions, not least because they can continue to advance once they meet the inevitable resistance.

They also need support from infantry and other armoured vehicles, while commanders on the ground need training in the tactics of such combined arms. Earlier this month, the US, Germany and Sweden committed about 200 fighting vehicles, while the US has expanded its training in Grafenwöhr, Germany.

What is less clear is whether Ukraine can mount a war-winning offensive at a time when Russia is increasingly expected to announce a second mobilisation. That would come on top of the 300,000 recruits the Kremlin forcibly sent to the army last autumn, of whom up to half have not yet been committed to battle. Numbers matter in warfare; an attacker would normally seek a three-to-one ratio to be confident of offensive success.

Meanwhile, there are rumours that Ukrainian tanks are running short of the 125mm ammunition that is standard for its T-64 and T-72 tanks, as are the Russians. A reason for switching to western standard Leopards with their 120mm guns is to access Nato stocks, and Ukraine’s desire for tanks may be more defensive that it first appears.

Political promises are also only the first part of the story. There are an impressive-sounding 2,329 Leopard 2s held by 13 Nato allies, enough in theory to supply Ukraine in strength and retain enough for self-defence. But 369 are in storage and the state of repair of those held by militaries is uncertain.

In August, Spain, sitting on 327 Leopards, found them in a “deplorable state” – unfit to send 10 to Ukraine without months of remedial work. Madrid appears to have made progress since, but the question remains regarding how many good-quality Leopard 2s are available now, plus spare parts.

Yohann Michel, a research analyst from IISS, estimates “it will take two months” to get Ukrainian solders trained on Leopard 2s and the tanks themselves into the country, all of which points to Kyiv being ready to attack or defend as necessary when the heavy “Rasputitsa” muds ease as the spring warms up.

That promises to be a critical period for Ukraine and one that already raises further questions for its backers. Will the promised wave of tanks be enough to help Ukraine kick the Russians out? What if they do little more than help Ukraine hold its position if Russian troop numbers swell?

Supplying several dozen of tanks is a significant step forward, but it may well not be militarily decisive. Instead, the west may have to consider another unity-testing decision about supplying Ukraine within weeks.

How can we allow this to continue (“Land clearing threatens…

Independent MP Dai Le said the government must come up…