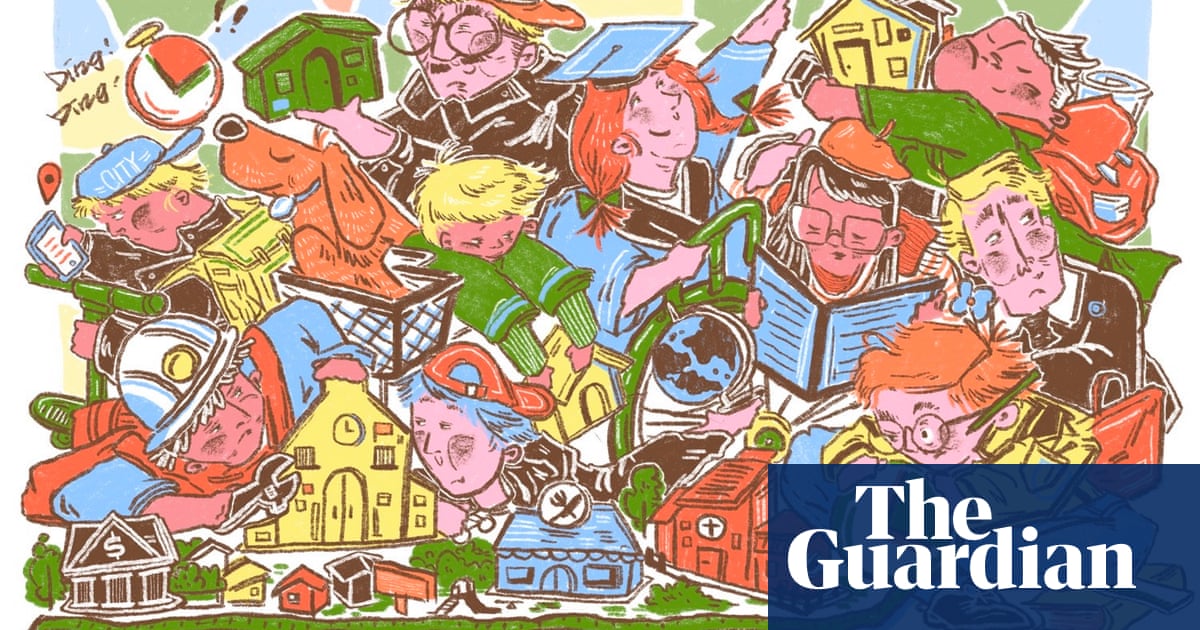 At first glance, O’Fallon, Illinois, has little in common with Paris, France. Paris has its world-class museums and cream-colored Haussmann-style apartment buildings. O’Fallon, an outer-ring suburb of St Louis with a population of 32,000, has a collection of squat brick buildings settled around a little-used freight rail track in its city center, and a proliferation of mid-century ranch homes on the blocks beyond.

On the other hand, there are macarons for sale at O’Fallon’s Sweet Katie Bee’s organic bakery cafe. And last year, when O’Fallon adopted a 180-page master plan to guide its development for the next two decades, it chose the same “organizing concept” that Paris’s mayor, Anne Hidalgo, made the backbone of her 2020 re-election campaign: the 15-minute city.

The idea is relatively simple. Residents should have everything they need within a 15-minute walk or bike ride from home. “Transforming O’Fallon into a 15-minute city will help make our lives more convenient, less stressful and more sustainable,” the plan suggests. Easy enough to imagine in Paris, where there’s fresh bread on every corner. But in a sprawling section of the American midwest?

O’Fallon’s commitment to self-sufficient districts shows what a sensation the 15-minute city has become since Paris first embraced the idea three years ago. In September, C40 Cities, the network of leaders from the world’s largest cities, partnered with UN-Habitat to deliver proof of concept through five pilot projects. The journalist Fareed Zakaria endorsed the idea as a principle for the post-pandemic world. Deloitte identified it as a key trend in its 2021 study of the urban future.

Some dream of escaping gridlock with the help of flying cars. But why not just bring the things you need a little bit closer?

Some dream of escaping gridlock and congestion with the help of tunnels or flying cars. The 15-minute city planner counters: why not just bring the things you need a little bit closer? With white-collar workers cloistered at home during the worst of the pandemic – and many liberated from the commute since – a well-rounded and amply stocked neighborhood has become a widely shared goal.

The term itself was coined by Carlos Moreno, a scientist at the Sorbonne who first promoted la ville du quart d’heure in 2016. He dreamed up a city where “in less than 15 minutes, a resident can access his essential life needs”. (“Chrono-urbanism” emerged a decade ago and prompted experiments in metropolises such as Portland, Oregon, and Melbourne, Australia, which set their watches on 20 minutes.) Substantively, Moreno’s conditions were not so different from existing tenets of progressive city planning, such as walkability, smart growth, mixed-use zoning, “missing middle” housing and ending food deserts. But the 15-minute city felt like less of an obligation than an opportunity.

Moreno’s phrase gained traction when Hidalgo made it part of her city hall run in the first half of 2020. The school, as she saw it, would become the “capital of the neighborhood”, open to adults for sports and cultural activities on nights and weekends. Streets would be greener, cleaner and calmer. More than a hundred blocks across Paris would be closed to traffic and turned into de facto plazas. Cultural amenities, medical services and governmental functions would be redistributed at the neighborhood level. Forget megaprojects. The new priority was keeping it local.

At first, this conveniently circumscribed version of urban life was a vision. Then it became all too real: when France locked down during the Covid-19 pandemic in March, mere months after Hidalgo first raised the notion of a Paris made of tiny towns, residents were forbidden from venturing more than a kilometer from their homes if not for “essential trips” – a 15-minute city by decree. Around the world, with offices and schools shuttered, many metropolitan residents became newly involved – and invested – in their neighborhoods. In New York, several local commercial drags clocked more foot traffic and retail spending than they had before the pandemic.

While the idea of a small town existing within a city is not new – US urbanist Clarence Perry advanced the concept of the “neighborhood unit” in the 1920s; Jane Jacobs penned an ode to the little society of her Manhattan block – for most of the 20th century, US development patterns moved sharply away from idealizing the local. Politicians forbade the density necessary to support local amenities on the grounds that it was a driver of squalor and crime. Residential neighborhoods were plotted far from commercial centers, and many banned even small merchants like coffee shops or convenience stores. In 2017, the average shopping trip in the US was more than 7 miles.

In other words, the 15-minute city is a radical rejection of just about everything the US has built in our lifetime. Timur Abbiasov, a researcher at the MIT Senseable City Lab, has studied the relationship between local errands and the geography of amenities. Using cellphone data, his team compared 15-minute trips with the presence of nearby stuff to do. According to the findings, the more commerce, parks and services in a neighborhood, the more people travelled locally, whether in the country’s most walkable cities or its least. “In the US context, the 15-minute city is still, in my opinion, about the lack of sufficient density and access to shops and services,” he said. To give people local access, we need more homes near schools, parks and shops – and more commerce in residential neighborhoods.

For most Americans, home looks more or less like O’Fallon, Illinois. There’s parks and supermarkets, hospitals and pizza joints – a bit of everything, really – but mostly there are large swaths of land reserved exclusively for single-family homes. When planners in O’Fallon started interviewing citizens for the new master plan, however, what they heard was: we want opportunities to walk and bike, as well as better access to shops, restaurants and cultural amenities.

If I’m working from home more, wouldn’t it be great if there were something close and convenient I could go to without having to drive?

“There’s been a lot of discussion about whether traditional suburban zoning is appropriate anymore,” said Walter Denton, O’Fallon’s chief administrator. “What people like about [neighboring] St Louis is the neighborhood character, different uses mixed together, how quaint it is. Wouldn’t it be great if we could do something like that here? And if I’m working from home more, wouldn’t it be great if there were something close and convenient I could go to without having to drive?”

The master plan he and his team came up with outlines several ideas to help satisfy the residents’ desires, including increased housing density, new housing types to accommodate seniors and young people, mixed-use buildings to integrate commercial entities into residential neighborhoods, and a seamless network for bicycles, pedestrians and other non-drivers.

Whether those changes can happen in O’Fallon before the NIMBY (not in my back yard!) backlash bell tolls is unclear. Many people like mixed-use housing and bike lanes in the abstract, but not when they show up in their back yard. The conservative Canadian author Jordan Peterson recently expressed skepticism about a proposal for a 15-minute city plan in Oxford, England, writing on Twitter: “The idea that neighborhoods should be walkable is lovely. The idea that idiot tyrannical bureaucrats can decide by fiat where you’re ‘allowed’ to drive is perhaps the worst imaginable perversion of that idea – and, make no mistake, it’s part of a well-documented plan.”

Many observers on the left, too, find the concept lacking. After all, not everyone spent the pandemic working on a laptop from their suburban guest room, and less than 4% of Americans walk or bike to work. One man’s 15-minute city may only be possible because another man travels for miles to work in a local grocery or deliver Amazon packages to his porch. It’s a snag that even Moreno doesn’t have an easy answer for. “Of course, it’s impossible for me to assure a mayor that residents will find work a short distance away,” he said.

It’s hard to talk about the 15-minute city, because many Black and brown neighborhoods in this country don’t have those [necessary] amenities

“It’s hard to talk about the 15-minute city and having shops, groceries, healthcare, because many Black and brown neighborhoods in this country don’t have those amenities,” says Andre Brumfield, the head of the cities and urban design practice at the global architecture firm Gensler. For Brumfield, who lives in Chicago, creating 15-minute access in high-poverty neighborhoods is an important objective – but it’s less about zoning reform and more about drawing public amenities and private entrepreneurs to populous areas that lack services.

Finally, there’s the question of whether the 15-minute city is fundamentally at odds with urban interests. Should residents of prosperous enclaves stay in place, their cash will stay in the suburbs too, draining municipal coffers and threatening a spiral of reduced public services and population decline. Then again, that’s not the 15-minute city’s fault. With commuters already more or less gone from downtowns, those once-booming hubs may need to diversify most of all. The 15-minute city may fulfill the desire for convenience in the suburbs. But for every half-empty office district, it’s a lifeline.