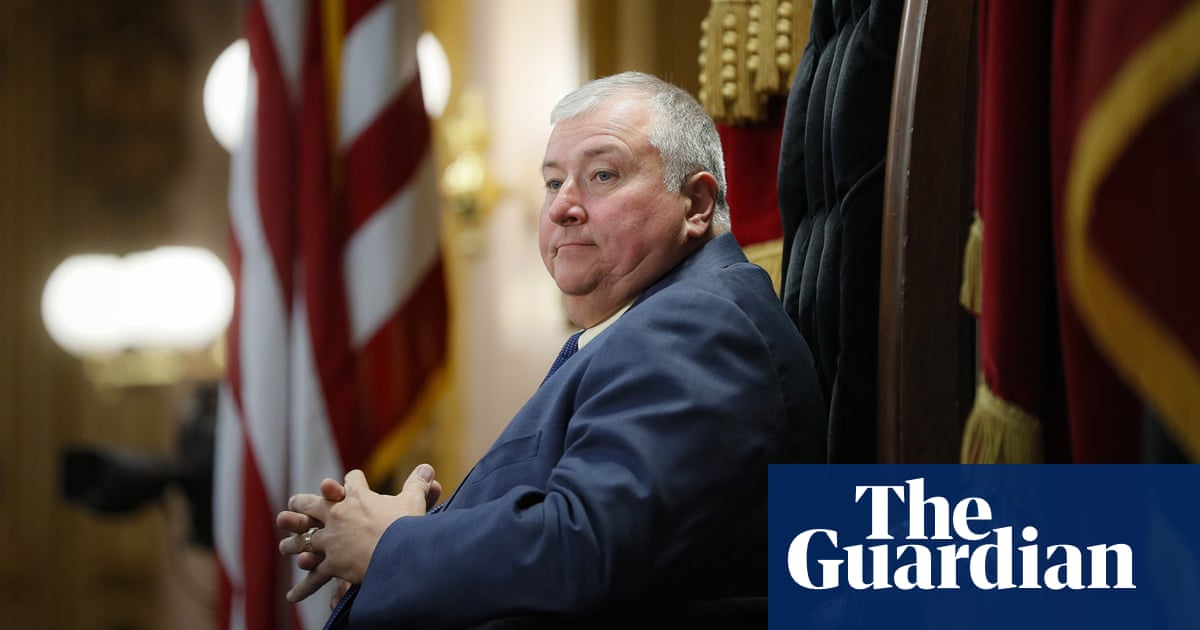 Federal prosecutors on the first day of a historic racketeering trial in Ohio alleged that top Republicans in the state accepted bribes from the power company FirstEnergy.

The trial, which is expected to last six weeks, is the latest utility scandal following cases in the last 10 years in Arizona, Louisiana, Alabama and Florida which experts say has led to higher bills for consumers, less green energy, and more CO2 emissions.

One of the defendants, the former Ohio house speaker Larry Householder, told reporters Monday morning as he waited for opening statements in the US district court in Cincinnati that he has done nothing wrong and expects “redemption”.

Householder is charged with one count of racketeering, and if convicted, faces up to 20 years in prison.

Prosecutors allege that Householder and the four men indicted alongside him received over $60m in bribes from the Akron, Ohio-based FirstEnergy corporation and its subsidiaries.

Prosecutors argue that in exchange, Householder and his co-conspirators passed HB-6, a bill that would have delivered $1.4bn in customer funded bailouts to two ailing nuclear plants controlled by the utility. Nuclear power has struggled to compete with comparatively cheap gas plants in recent years.

“Larry Householder sold the statehouse,” assistant US attorney Emily Glatfelter told jurors in the government’s opening statement. “He ripped off the people he was elected to serve and made backroom deals to exchange his power for money.”

At the heart of the case are the over $60m from FirstEnergy and its subsidiaries that Householder and his four co-conspirators received via several “dark money” tax exempt entities, the most important of which was Generation Now.

Such organizations, known as 501(c)4’s, are ostensibly meant to promote “social welfare”. Federal tax and case law allows them to withhold the names of their donors. “A 501(c)4 is a perfect entity to receive a secret bribe,” prosecutor Glatfelter told the court.

In exchange for the millions to Householder, FirstEnergy got $1.4bn of subsidies for two of its ailing nuclear plants, prosecutors allege. The subsidies came in the form of HB-6, a bill championed by Householder as one of the signature pieces of legislation of his speakership. The law slapped a surcharge onto the electric bills of everyday Ohioans and went toward making the two nuclear plants profitable.

“It doesn’t matter if it was good or bad legislation. It was corrupt legislation,” Glatfelter told the court.

Householder and his co-conspirators allegedly used the FirstEnergy cash to make sure that Republicans friendly to the company’s agenda – and to Householder’s leadership claim – were elected. In one 2018 race, a charging document alleges, Householder’s conspirators used the power company cash to run deceptive ads implying a rival candidate had driven while under the influence. The man hadn’t, but the last minute ad-blitz cost him the seat by 138 votes.

Householder, the government contends, also used the cash for more than just political power. Court records show some $215,000 went to pay the legal bills of a lawsuit he settled. Another $100,000 went toward the cost of a home in Naples, Florida. His defense attorneys say this was a loan that he intended to pay back.

In July 2021, FirstEnergy pleaded guilty to its role in the scheme, agreeing to pay a $230m penalty.

Asked about its involvement in the case, the company said it had adopted new political giving standards “grounded in integrity and transparency”.

Another company that paid $700,000 into Generation Now, American Electric Power, was allowed to charge Ohio electricity customers $1.50 a month to subsidize ailing coal plants it owned. It has not been charged. A spokesman for the company said it “actively participate(s) in the political process in an ethical and lawful manner”.

After the bill passed, Householder and his four co-conspirators are accused of using further millions of FirstEnergy cash to defeat a ballot referendum that would have disarmed major provisions of the bill.

“The millions paid into the entity were akin to bags of cash,” a federal criminal affidavit reads. “They were not regulated, not reported, not subject to public scrutiny.”

The Ohio FirstEnergy scandal is part of a larger trend.

Over the past decade, the accelerating energy transition away from fossil fuels and a move to competitive energy markets have challenged monopoly utilities.

In 2014, Arizona Public Service pumped millions of dollars into dark money groups meant to elect regulators more friendly to its agenda and who were opposed to rooftop solar. The spending was suspicious enough to prompt an FBI investigation in 2016. Recently, state regulators there have forced the company to disclose more information about its political spending. The inquiry revealed the organization had spent more than $22m in donations to tax exempt organizations between 2019 and 2021.