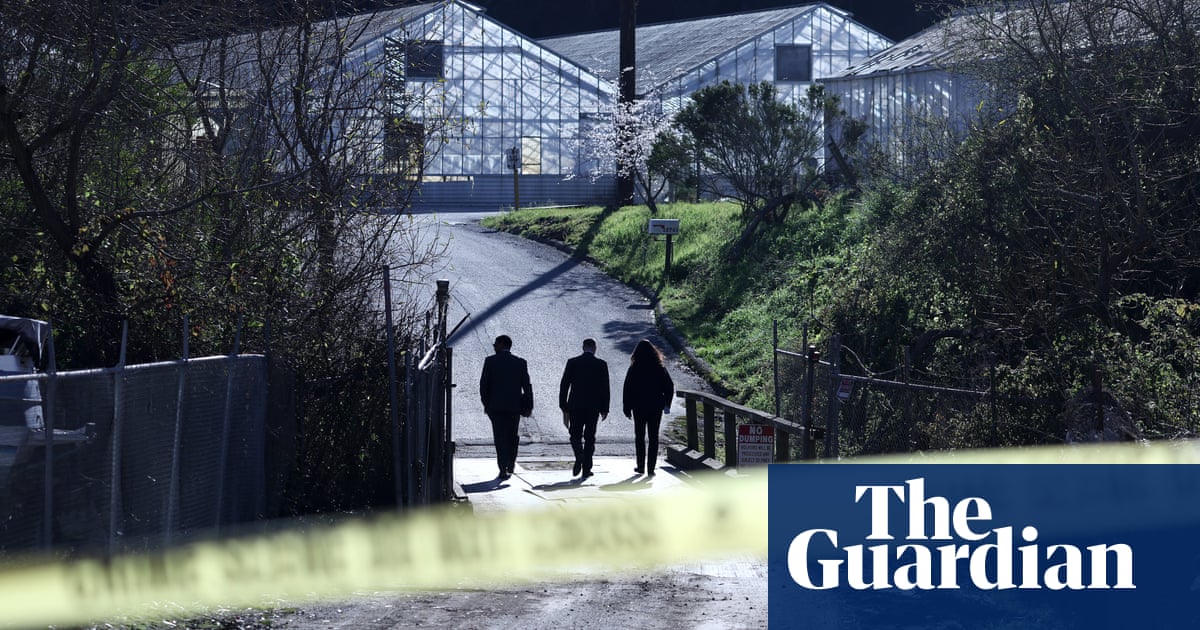 An agricultural worker in northern California allegedly killed seven people as part of a “workplace violence incident”, the state’s third deadly mass shooting in little more than a week.

Police are questioning 67-year-old Chunli Zhao, who they say shot dead four and wounded one more on Monday afternoon at a mushroom farm where he worked in Half Moon Bay, a coastal community 30 miles south of San Francisco.

He then moved on to a trucking firm about 5 miles away and killed three more, officials said. He was taken into custody without incident after being spotted sitting in a car by a deputy in the parking lot of a sheriff’s substation. He is being held without bail and is expected to be arraigned on Wednesday.

California has been left reeling by back to back gun violence in recent days. The new year has brought multiple mass killings – that is, with at least four fatalities excluding any perpetrator – in the US, three of which occurred in California. Within 48 hours, 18 people died in mass shootings in the state, including 11 people killed at a lunar new year event at a Monterey Park dance hall on Saturday.

Last week a “horrific massacre” in the small central valley town of Goshen left six people dead, including a teenage mother and her 10-month-old baby.

The violence in Half Moon Bay has devastated the coastal city of 12,000 people, an agriculture hub known for producing pumpkins and flowers, particularly the area’s farmworkers, many of whom are immigrants. “Many of these workers came to this country to work and provide for their families. Instead many of them yesterday lost family members,” said Christina Corpus, San Mateo’s first Latina sheriff.

Local agencies are providing income replacement to workers affected by the shooting and offered hotel rooms to impacted families.

“Right now we’re reaching out to the community with mental health services and trying to help the families as best we can, and trying to make sense of what is an absolutely senseless act,” Dave Pine, chair of the San Mateo county board of supervisors, told NPR’s Morning Edition on Tuesday.

“We mourn the loss of these innocent people, and look forward to a day when we don’t have to be living in fear of gun violence in our community, and in the country.”

Detectives are piecing together a motive for the Half Moon Bay shooting, which the sheriff said on Tuesday was not a random attack as Zhao was an employee at Mountain Mushroom Farm.

“All of the evidence we have points to this being the instance of workplace violence,” Corpus said. “The only known connection between the victims and the suspect is that they may have been coworkers.”

“He had an opportunity, I really do believe, to hurt other people, but he has targeted individuals that he went after and pursued,” she told CNN.

Corpus told a Monday night press conference that the suspect was a mushroom farm worker who acted alone, and there was no further threat to the community.

The shooter opened fire on workers at the farm with no regard for who was nearby, Corpus said.

“It was in the afternoon when kids were out of school. For kids to witness this, it’s unspeakable,” she said.

“People saw him there today and it seemed like a normal day for everyone, and then this tragedy happened.”

Video of the suspect’s arrest showed three officers approaching a parked car in the sheriff’s substation parking lot at a strip mall with their guns drawn. The man was pulled to the ground after emerging from the vehicle, placed in handcuffs and led away.

FBI agents are assisting the investigation, the agency said Tuesday, offering forensic and technical support and victim services and trying to determine how the gunman acquired the weapon. Corpus said he used a semi-automatic gun that was recovered from his vehicle, and told CNN on Tuesday that the weapon was legally owned and registered to the suspect.

Joe Biden expressed his sympathy in a statement on Tuesday morning from the White House, calling again on Congress to reinstate a nationwide ban on assault weapons.

“For the second time in recent days, California communities are mourning the loss of loved ones in a senseless act of gun violence,” the president said.

“Even as we await further details on these shootings, we know the scourge of gun violence across America requires stronger action. I once again urge both chambers of Congress to act quickly and deliver this assault weapons ban to my desk, and take action to keep American communities, schools, workplaces and homes safe.”

California’s Democratic governor, Gavin Newsom, tweeted that he was “at the hospital meeting with victims of a mass shooting when I get pulled away to be briefed about another shooting. This time in Half Moon Bay. Tragedy upon tragedy.”

At a press conference on Tuesday afternoon, the governor and other elected officials called for action to address the constant gun violence that plagues America.

“The least amongst us are the ones that are the headlines today across the country, around the world – that is the farmworkers. They were killed with purpose, with intent, execution style,” said congresswoman Anna Eshoo. “We have unfinished business in our country to address gun violence … until it is our finished business, there will be pain in many communities.”

The governor pledged the state would commit to looking at what it could do to reduce gun violence, but said California cannot do it alone and more action is needed from officials in Congress.

“What the hell is going on?” Newsom said. “It’s said all the time ‘only in America’. Number one in gun ownership, number one in gun deaths. It’s not even complicated … It doesn’t have to be this way, wasn’t always this way. We’ve allowed this to happen.”

Pine, the San Mateo supervisor, spoke emotionally at the Monday press briefing as he blamed the tragedies on the surfeit of guns in the US, 120 for every 100 residents. In a survey released last year, one-third of Americans admitted to legally owning a gun, and 6 million Americans said they carried a loaded handgun daily.

“We simply have too many guns in this nation. We have more guns than people,” he told NPR.

“Research has shown that we’re unique in the world in gun violence and it’s really attributable to the total number of guns that are available. When people are in crisis, they often have access to a gun. We have to make sure guns are better regulated.”

Joaquin Jimenez, the vice-mayor of Half Moon Bay, said the shooting of agricultural workers has brought attention to the challenges they face and urged the community to unite as they have in recent disasters.

“Now it is time for all of us to come together and bring the support,” he said. “We never thought it was gonna happen in our beautiful community, but it happened.”

The Associated Press contributed to this report