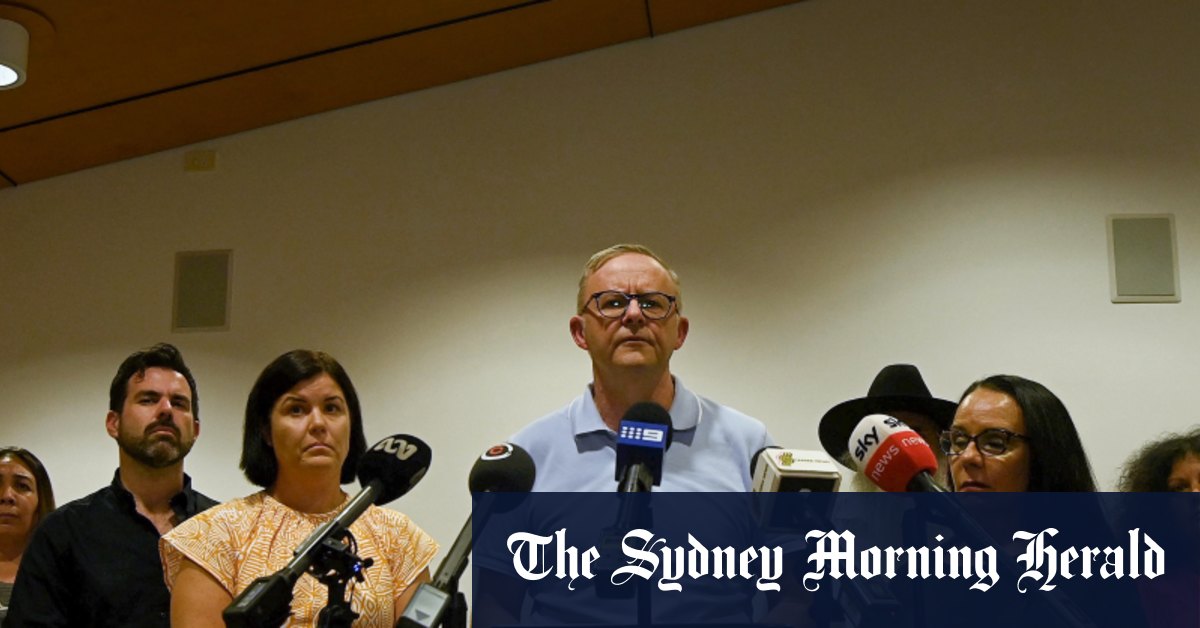 Alcohol sales will be subject to immediate curbs across the Northern Territory in a step towards more sweeping bans within a week, after Prime Minister Anthony Albanese flew to Alice Springs to respond to a surge in violence ravaging Indigenous communities.

The prime minister shelved the prospect of federal police being sent in as he outlined the urgent changes alongside Northern Territory Chief Minister Natasha Fyles late on Tuesday, just hours after she had played down the prospect of imposing new alcohol bans.

“These are complex problems, and they require a full solution, which won’t be immediate, which require different levels of government to work together to that end,” Albanese said during a press conference following an emergency meeting with federal, territory and local leaders.

On top of an existing restriction on Sunday alcohol sales, bottle shops will be banned from selling take-away alcohol on Mondays and Tuesdays, while trading hours for takeaways would be reduced on the remaining days, and transactions would be limited to one per person, per day.

It is not yet clear how these restrictions will be policed.

Fyles said the government could enforce the changes immediately. “I do ask the community to understand that we do not take these decisions lightly, but these are measures to reduce the amount of alcohol in our community,” she said.

Albanese said the government would also consider the reintroduction of alcohol bans in the Northern Territory under an “opt-out situation” rather than the current rules, which allow communities to opt in to restrictions, following the lifting of federal legislation in July.

“I support … immediate measures to place restrictions on the availability of alcohol,” Albanese said.

The prime minister has also appointed a Central Australian Regional Controller, Dorelle Anderson, who will report back to the federal and territory governments on an alcohol ban on Wednesday, February 1.

Burney said the measures “that have been announced today are important, and the fact that we have an ongoing process for dealing with … incredibly complex issues in central Australia should be commended”.

She said the issues of youth on the street and alcohol fuelled violence were real. “Let’s not pretend,” she said.

The crisis meeting followed mounting calls from community leaders and the federal opposition for the prime minister to visit the town to confront the crisis.

The Howard government enacted widespread alcohol bans as part of its Northern Territory intervention in 2007. These rules were replaced by Labor’s 2012 Stronger Futures laws, which maintained bans and increased penalties.

Despite protests from some Indigenous community groups and leaders, the Stronger Futures law was allowed to expire in July. Alcohol-driven crime has risen dramatically in the Territory as liquor became legal in some areas for the first time in 15 years.

Northern Territory police commissioner Jamie Chalker said the lifting of decade-old alcohol bans last July directly contributed to the surge in violent crime in Alice Springs. He also warned that lifting other restrictions – such as income management – could spur a further spike in alcohol-related crime.

While the Chief Minister earlier on Tuesday ruled out a return to what she labelled race-based policies that discriminated against Aboriginal communities, her Attorney-General Chansey Paech also backed the return of the bans.

“It’s okay that we got it wrong,” he told Sky News.

Opposition Leader Peter Dutton told Nine on Tuesday he was shocked when he visited the town in October.

“I said to the PM we would support whatever measure the government would take, whether it needed legislation, additional resources, additional money going into the Northern Territory,” he said.

However, Fyles accused Dutton of playing politics in recent weeks “without even visiting the Northern Territory” and letting the Stronger Futures legislation lapse while he was in cabinet under the previous Coalition government.

“But we have let the data settle. It’s clear after six months that we need to make further changes, and you’ve seen that with the measures announced today,” she said.

Prominent academic and campaigner Tom Calma rejected the notion Canberra’s focus should shift away from the Voice toward the crime problem in the Northern Territory, saying the proposed advisory body would foster better policy and better outcomes for crises like this.

“This, if nothing else, reinforces why we do need a Voice,” he told this masthead.

“A national Voice will deal with Commonwealth legislation and programs. But also a jurisdictional Voice, which will happen at the state and territory level, and I think that is an important one that we need to focus on.”