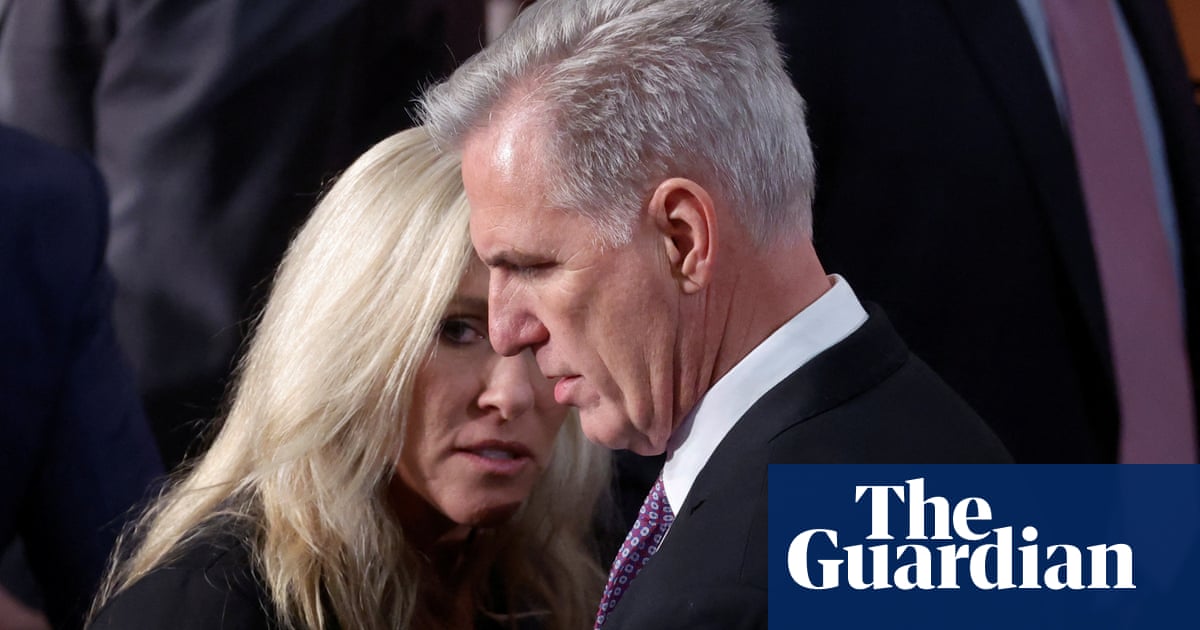 Kevin McCarthy reportedly said he would “never leave” Marjorie Taylor Greene, the far-right, conspiracy theorist Republican congresswoman from Georgia, after she backed him through a rightwing rebellion and 15 rounds of voting for the position of US House speaker.

“I will never leave that woman,” McCarthy told a friend, according to the New York Times. “I will always take care of her.”

Elected to Congress in 2020, Greene quickly became a figurehead for the pro-Trump far right, particularly after Democrats then in control of the House ejected her from committees, citing her racist statements and encouragement of violence against political opponents. Eleven Republicans supported the move.

Recently, Greene said that if she had been in charge of Trump supporters who attacked Congress on 6 January 2021 – an attempt to overturn Joe Biden’s election win now linked to nine deaths and more than 900 charges – “we would have won”.

In comments she later claimed were made in jest, Greene also said the protesters “would’ve been armed”.

In a detailed examination of the emerging bond between McCarthy and Greene, the Times said the speaker’s remarks about the congresswoman’s support were made to a friend who wished to stay anonymous.

But both politicians spoke to the paper of record.

“If you’re going to be in a fight, you want Marjorie in your foxhole,” McCarthy said. “When she picks a fight, she’s going to fight until the fight’s over. She reminds me of my friends from high school, that we’re going to stick together all the way through.”

Greene said that by sticking to his agenda as speaker, McCarthy would “easily vindicate me and prove I moved the conference to the right during my first two years when I served in the minority with no committees”.

Greene told the paper McCarthy’s defense of her when Democrats removed her from her committee assignments in February 2021 “had a big impact on me”.

Almost two years later, she and McCarthy were shown in regular and close contact during the 15-vote speakership marathon, a process covered by C-Span cameras and watched by a national audience.

Last week, McCarthy assigned Greene to the homeland security and oversight committees, both set to be key engines of Republican attacks on the Biden administration over the next two years.

Greene told the Times: “People need to understand that it isn’t just me that deserves credit. It is the will and the voice of our base that was heard, and Kevin listened to them. I was just a vehicle much of the time.”