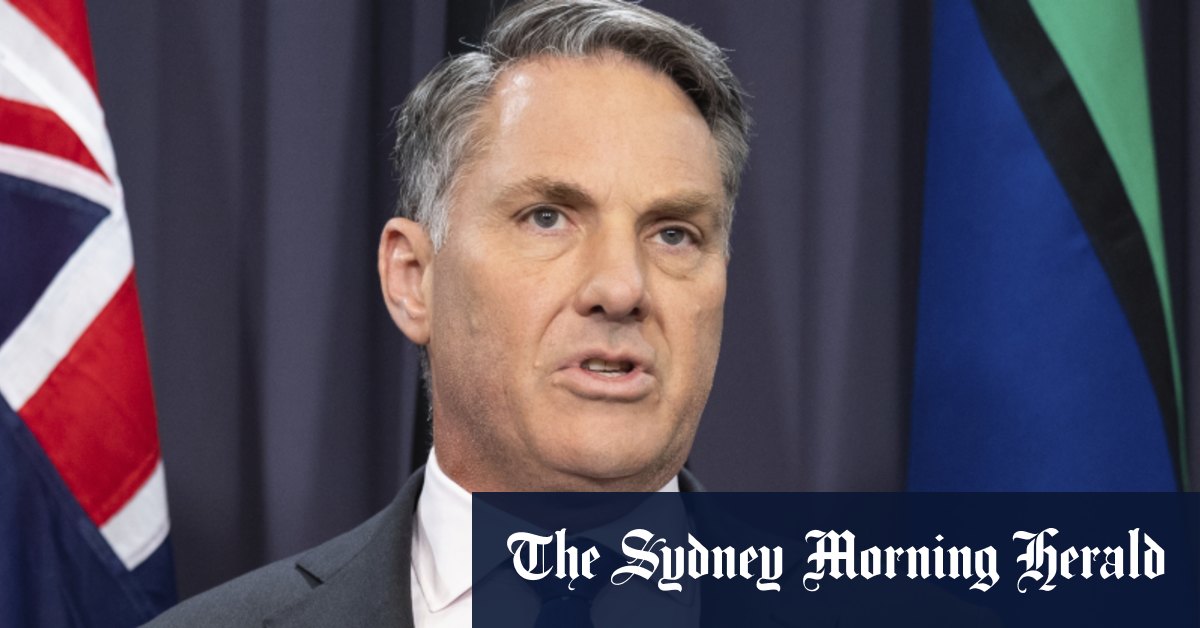 Defence Minister Richard Marles says the government has almost completed its plan to acquire a fleet of nuclear-powered submarines under the AUKUS pact and won’t shy away from taking tough decisions to overhaul the Defence Force for today’s military threats.

Despite recent speculation about the United States’ ability to provide nuclear-powered submarines to Australia, Marles said Australians should feel assured the nation would not be left with a capability gap following the retirement of the ageing Collins-class fleet.

Marles will receive both the recommendations of the nuclear-powered submarine taskforce and the final version of a sweeping strategic review of the nation’s defence forces within weeks, laying the foundation for some of Australia’s most significant national security decisions in decades.

“I think this is a huge moment in Australian defence history,” Marles told this masthead.

“What I can say is that the body of work for both exercises is on track and therefore near completion.”

It was revealed earlier this month that two senior US senators had written to US President Joe Biden to warn the AUKUS security pact struck in 2021 between Australia, the United Kingdom and the US risked pushing America’s industrial base to breaking point.

A bipartisan group of US politicians insisted in a counter-letter that American shipyards were up to the task of providing Australia with a stopgap supply of nuclear-powered submarines.

Marles said he felt personal pressure to get the big calls correct given the enormous costs involved in turning AUKUS into reality and the fact previous plans to modernise Australia’s submarine fleet failed to materialise.

“There is absolutely the sense of a weight of responsibility that the questions we are deciding, the decisions we’re taking will have a very big impact on the nature of the country for a long time to come,” he said.

“I feel really confident that we’ll be able to make decisions in a way which is in the best interest of the country.”

Marles said he was preparing to shortly announce the submarine model the government would adopt as well as an interim solution to avoid a capability gap before the arrival of locally made boats.

The government would also provide a cost estimate of the nuclear-powered submarine program and detail about how Australia would comply with its nuclear non-proliferation obligations.

“I’m confident that we’ll have answers to all those questions,” he said. “And I feel good about that.”

With experts predicting acquiring nuclear-powered submarines will cost at least $100 billion, and possibly significantly more, Marles acknowledged the project was a massive endeavour.

“We know, this is a very significant procurement,” he said. “It’s a very big step the country is taking. We get a huge capability which is transformative in terms of our strategic posture, in terms of being able to be taken seriously.”

Marles suggested the final submarine model would involve significant input from both the UK and US, dismissing suggestions the UK could be a bit player in the AUKUS pact.

“What has really evolved in the conversations around AUKUS is that it is a genuine three-country collaboration,” he said.

“That’s what’s now going to happen in terms of technology, which was always at the heart of this, but also on the industrial side.”

British Defence Secretary Ben Wallace has hinted that the AUKUS nations might consider a future submarine model common to all navies.

“It might have a bit of all three of us on it, so it may look like a submarine that none of us have on our stock,” Mr Wallace said in September.

Marles and Foreign Minister Penny Wong will travel to the UK and France next week to meet with their British and French counterparts.

Marles would not specify what proportion of the submarines would be built in Australia. But with US and UK production lines operating at full capacity, he said the Osborne Naval Shipyard in Adelaide would play a major role in the project.

“We must develop an industrial capability in Australia. That’s the only way this can work, and that’s what will be expected of us by both the UK and the US,” he said.

“The bottom line here is that making a nuclear-powered submarine is a huge thing to do. There’s no global showroom with these things on offer. There’s no stockpile of them.”

Marles said he was prepared to make difficult decisions – including cuts to planned military purchases – following the strategic review being finalised by former Labor defence minister Stephen Smith and former Defence Force chief Sir Angus Houston. They are due to report to Marles by the first week of February.

“We are working in a context where there is a finite budget,” he said.

“If there weren’t hard decisions coming out of the [strategic review], you’d be wondering about whether it is the significant document which I believe it will be.

“There will be hard propositions that we see in it, and we’re ready for those.”