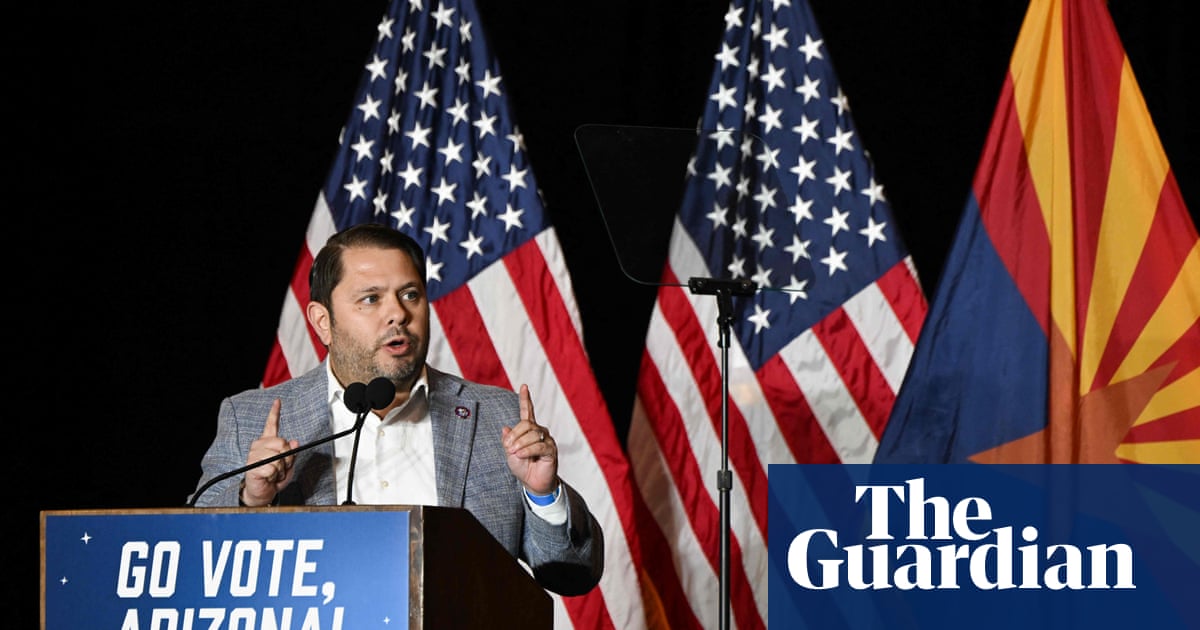 The Democratic congressman Ruben Gallego of Arizona announced on Monday that he will run for the Senate, teeing up a potential battle against incumbent Senator Kyrsten Sinema next year.

Gallego, a marine combat veteran who has served in the House of Representatives since 2015, made the widely expected announcement in a campaign video that was filmed in his Phoenix area congressional district.

In the video, Gallego explains his unlikely journey to the House as the son of an immigrant mother who struggled to make ends meet. If elected, Gallego, who is of Mexican and Colombian descent, would be the first Latino to represent Arizona in the Senate.

“Growing up poor, the only thing I really had was the American dream,” Gallego says. “I’m running to be the senator of Arizona because you deserve somebody fighting for you and fighting with you every day to make sure you have the same chance at el sueño americano.”

The announcement comes after months of speculation. Whispers of Gallego’s plans grew louder last month, when Sinema announced she would switch her party affiliation from Democratic to independent, although she continues to caucus with Senate Democrats.

“At a time when our nation needs leadership most, Arizona deserves a voice that won’t back down in the face of struggle,” Gallego said at the time. “Unfortunately Senator Sinema is once again putting her own interests ahead of getting things done for Arizonans.”

Sinema has not yet officially announced whether she will seek re-election. If she does choose to run as an independent, it could set up a three-way race between Sinema, Gallego and a Republican. It is unclear who the Republican nominee will be, although the former gubernatorial candidate Kari Lake is reportedly considering entering the race. According to the Washington Post, Lake plans to make a final decision at the conclusion of her current court case, which centers on baseless claims of election fraud in the 2022 Arizona gubernatorial race.

One of Gallego’s potential opponents for the Democratic nomination, congressman Greg Stanton, announced on Thursday that he will not run for the Senate seat.

Democrats have notched some important wins in Arizona in recent years, but their candidates have frequently won by narrow margins. Joe Biden carried the state by just 0.3 points in 2020.

Some party members fear that Sinema and Gallego may split the Democratic vote in the event of a three-way race. A recent survey conducted by Public Policy Polling on behalf of Gallego’s campaign showed him running neck and neck with Lake in a hypothetical matchup, while Sinema trailed in a distant third.

The National Republican Senatorial Committee, Senate Republicans’ campaign arm, mockingly celebrated Gallego’s entry into the race on Monday. The group released a statement attacking Gallego’s “radical” views on immigration, and questioning whether the Senate majority leader, Chuck Schumer, will back Sinema if she runs for re-election.

“The Democrat civil war is on in Arizona,” NRSC spokesperson Philip Letsou said.

Gallego would probably enter the general election with strong support from progressives, who have repeatedly attacked Sinema over her close ties to Wall Street. Over the past decade, Sinema has received at least $1.5m in campaign contributions from private equity professionals, hedge fund managers and venture capitalists, and progressives say those donors’ policy preferences have substantially affected the senator’s voting record.

When Democrats were debating the Inflation Reduction Act last year, Sinema successfully lobbied against increasing the tax on carried interest, which are profits collected by private equity executives. A year earlier, Sinema reportedly pushed to raise the income threshold for a new tax on the wealthiest Americans from $5m to $10m.

Most recently, Sinema caught flak for traveling to Davos, Switzerland, to attend the World Economic Forum last week. During one panel discussion, Sinema and fellow senator Joe Manchin, a centrist Democrat of West Virginia, shared a high five over protecting the Senate filibuster, a chamber rule that Republicans have repeatedly used to block key pieces of Biden’s legislative agenda.

“As she jet-sets with the international elite and does favors for her Wall Street donors at the expense of working Arizona taxpayers, Kyrsten Sinema shows us daily that she is only out for herself, and it’s time for new leadership,” said Sacha Haworth, a spokesperson for the Replace Sinema campaign at the progressive Change for Arizona 2024 Pac.

Gallego joined in on criticizing Sinema over her Davos appearance, accusing her of neglecting her duties to Arizonans.

“Kyrsten Sinema hasn’t held a town hall in Arizona for years,” Gallego said on Twitter last week. “Instead, she flies to Switzerland for a town hall with the rich and powerful. Not a Joke!”

The tweet included a link to donate to Gallego’s potential Senate campaign, although he had not yet officially announced his intention to run. As of late last year, Gallego’s House campaign committee had $1.1m on hand, and he can now use that money for his Senate race.