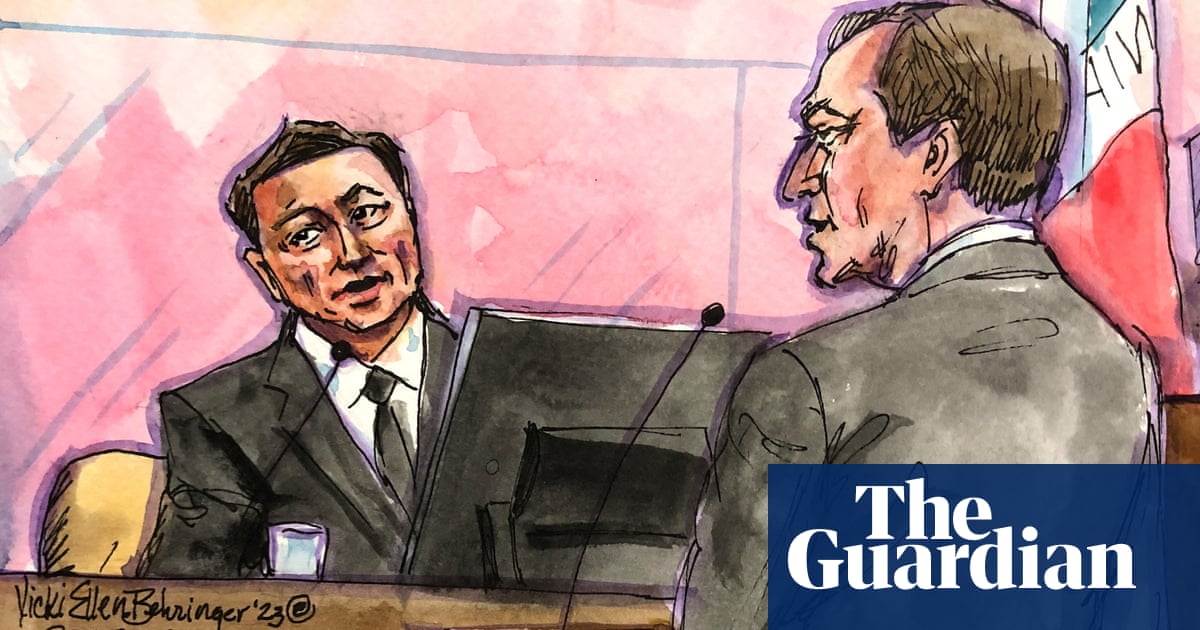 Elon Musk continued his testimony in a trial accusing him of defrauding investors by driving up the price of Tesla stock with his tweets on Monday, saying that he understood that Saudi financiers were “unequivocally” behind his plan to take the electric carmaker private in 2018.

The Tesla CEO’s tweets suggesting he had “funding secured” to buy up Tesla stock at $420 a share are the center point of the trial now in its fifth day in San Francisco federal court.

The trial tests Musk’s penchant for using Twitter to air his sometimes irreverent views, and when the world’s second-richest person can be held liable for crossing a line.

At stake are millions of dollars for shareholders who claim they suffered losses after Musk tweeted in August 2018 that “investor support is confirmed” for the deal.

Tesla’s stock price surged after Musk’s tweets, and later fell as it became clear the buyout would not happen.

Speaking in a soft, halting tone on Monday, Musk said he had been losing sleep during the trial, saying he “had trouble sleeping last night and unfortunately I am not at my best”.

He testified that he had had a meeting with investors from Saudi Arabia’s Public Investment Fund on 31 July 2018 and believed they would back the buyout plan, which would have been a $72m deal. Musk said he believed he could use his ownership of SpaceX to help bolster the deal.

Musk said that Yasir Al-Rumayyan, governor of the fund, later backpedaled on the commitment to take Tesla private.

“I was very upset because he had been unequivocal in his support for taking Tesla private when we met and now he appeared to be backpedaling,” Musk testified.

Attorneys for Al-Rumayyan did not return a request for comment from Reuters.

He added that it was important for jurors to know that he “felt that funding was secured” due to his ownership of “SpaceX stock alone”.

Musk began testifying on Friday, telling jurors that while Twitter, which he bought in October, was the most democratic way to communicate, his tweets did not always affect Tesla stock the way he expects.

“Just because I tweet something does not mean people believe it or will act accordingly,” Musk said.

Even before Musk took the stand on Friday, US district judge Edward Chen had declared that the jurors can consider those two tweets to be lies, leaving them to decide whether Musk deliberately deceived investors and whether his statements saddled them with losses.

He said that when he sent the tweet announcing the deal, he was saying “not that it will happen, but that I am thinking about it” and that funding was secured, in his “opinion”.

A jury of nine will decide whether Musk artificially inflated Tesla’s share price by touting the buyout’s prospects, and if so by how much.

The tweet has already resulted in a $40m settlement with securities regulators.

In Monday’s questioning Nicholas Porritt, a lawyer representing Tesla shareholders, alluded to Musk’s previous use of marijuana, asking if Musk had chosen the $420 proposed share price in an allusion to the slang term for marijuana: “420.”

Porritt asked if he “went with 420 because it was a joke your girlfriend enjoys”. Musk replied he thinks there is “some karma” around the number 420 – which is also a slang reference to marijuana – although he added he didn’t know “if it’s good karma or bad karma at this point”.

He then said the number was a “coincidence” and it represented a 20% premium of Tesla’s share price at the time.

After it became apparent that the money wasn’t in place to take Tesla private, Musk stepped down as Tesla’s chairman while remaining CEO as part of the Securities and Exchange Commission settlement, without acknowledging any wrongdoing.

The case may give a rare view of the inner workings of Tesla and its famous billionaire CEO. It is extremely uncommon for securities fraud cases to go before juries, as usually they are settled out of court.

By going to trial – and putting the flamboyant, outspoken and often brash Musk on the stand – Tesla’s attorneys are taking some bold risks, legal experts said.

“Elon Musk is famously unpredictable,” said law professor Stavros Gadinis, director of UC Berkeley’s Center for Law and Business. “He also has a hot temper. He might say things that do not toe the line” with the main arguments his attorneys are trying to make.

Gadinis said he believed Musk’s lawyers face an “uphill battle” in defending his tweets, because there were numerous inconsistencies in his story.

For instance, Gadinis pointed to Musk’s testimony on Friday that he believed tweets were “the most democratic way” to communicate with Tesla followers and the CEO’s earlier statements that he was trying to protect shareholders by communicating directly. Yet Gadanis said this seemed inconsistent with Musk’s statement in court that he didn’t believe people necessarily acted on his tweets.

“The most convincing theory – and this is what he has to argue against – is that he saw the share price going down and he was not happy with it,” he said. “And he decided to take the issue into his own hands.

“But that’s not how CEOs are supposed to respond,” Gadinis said. “That’s why no other CEO is on Twitter all the time.”