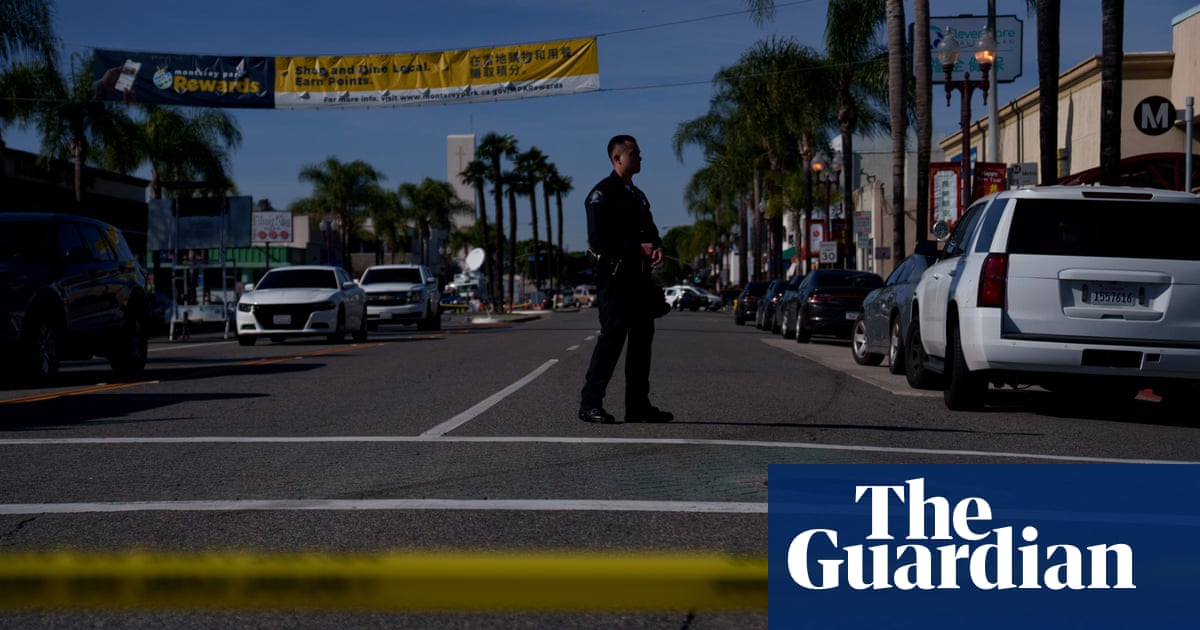 The suspect in a deadly mass shooting at a southern California dance studio on Saturday night died from a self-inflicted gunshot wound on Sunday morning.

The motive for the attack, which left 10 people dead and at least 10 injured, is still under investigation, law enforcement officials said at a press briefing on Sunday evening.

Officials have identified the shooter as as Huu Can Tran, a 72-year-old Asian man.

The shooting took place outside Los Angeles in Monterey Park, California, a majority Asian American community once described as the “first suburban Chinatown”. Authorities said that after opening fire at one dance studio, the shooter appeared to have targeted a second dance venue in nearby Alhambra, California, another majority-Asian American town, where he fled after two people were able to take his gun away from him.

At Sunday’s press briefing, Sheriff Robert Luna and local politicians praised the heroism of the two community members who he said took away the suspect’s gun at that second scene, possibly preventing another tragedy. “This could have been much worse,” Luna said.

The Tsay family, who run the Lai Lai Ballroom and Studio in Alhambra, said in fact that only one person disarmed the gunman: 26-year-old Brandon Tsay, a computer coder who works at the ticket office a few days a week and was in the office off the lobby when the gunman entered the building.

“It was just my son. He could have died,” Brandon’s father, Tom Tsay, told the New York Times. “He’s lucky, someone was watching over him.”

Brandon’s older sister, Brenda, who runs the business, told the paper that security camera footage showed a prolonged struggle between Brandon and the gunman. “He kept coming at him, he really wanted the gun back,” she said of the gunman.

Judy Chu, the US congresswoman who represents Monterey Park, told community members “you are no longer in danger” but said that the reason two community dance studios were targeted remained unclear.

“What was the motive for this shooting?” Chu asked. “Was he a domestic violence abuser? How did he get these guns? Was it through legal means or not? These questions will have to be answered in the future.”

Two weapons have been officially identified so far, including a handgun with a high-capacity ammunition magazine, which allows a shooter to fire more rounds without pausing to reload. The weapon recovered from Alhambra location was described as magazine-fed semiautomatic assault pistol with a high-capacity magazine attached, a weapon that may be illegal in California, Luna said.

Another firearm, found in the white van where the suspect was discovered this morning, was also a handgun, Luna said.

Swat vehicles and other law enforcement cars surrounded the van for several hours on Sunday afternoon before officers entered it, an operation that local TV news cameras broadcast live.

Law enforcement officials said five men and five women had died at the dance studio, and that a further 10 people had been wounded and taken to local hospitals.

Dance instructors who taught classes at the Star Ballroom Dance Studio in Monterey Park told news outlets that the ballroom studio served a predominantly older, Asian American clientele. The coroner’s office was “still in the process of identifying” the victims who were killed, Luna said, but many of them appeared to be in their 50s and 60s.

The brutal attack in the center of town came during a celebration of the lunar new year, a moment marked by billions of people in Asian and Asian diaspora communities around the world.

The shooting, the deadliest in months, also came after years of anxiety for Asian Americans across the US, who have witnessed an increase in reported incidents of hate crimes targeting Asian Americans, as rightwing US politicians, including Donald Trump, labeled Covid-19 the “China virus”.

A separate study by the Center for the Study of Hate and Extremism found that hate crimes against Asian Americans in 2021 increased 39% nationally, compared with 2020.

The Monterey Park mayor, Henry Lo, described the shooter’s death as “justice” but said the recovery process was “just beginning”.

“Our priority is to make sure those victims, their family members, are given the assistance they need to heal and get over their trauma,” Lo said, referencing what he expects will be “a long process of healing as a community”.