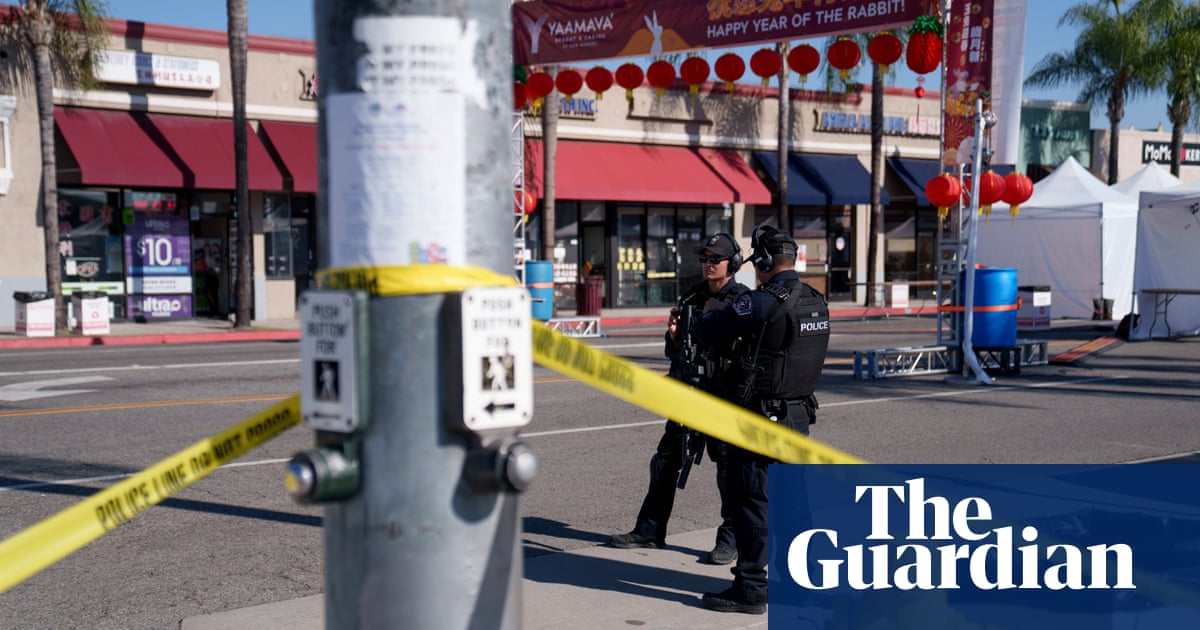 As the sun settled on Sunday evening, the only reminders of lunar new year revelry were a few houses adorned with bright red and gold paper lanterns. Inside the Hong Kong grocery store, just a five-minute walk from what the Los Angeles county sheriff described as perhaps “one of the most heinous cases” in the county’s history, an uptempo remix of Auld Lang Syne played to mark the holiday.

Nearly 12 hours earlier, 10 people were killed and at least 10 others hospitalized after a gunman opened fire in a ballroom dance studio in Monterey Park, a small majority-Asian American city near Los Angeles.

Monterey Park is a tight-knit community, part of a cluster of small cities that sit in the San Gabriel Valley east of Los Angeles, all with a burgeoning Asian American community, mostly from China. The city of 60,000, where around 65% of residents are Asian American, is consistently ranked as one of the best and most peaceful places to live in the United States.

The massacre ended what had been the city’s first in-person celebration of the lunar new year in three years, since the pandemic began. The lunar new year festival, one of California’s biggest, had been scheduled to conclude Sunday. But the events were cancelled “out of an abundance of caution and in reverence for the victims”, the Monterey Park police chief, Scott Wiese, said. Another celebration that was scheduled for Sunday was also cancelled.

“Because of the respect for the dead, you cannot be celebrating after something like that,” Bob Fernando, a Monterey Park resident, told the Guardian while waiting for an early-afternoon press conference at city hall.

By midday Sunday, a huge manhunt had concluded and led police to surround a white van. Sheriff Robert Luna suggested a white van was a vehicle of interest as authorities released a photo of the possible shooter wearing glasses and a winter hat. Luna identified the suspect as Huu Can Tran, 72.

Authorities said the Tran had gone to a second dance facility not far away in Alhambra after opening fire at the first studio Saturday night, law enforcement officials said. The photo released by authorities was captured at the second location where attendees wrestled a gun away from a male Asian suspect.

On Sunday afternoon, as reporters and Monterey Park residents awaited answers from law enforcement, investigators with the sheriff’s department and FBI were placing small yellow and white markers in the ground, identifying shell casings and blood that could give authorities an understanding of what happened on Saturday night.

At a nearby senior citizens’ center, Monterey Park city officials and dozens of police officers were escorting groups of people inside to receive mental health and trauma support.

The city’s motto is “pride in the past, faith in the future”, but for many the violence and horror of Saturday night has shaken that faith. The mass shooting, the deadliest since 21 students and teachers were killed in Uvalde, Texas, last year, has become too common.

For Fernando, this sort of incident wasn’t so surprising. He recalls living in South Carolina when nine Black Americans were killed by a white shooter during a church meeting.

“There are shootings all the time,” he said. “The media makes it feel like it’s so close. I don’t feel unsafe any more because it feels so normal.”

Zhang, 33, said he and his friends had been out enjoying Saturday’s festival and had not heard any of the gunshots. “There needs to be more safety. This sounded personal,” he said.