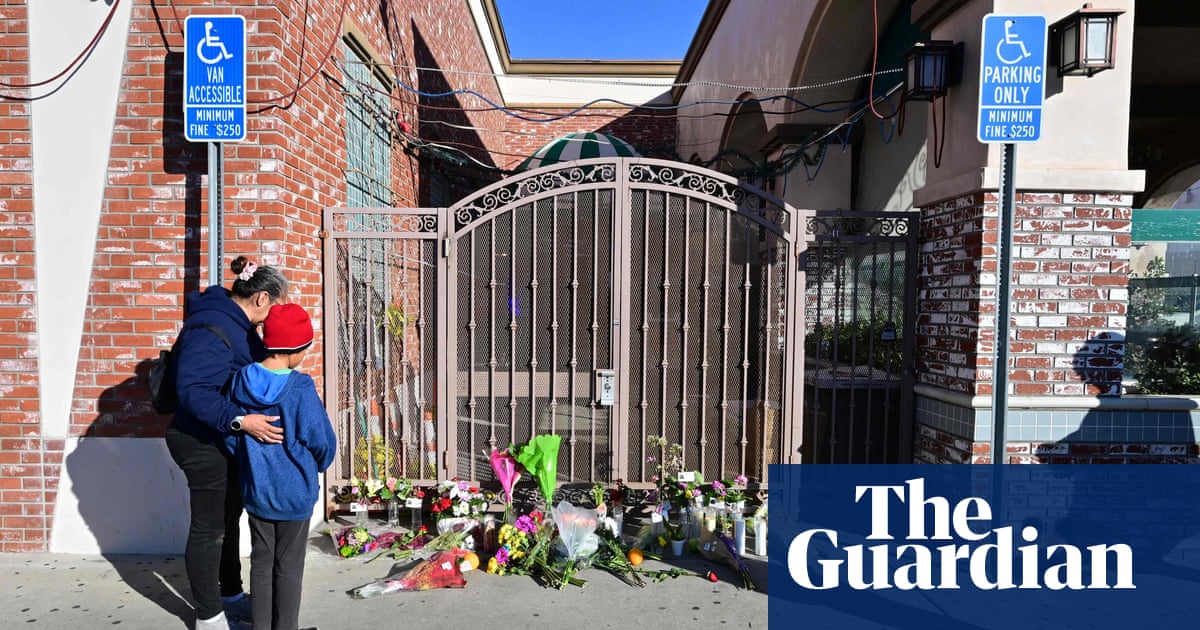 The death toll in a mass shooting at a ballroom dance studio in California has risen to 11 people, after health officials said that one of the people wounded in the shooting had died.

Authorities said the motive for what one lawmaker called “the worst mass shooting in Los Angeles county history” remains unknown. The 72-year-old shooter died by suicide the morning after the attack, authorities said, after being stopped by police in a nearby town. Law enforcement officials searched his home in Hemet, and found a rifle, hundreds of rounds of ammunition, and evidence that he was manufacturing homemade gun silencers.

The gunman had “a limited criminal history” but had been arrested in 1990 for illegal gun possession, Los Angeles county sheriff Robert Luna said on Monday.

“Did he plan this? Was it the day of? Was it a week before? What drove a madman to do this? We don’t know,” Luna said, saying that detectives were continuing to examine the case.

Whether the gunman was related to any of his victims, or motivated by jealously or relationship problems, remains under investigation, Luna said.

People who knew the shooter told news outlets that he did have a personal connection to Star Ballroom, the first dance studio he attacked, and that he had met his ex-wife there while dancing two decades ago. Evidence showed the gunman had used a large capacity magazine to fire at least 42 times during his attack on a ballroom dance studio, Luna said. Officials said 10 people died and 10 people were injured at the scene, one of whom later died.

As of late Monday, the identities of only five of the 11 victims had been made public. Authorities named three women who had died: My Nhan, 65, Lilan Li, 63, and Xiujuan Yu, 57, and one man, Valentino Alvero, 68. The names of other victims have not yet been released, as family members are still being notified, Luna said.

According to friends and colleagues, the beloved manager of the dance hall was also among the 11 victims of Saturday’s gun massacre, which took place during a lunar new year celebration in Monterey Park, a majority Asian American community in the Los Angeles area.

Ming Wei Ma, known to instructors as “Mr Ma”, died when a 72-year-old gunman entered the Star Ballroom and opened fire. A friend told CBS News that Ma “was the first to rush to try to stop the shooter”.

The report of Ma’s death was corroborated by Dariusz Michalski, a professional ballroom dancing instructor at the Star Ballroom, who posted to Facebook a photograph of the two together with a heartfelt tribute to a man he called his “friend”.

“Mr Ma, your love, joy for people will never be forgotten,” he wrote. “Your dance and signing passion will never disappear. We will never forget your shout in the studio: ‘I love you.’ You will be greatly missed. I love you my friend.”

One of the survivors, a 73-year-old woman, was released from the hospital on Monday, LAC+USC Medical Center said in a statement late in the afternoon.

Monterey Park police chief Scott Wiese, who faced questions about why it had taken his department so long to release information about the shooting in the hours after the Saturday night attack, said the carnage had left their small department shaken.

Wiese said he and other members of the department were now focusing on “officer wellness” and making sure the first responders, who had run into a dance hall filled with people who had been injured or shot to death, were getting support.

New details about the gunman

Authorities identified the gunman as an Asian man named as Huu Can Tran. He had lived in the Los Angeles area since at least the early 1990s, and had operated a trucking business, according to public records.

Authorities said that minutes after opening fire at the Star Ballroom, the shooter appeared at a second dance studio in nearby Alhambra, where he was disarmed by a single worker now hailed for saving lives.

The weapon confiscated was a “a 9mm caliber semi automatic Mac 10 assault weapon”, with unspecified modifications, Luna said. The sheriff previously said the weapon was likely illegal under California law, but noted on Monday that the legality of specific weapons, weapon modifications and ammunition types has changed over time.

More details about Tran have begun to emerge. Henry Lo, the mayor of Monterey Park, once described as the first suburban Chinatown, told CNN on Monday that the shooter was “a frequent attendee of the dance hall”.

Several people who knew the shooter, including his ex-wife, told media outlets that he had a “hot temper”, and was sensitive about how he was perceived. The police department in the California town where he lived said he had repeatedly visited a police station in early January to complain that his family had tried to poison him.

Tran’s ex-wife said she had met him while dancing at the Star Ballroom two decades ago, and that he had offered her dance lessons, CNN reported. The news outlet said it was not naming his ex-wife because of the sensitivity of the incident, and that the couple had divorced in 2005.

His ex-wife said he was never violent towards her, but that he “would get upset if she missed a step dancing because he felt it made him look bad”, CNN reported.

A longtime tenant of Tran’s in Los Angeles described him as an aggressive and suspicious person who had few friends, and said that ballroom dancing was his only social activity. The tenant told Reuters that Tran complained that people at the Star Ballroom studio were talking behind his back.

“He was a good dancer in my opinion,” the tenant said. “But he was distrustful of the people at the studio, angry and distrustful. I think he just had enough.”

Authorities were still investigating how the shooter obtained the weapons he used, as well as investigating any warning signs or changes in his behavior in the weeks prior to the shooting.

In early January this year, the shooter made two visits to the lobby of the police department in Hemet, California, where he lived, “alleging past fraud, theft, and poisoning allegations involving his family in the Los Angeles area 10 to 20 years ago”, the department said in a statement.

“Tran stated he would return to the station with documentation regarding his allegations but never returned,” the department said.

Public and business records showed that the 72-year-old had run a trucking company with an address in Monterey Park, and that he had lived in the Los Angeles area since at least the 1990s.

The ballroom dance studios that were targeted, one in Monterey Park and a second in nearly Alhambra, were praised as vibrant social centers, whose patrons included many middle-aged and elderly couples who loved to dance.

Relatives of My Nhan, one of the women killed at Star Ballroom, said on social media that they were “broken” by her death.

“It’s still sinking in what happened to Mymy,” the family said in a statement posted to Twitter by Dallas-based WFAA reporter Tiffany Liou, who said the tragedy had struck “close to home” and that her husband’s family was “hurting beyond measure”. Liou said Nhan was the first of the victims shot and killed.

The statement continued: “She spent so many years going to the studio in Monterey Park on weekends. It’s what she loved to do. But unfairly, Saturday was her last dance.

“If you knew her, you knew her warm smile and kindness was contagious. She was a loving aunt, sister, daughter and friend. Mymy was our biggest cheerleader.”

The statement, signed by “the Nhan and Quan family”, concludes with an expression of gratitude for people’s thoughts and prayers, and the support of neighbors and community.

The department said that three additional victims from the shooting were still being treated at the LAC+USC Medical Center. “One remains in serious condition. The other two are recovering,” the department said.

The Monterey Park killings were among 36 mass shooting in the US so far this year, according to the Gun Violence Archive. The archive classifies shooting in which at least four people are wounded or killed – not counting any attackers – as mass shootings. There were three other mass shootings that injured at least four people during a single twelve-hour period this past weekend, according to the Gun Violence Archive: two in Louisiana, and one in Mississippi.

At 72, Tran was the second-oldest mass killer in the US over the last nearly 20 years, According to a database compiled by the Associated Press, USA Today and Northeastern University. In 2011, a 73-year-old murdered five people in Yuma County Arizona before killing himself.

The Violence Project, which tracks a subset of public mass-casualty shootings in the United States, identified another shooter in his 70s, a retired miner who killed five people in a store in Kentucky in 1981, in an incident motivated by a personal dispute.

The median age of mass shooters in the Violence Project’s database is 32. Almost all of them were men.