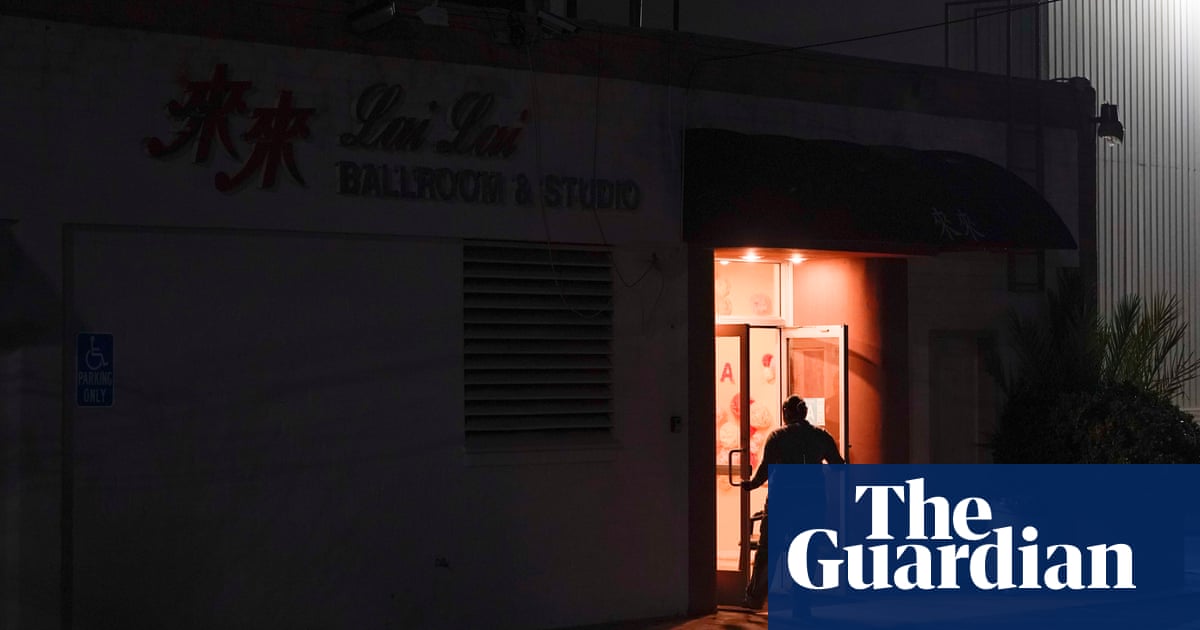 A California dance hall worker who disarmed a shooter who had killed at least 10 people at another nearby ballroom just minutes before has described the encounter as harrowing.

Brandon Tsay was working in the lobby of the Lai Lai Ballroom and Studio in Alhambra when Huu Can Tran, named by police as the gunman in Saturday night’s massacre at a dance hall in Monterey Park, entered and pointed a semi-automatic pistol at him.

“He was looking at me and looking around, not hiding that he was trying to do harm,” Tsay, 26, told the New York Times. “His eyes were menacing.

“How [the weapon] was built and customized, I knew it wasn’t for robbing money. From his body language, his facial expression, his eyes, he was looking for people.”

Tsay was unaware that the man had arrived straight from the Star Dance Studio in Monterey Park, another majority Asian community of southern California, where he opened fire on patrons at an event celebrating lunar new year. Five men and five women were killed there, and at least 10 others were wounded, authorities said.

Authorities on Monday morning had released the names of two women killed at the Star studio: My Nhan, 65, and Lilan Li, 63.

Officials had not publicly identified the eight other victims pending notification to their relatives, but authorities advised they were two women in the 60s, one woman in her 50s, two men in their 60s, and three men in their 70s.

Credible news and social media reports identified a third victim of the killings at the studio as manager Ming Wei Ma, known to instructors as “Mr Ma”.

Police later found the 72-year-old killer dead from an apparent self-inflicted gunshot wound in a van in Torrance, about 30 miles away.

Tsay said he was in a lobby office of his family’s studio, watching the ballroom, which only had three people still dancing as the studio’s own New Year event wound down, when he heard the entrance door swinging behind him.

He said he heard a clang that sounded like two metallic objects hitting each other, turned to see the man with his gun raised, and knew he had to act.

In an interview with ABC’s Good Morning America on Monday, Tsay, a coder, described how the pair fought for about a minute and a half before he was able to wrest away the gun.

“I lunged at him with both my hands, grabbed the weapon, and had a struggle,” he said.

“Finally, at one point I was able to pull the gun away from him, shove him aside, create some distance, point the gun at him, intimidate him, shouting, ‘Get the hell out here. I’ll shoot. Get away. Go.’”

Tsay said the man lingered for a moment or two, then turned and left. At that point, Tsay said, he called the police while still holding the gun.

“I was shaking all night – I couldn’t believe what happened,” he said, adding that he has bruising on his body, his face and the back of his head.

At a press conference late Sunday, with information still scant, Los Angeles county sheriff Robert Luna said he believed there had been two citizens who confronted the shooter at Lai Lai. But Tsay’s account and security footage appeared to show it was only him.

“It was just my son. He could have died,” Brandon’s father, Tom Tsay, told the New York Times. “He’s lucky – someone was watching over him.”

Luna had no doubt the confrontation prevented greater bloodshed at the hands of an attacker whose motivation remained under investigation late Sunday.

“They saved lives,” the sheriff said. “This could’ve been much worse.

The mayor of Monterey Park, Henry Lo, publicly speculated Monday that the killings possibly may have resulted from a domestic dispute involving the shooter. Lo said that man was “a frequent attendee of the dance hall”.

The mayor also told CNN: “My understanding is that he had met his ex-wife at the location many years ago, but we don’t know why he did what he did. Was it an issue of [being] disgruntled, or the issue of domestic violence? We don’t know, unfortunately.”

Tsay told the Times he was heartbroken for the community in which his family had opened the studio, named Lai Lai by his grandmother, or “come, come” in Chinese, three decades earlier.

“We have such a tight-knit community of dancers,” he said. “It feels so terrible something like this happened, to have one of our individuals try to harm others.”

Others who attended lessons at the Star studio painted a picture of a friendly, community-based facility that acted as a de facto social club for locals and dance enthusiasts. The shooting took place during what should have been a “joyous” event celebrating lunar new year, according to Elizabeth Yang, a Monterey Park lawyer who took classes there.

Sunday’s killings in Monterey Park came during the 36th mass shooting in the US so far this year, according to the Gun Violence Archive. The archive considers shootings in which at least four people are wounded or killed – not counting any attackers – to be mass shootings.