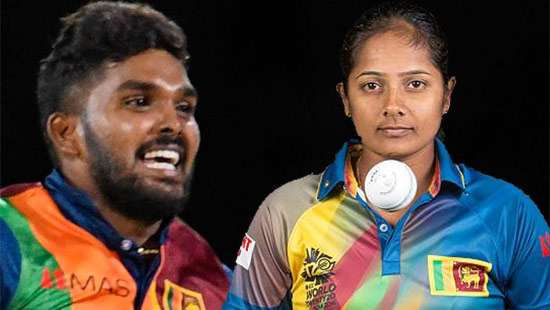 All-rounder Wanindu Hasaranga and left-arm spinner Inoka Ranaweera were the only Sri Lankans named in the International Cricket Council's (ICC) men's and women's teams of the year respeectively, announced today.

Hasaranga was instrumental in Sri Lanka's Asia Cup victory earlier in the year before also being among the leading wicket takers at the T20I World Cup 2022, while Ranaweea finished 2022 with 27 wickets in 19 T20Is, averaging 13.85 and conceding runs at an economy rate of 5.75.

England's T20I World Cup 2022 winning skipper Jos Buttler was named as captain of the Men's Team of the Year, with the Player of the Tournament Sam Curran also being included.

The losing finalists Pakistan have two players in the team, opener Mohammed Rizwan and Haris Rauf, with three Indians, Virat Kohli, Suryakumar Yadav and Hardik Pandya also in the XI.

New Zealander Glenn Phillps, Zimbabwe's Sikandar Raza and Josh Little of Ireland round out the team.

Kiwi Sophie Devine was named as captain of the Women's Team of the Year, that includes three Australians in Beth Mooney, Ash Gardner and Tahlia McGrath.