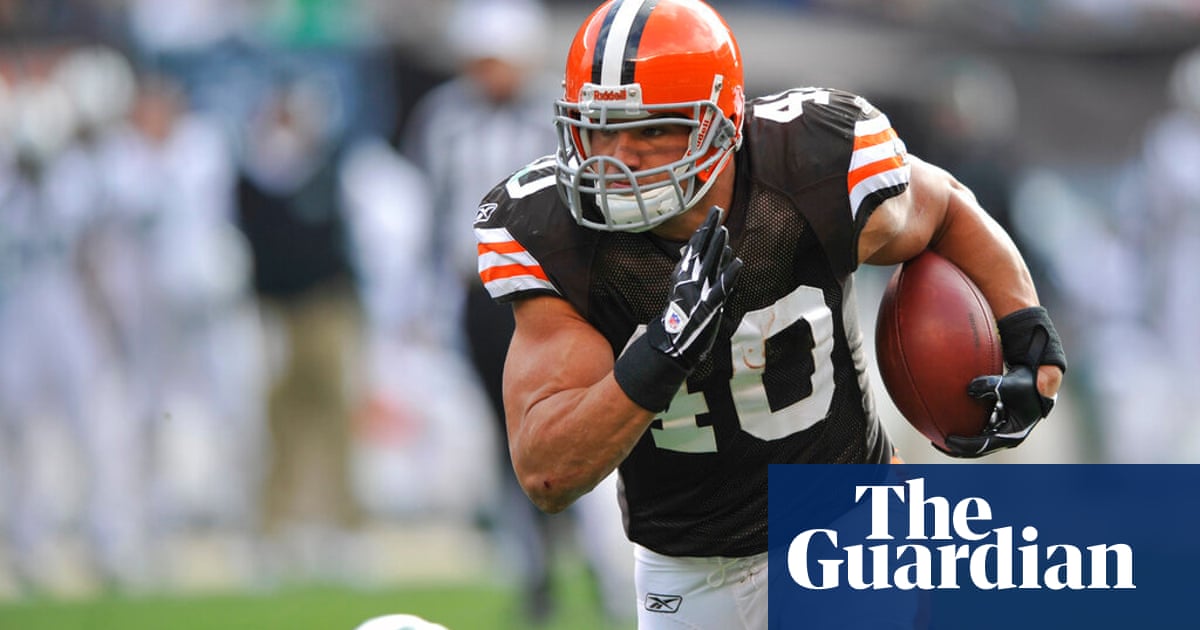 A former NFL player who almost died while rescuing his children from drowning after a swimming accident in Florida recently has been released from the hospital.

The staff of Baptist hospital in Pensacola, Florida, had discharged Peyton Hillis – the ex-member of the Cleveland Browns – late last week, according to social media updates from his girlfriend, Angela Cole, and sister, Hayley Davis.

Cole wrote about Hillis’s hospital release on Instagram, which also described her immense gratitude at the work that the hospital’s doctors and nurses performed on him.

“You not only saved Peyton’s life – you made it a priority to make sure that his family and I were [OK amid] your busy schedules,” Cole wrote. “Thank you for making all the difference in our lives.”

Hillis’s children had fallen into distress in waters near Pensacola’s Portofino island resort while on vacation with their family on 5 January when the former running back and his sister, Davis, jumped in to try to pull the youngsters out.

The children ultimately were unharmed, and Hillis’s actions earned him praise from the worlds of both parenting and sports, including from former NFL player and media analyst Ryan Clark, who called him “a hero”. But two lifeguards and a firefighter had to go into the water and pull out Hillis before he was flown by helicopter to Baptist, where he arrived unconscious and in critical condition with injuries to his kidneys and lungs.

Davis was also brought to the hospital, though she appeared to be in better condition than Hillis when taken there. She published a Facebook post on Friday that described the frantic scene among her family as first responders gave aid to her brother.

“I remember seeing Peyt laid out on the sand unable to move and my mom having to run back and forth between us as the medics helped each of us,” Davis wrote. “I just kept praying that Peyt would be ok.”

Davis’s post on Friday also said that it was clear her prayer had been answered and that her brother’s health had “all improved – truly a miracle!!”

“All I can say is GOD HAS BEEN SO GOOD TO US!!” the post read. “Peyton was discharged today from the hospital!”

Hillis played his college football at the University of Arkansas before joining the NFL as a 2008 seventh-round draft selection by the Denver Broncos.

After the Broncos traded Hillis to the Browns in his third year in the league, the bruising runner enjoyed a breakout season, rushing for nearly 1,200 yards and 11 touchdowns. The Arkansas native also chipped in 477 receiving yards and two touchdown catches while landing on the cover of the Madden football video game that hit store shelves in August 2011.

Hillis spent four more seasons in the NFL with the Browns, Kansas City Chiefs and New York Giants, but he never again quite recaptured his form during his memorable 2010 campaign. That caused many fans to associate him with the purported Madden curse, which involves players featured on the cover of the annually updated series’ games going on to suffer a drop in on-field performance.

Hillis and his ex-wife, Amanda Hillis, had two children. He has more recently been dating the singer-actor Cole, with whom he co-starred in a 2021 independent film named The Hunting.