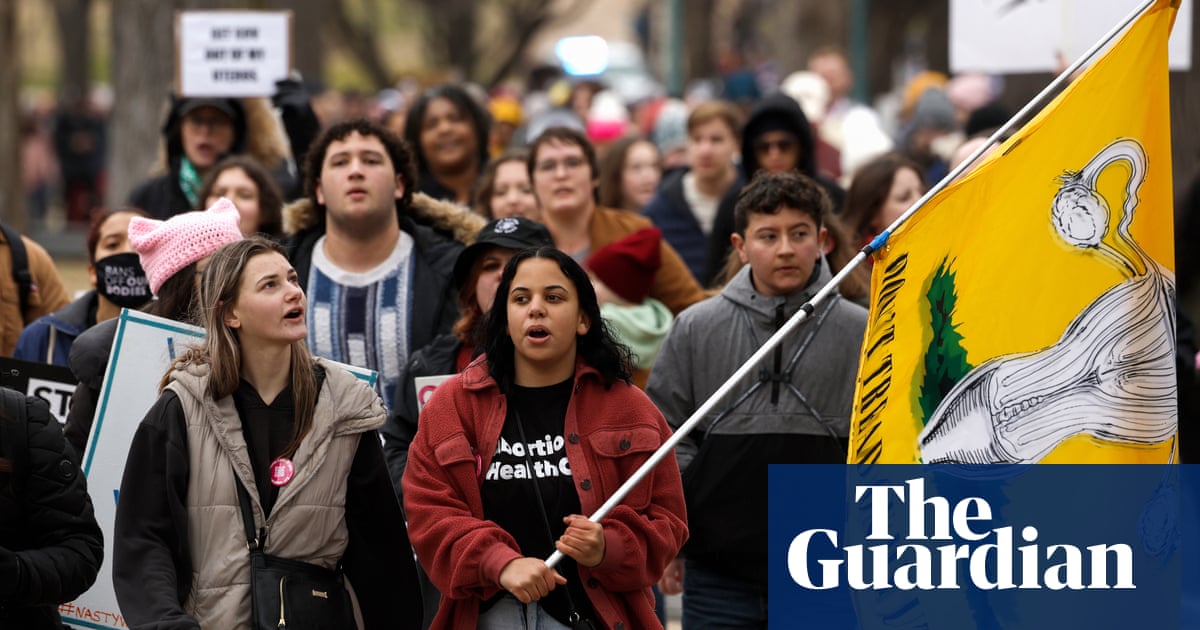 Thousands of protesters gathered across the United States to protest the end of the federal right to abortion – marching on the the 50th anniversary of the Roe v Wade supreme court decision that made abortion a constitutional right in 1973, but which was struck down last year.

At more than 200 Women’s March events in 46 states, demonstrators condemned the court’s decision, which leaves it up to individual states to decide whether to protect, ban or restrict abortion rights. Since last year’s startling decision from the conservative-dominated bench, abortion has been banned or severely restricted in 14 states, after the ruling on 24 June.

Carmona added: “But as the fight turns to the states, they are going to learn that the overwhelming majority of Americans in all states support abortion rights – and women will fight to protect our rights and our lives.”

Activists from Harriet’s Wildest Dreams, a police-abolitionist group wearing colorful bomber jackets, led the march in Washington, with chants such as: “Not the church, not the state, the people must decide their fate.”

They led a thick crowd of protesters who filled downtown streets, marching from Freedom Plaza to the White House, holding banners that read “forced vasectomies: they prevent abortions and they’re reversible!” and “more women die from misogyny than abortion”.

“I’m here because it’s unfair men are taking away our rights over our own bodies,” she said, referring to male-dominated courts and legislatures.

Saskia Lodder, 68, held a sign that read: “I’ve been marching 50 years to keep politics and religion out of women’s healthcare.” She said she had been devastated on the day the federal right to abortion was overturned. “I’m a nurse. No man in a suit or black robe should be able to make these deeply personal decisions on a woman’s behalf,” she said.

In Madison, Wisconsin, designated as Sunday’s main event, thousands of protesters flooded the streets, with signs that read “abortion is healthcare” and “my body, my soul, my life, my choice.”

Since the constitutional right to abortion ended last summer, Wisconsin has been operating under a near-total ban written in the 1800s. Wisconsin’s Democratic attorney general, Josh Kaul, and governor, Tony Evers, are fighting the ban in court. Prior to last June’s supreme court decision, abortions were legal in Wisconsin until 20 weeks into the pregnancy.

Women’s March organizers chose Wisconsin to highlight the state’s forthcoming state supreme court election, which could be pivotal, and mobilize protesters and activists.

“The upcoming supreme court election in Wisconsin this spring will determine the balance of power on the [state] court, and the future of abortion rights in the State,” organizers said, adding: “We are taking the fight to the states. From Wisconsin, to Nebraska, to Georgia, to Arizona and Texas, women and our allies are defending abortion rights where they still stand, and working to put measures on the ballot to regain abortion rights in places where politicians are putting their agendas over the will of the people.”

The events follow the annual anti-abortion March for Life demonstration, which took place on Friday in Washington DC, where thousands of anti-choice activists turned up to celebrate the movement’s success.

To mark the 50th anniversary of the landmark Roe v Wade ruling, the vice-president, Kamala Harris, delivered a speech in Tallahassee, Florida, another state with tight restrictions on abortion that will get tighter if state Republicans have their way.

“Since our founding, we have been on a march forward … to secure freedom and liberty for all. This fight will not be inevitable, this will not just happen – it takes steadfast determination and dedication. So today, we are fighting back,” she said.

With Republicans controlling the House of Representatives, there is little hope of federal legislation to protect abortion rights nationally.

But Harris added: “President Biden has issued a presidential memorandum. Members of our cabinet and our administration are now directed to identify barriers to [abortion] access and recommend actions to make sure that doctors can legally prescribe, doctors can dispense and women can secure safe and effective medication,” she added.