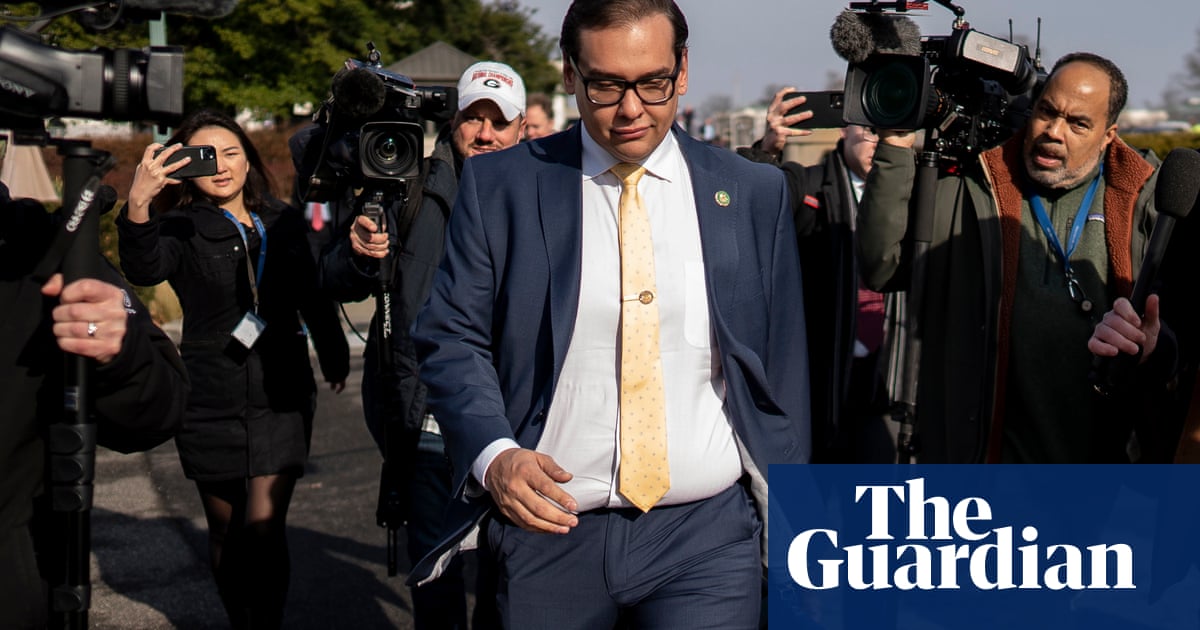 That was how Leslie Jones, guest host of Comedy Central’s The Daily Show, summed up just one of this week’s revelations about George Santos, a US congressman whose shameless fabulism has stunned Washington, a capital that thought it had smelt every flavour of mendacity from politicians.

“What does this man have to do get thrown out of Congress?” Jones asked, echoing the thoughts of many. “He’s a fucking liar.”

Yet the answer is that, far from being expelled from the House of Representatives, Santos, 34, was rewarded with assignments on two of its committees. The vote of confidence appeared to be an expedient calculation by the House speaker, Kevin McCarthy, aware Republicans have such a slim majority that even losing one seat would make it much harder to pass legislation.

But it was also a decision, critics said, that showed the party of Abraham Lincoln and Dwight Eisenhower has lost its moral compass. Stuart Stevens, a political consultant and author of It Was All a Lie: How the Republican Party Became Donald Trump, said: “Santos is a perfect example of the collapse of the Republican party.

“It shows that the party stands for nothing. It seems like a million years ago but there was a time when we said character was destiny. Nobody even knows who this guy is. We literally don’t know his real name.”

Indeed, as recently as four years ago, Santos was introducing himself publicly as “Anthony Devolder” – a combination of his middle name and his mother’s maiden name. It is just one strand in a web of deceit that makes the protagonists of Catch Me If You Can, The Talented Mr Ripley and Pinocchio look as honest as the day is long.

That web went mostly unnoticed during Santos’s election campaign in New York last year but has unravelled with dizzying speed in the past few weeks, forcing him to run a daily gauntlet of reporters on Capitol Hill and to admit lying about his family heritage, college education and job experience.

For instance, Santos made the false and offensive claim that his maternal grandparents escaped from the Holocaust. In fact, they were born in Brazil, and he has now been forced to acknowledge that he was raised Catholic.

But when Santos was caught falsely claiming to be Jewish, he told the conservative Fox News network that he was not actually lying because he had merely referred to himself as “Jew-ish” – presumably unaware that he was borrowing an old joke from the British polymath Jonathan Miller, who once declared: “I’m not really a Jew; just Jew-ish.”

Santos wrote on Twitter that his mother was killed in the September 11, 2001 terrorist attack on New York but subsequently said she died on 23 December 2016. A review of his mother’s employment record found no evidence of her ever working at or near the World Trade Center, while her immigration history suggests that she was not even on American soil on 9/11.

Last October, Santos told the USA Today newspaper: “I am openly gay, have never had an issue with my sexual identity in the past decade, and I can tell you and assure you, I will always be an advocate for LGBTQ+ folks.” It subsequently emerged that he had been married to a woman, whom he divorced in 2019.

Santos claimed to have briefly attended Horace Mann, an elite private preparatory school in New York, but the school has no record of him. He said he has academic degrees from New York University and New York’s Baruch College and was even a star player on the Baruch volleyball team – again, there is no record of him having studied at either institution or playing volleyball.

Santos also said he had worked for the top Wall Street firms Citigroup and Goldman Sachs, but neither company could find any records verifying this. In an interview with the New York Post newspaper, Santos said: “My sins here are embellishing my résumé. I’m sorry.”

Santos portrayed himself as a successful property investor whose family owned several buildings. But court records indicate that Santos was the subject of three eviction proceedings in Queens, New York, between 2014 and 2017 because of unpaid rent.

In 2020 Santos was hired by Harbor City Capitol Corp, an investment firm based in Florida. The company ceased operating in 2021 after it was accused by the Securities and Exchange Commission of being a multimillion-dollar Ponzi scheme.

The scandals keep coming. On Wednesday Santos was accused of taking $3,000 from an online fundraiser intended to help save the life of a sick dog owned by Richard Osthoff, a disabled military veteran. Santos called “reports that I would let a dog die … shocking and insane” – but did not directly deny them.

On Thursday old acquaintances of Santos said he had competed as a drag queen in Brazilian beauty pageants 15 years ago, opening him to charges of hypocrisy: he has endorsed Florida’s hardline “don’t say gay” bill and aligned himself with far-right Republicans hostile to transgender rights. Again he issued an angry denial, saying the media “continues to make outrageous claims about my life”.

And on top of everything, law enforcement authorities in Brazil have said they intend to reinstate fraud charges against Santos relating to a case involving a stolen chequebook in 2008. Eric Swalwell, a Democratic congressman from California, has branded him “a wanted international criminal”.

Even seasoned observers are aghast at the outlandishness. Monika McDermott, a political science professor at Fordham University in New York, said: “This goes beyond anything I believe I’ve ever seen. We see a fair share of dissembling or chest beating in various ways but to outright lie about your résumé and continue to do so even once caught in such lies really takes a certain amount of courage – let’s call it that.”

Democrats have asked the House ethics committee to investigate Santos. State and local Republican leaders in New York have called on him to resign after lying to the voters who elected him. But the congressman has dug in his heels and refused.

McCarthy and Republican leaders in Washington have said they will handle the situation internally. But they know the political stakes. They hold just a 10-seat majority and know that Santos represents a district that could flip to Democrats in a special election.

McDermott added: “It’s all in the numbers. I don’t see how they can do anything about this without risking their slim majority in the House and so they’re going to have to stand behind him as much as they can. At this point they’re unlikely to do anything about it.”

Notably, while some congressional Republicans have given Santos the cold shoulder, he appears to have found comfort with the House Freedom Caucus and extremist Maga (Make America Great Again) wing.

Zac Petkanas, senior adviser to the House Accountability War Room, a rapid-response watchdog, said: “People are rightly focusing on the lies he’s told about his résumé, where he got his money from, where he went to school and all of that but he’s also someone who participated in the January 6 rally.

“He’s not just a random member of Congress; he’s in the Maga contingent that has taken control. He’s in the Marjorie Taylor Greene, Matt Gaetz, Lauren Boebert cabal. The lies, the conspiracy theories, the encouragement of political violence is part of the brand of this breed of politicians that is wielding such influence over the new Congress.”

Some see Santos not as an outlier or unicorn but the natural culmination of the Republican party’s descent over the past decade. Donald Trump, who burst into political prominence with the racist lie that Barack Obama was born outside the US, made more than 30,000 false or misleading claims during his presidency, according to the Washington Post.

One of his senior advisers, Kellyanne Conway, infamously coined the phrase “alternative facts”. Some 147 Republicans voted to overturn the results of the 2020 presidential election; McCarthy was among them. And during last year’s midterm elections, Republican candidates such as Herschel Walker were caught in numerous falsehoods.

In this sense Santos represents a difference in degree, not a difference in kind. Kurt Bardella, a Democratic strategist, said: “There isn’t a better living mascot for what the Republican party is turning itself into than George Santos – one that is completely divorced from truth and reality, one that openly embraces conspiracy theory, one that time and again rejects fact and science.

“When you have the standard bearer for your party be someone like Donald Trump, who lies about everything from classified documents to the crowd size of his inauguration and everything in between, it’s only a matter of time before people emerge who completely bathe themselves in lies.”

Bardella, a former senior adviser for Republicans on the House oversight committee, added: “It’s hardly surprising that someone like Santos has emerged and successfully conned his way into elected office and the Republican party leadership’s refusal to do anything or say anything about it only encourages copycats to follow.”