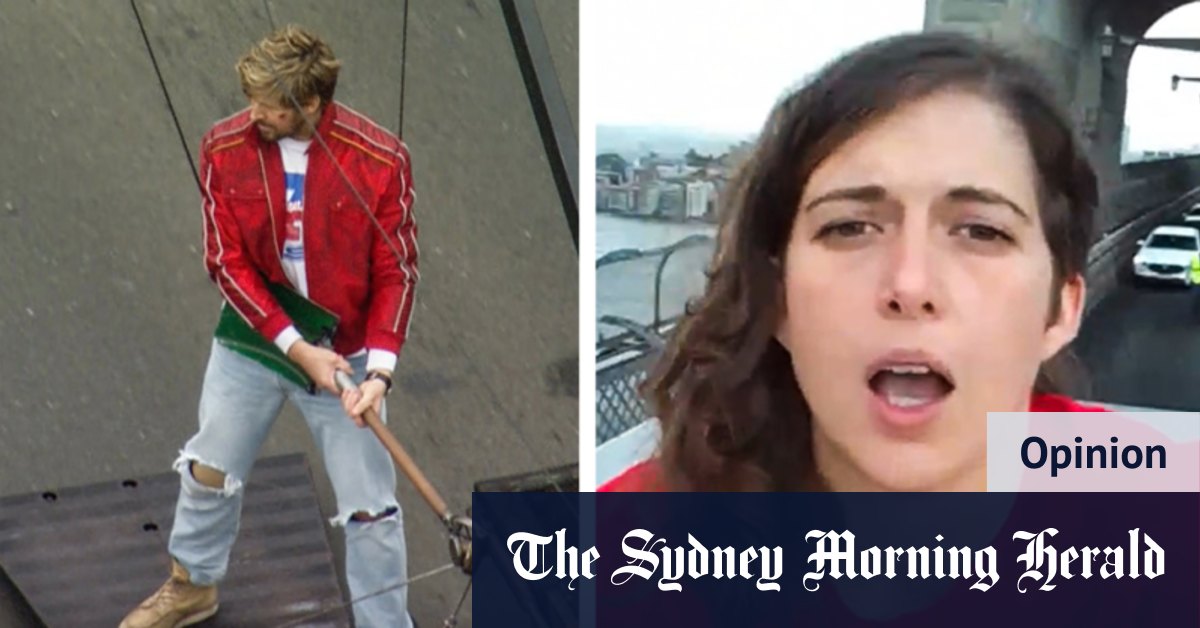 In December last year, a young woman named Violet Maree Coco was sentenced to 15 months’ jail and fined $2500 for temporarily obstructing one lane of the Sydney Harbour Bridge as part of a climate protest.

On Sunday morning, the entire Bridge and its surrounds, including the Cahill Expressway and the water beneath it, was blocked off for several hours.

The difference? Ryan Gosling, a US movie star, was filming an action movie called .

Gosling was soon trending on Twitter, with most users pointing out what they considered an irony worthy of, I dunno, a film?

Australian taxpayers paid for that irony, and the inconvenience. The federal government reportedly gave the production company $30 million from a “location incentive” scheme, while the NSW government gave them $14.5m from the “Made in NSW” fund. In fairness, the producers would have paid a location fee to the City of Sydney, but that was not disclosed and would have been nowhere near those sums.

But bribing the film company with our money was entirely unnecessary; due to the plummeting Australian dollar, we are now the world’s film location of choice. When the Australian dollar hit US62c last October (right when I was in New York, paying $A8 for a coffee), we became very attractive. It’s this, combined with our governments’ generosity and compliance, which have turned Hollywood’s cameras in our direction.

Also ironically, if I’d wanted to stand in the street this morning, holding up a sign to protest the alienation of public space, I could have been fined $22,000 and sentenced to two years in jail. When the NSW government passed the Roads and Crimes Legislation Amendment Bill last year, it passed almost without comment, despite the fact it criminalised a fundamental Australian right – to stage a public protest.

The new law takes us straight back to 1970s-era Queensland where, in the wake of public protests about the Springboks South African rugby team, Joh Bjelke-Petersen passed Draconian anti-protest laws.

movie is a remake of a 1980s television series of the same name which starred Lee Majors () as one of a group of stunt performers who used their Hollywood knowledge to catch criminals. Majors’ character and his team hunted bad guys over five seasons from 1981 to 1986.

Did I watch ? Of course not – I was hotly debating the relative merits of Jeremy Irons v Anthony Andrews in . Here I acknowledge my innate snobbery. Would the Bridge incident be less annoying if it was a sequel to or an adaption of a Tim Winton novel? And am I still cross with Ryan Gosling for the two hours of my life that I spent watching that I’ll never get back? Yes and yes.

Although Coco was released on bail pending her appeal, it seems innately unfair that someone who is genuinely trying to alert the world to the imminent threat of climate disaster should be sentenced to jail for a minor inconvenience, while a US film company, which no doubt has a massive carbon footprint, is given the green light.

When the Roads and Crimes Legislation Amendment Bill was passed, President of the NSW Council for Civil Liberties Pauline Wright said it was shocking that a law threatening peaceful protesters with large fines had been passed in Australia in 2022: “In a liberal democracy, the government should welcome citizens expressing their views, not try to ban it. This law is an outrage, but it isn’t the end of the road – we fought for protest rights in the ’70s and won, and we’ll do the same now.”

So, the next time you become disproportionately angry with a young woman for making you late for work, remember what she stands for – the right to tell the government, in public, that you don’t agree with them.

The legal basis of the right to protest in NSW is the common law right to peaceful assembly, which can be traced back to the Magna Carta, a charter of liberty dating from 1215. In the words of Joni Mitchell, “you don’t know what you’ve got till it’s gone”.

A third of the Australian population doesn’t own a home, two thirds do, so which group do politicians want to look after? Is that why they can’t answer a very simple question about Australian house prices?

: A recent breakthrough in the creation of nuclear fusion energy is good news for climate change, but what will human civilisation do to get through the next 20 or 30 years until it becomes a reality? And will we get there?

Australia’s young voters are walking away from the Coalition. How does the Liberal party get them back, and why are young Australians turning away from party values – individual freedom, equality of opportunity and reward for effort – in the first place?