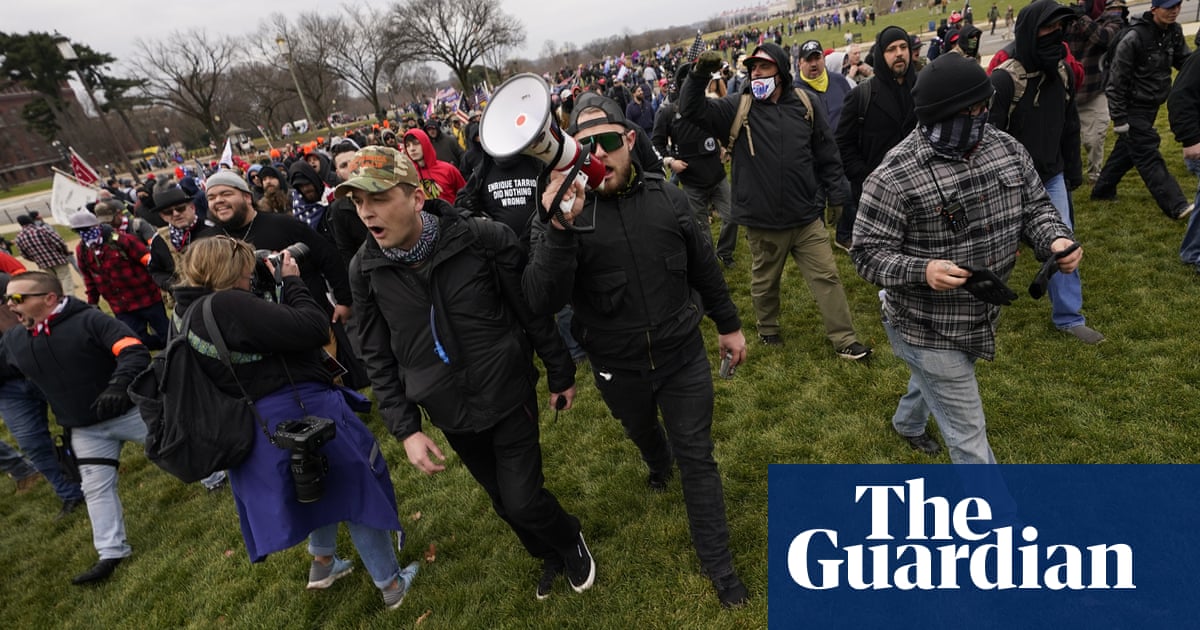 While federal prosecutors are casting the Capitol insurrection trial of five far-right Proud Boys leaders as an attempt to bring participants of an attack on US democracy to account, the members of the group are using the proceedings to ask one question even some of their opponents on the political left agree is valid.

Why have prosecutors so far only focused their energy on the supporters of Donald Trump who are accused of a coordinated invasion of the US Capitol on 6 January 2021 in an unsuccessful attempt to prevent the congressional certification of his defeat to Joe Biden in the previous year’s presidential election? Is it because they regard the former Republican president himself – who urged his supporters to “fight like hell” that deadly day – as too formidable and them as easier targets?

Attorneys for the ex-Proud Boys leader Enrique Tarrio and four of his lieutenants have sought to ingrain that question in the minds of jurors chosen after a particularly turbulent selection process which began last month and gave way to opening arguments and witness testimony beginning 12 January.

They do so even as the strategy has not proven effective in other cases where it has been suggested that it is really Trump who is culpable for the Capitol attack – not his less powerful sycophants and camp followers.

Weeks after the seditious conspiracy convictions of two leaders of the Oath Keepers – another far-right group – in connection with the Capitol attack, prosecutors in the Proud Boys case have broadly asserted that Tarrio, Zachary Rehl, Ethan Nordean, Dominic Pezzola and Joseph Biggs mustered up a “fighting force” to halt Biden from ever assuming the presidency.

Tarrio and his fellow self-described “western chauvinists” believed a Democratic Biden presidency would threaten the group’s very existence, therefore they engaged in seditious conspiracy, headed a mob that forced its way into the Capitol and tried to drive a stake through “the heart of our democracy”, prosecutor Jason McCullough contended.

Tarrio and his four co-defendants have pleaded not guilty to their alleged roles in the attack, which has been linked to nine deaths, including the suicides of law enforcement officers who protected the Capitol and were left traumatized. An attorney for Rehl, Carmen Hernandez, has insisted that her client went to the nation’s capital on 6 January not to riot but to exercise his free speech rights in protest of Trump’s loss to Biden.

Meanwhile, an attorney representing Tarrio, Sabino Jauregui, argued that his client and the others were simply on trial because “it’s too hard to blame Trump,” whose full-throated defense to any prosecution would be mounted by an “army of lawyers”.

“It’s easier to blame … the Proud Boys,” Jauregui added, saying his client and his fellow co-defendants were mere “scapegoats”.

Similar arguments have been made before by others among the nearly 950 people who have been criminally charged with having participated in the Capitol riot, including about 540 who have been convicted. Those hefty numbers notably do not include Trump, though the former president has been recommended for prosecution by a congressional committee which investigated the attack.

Just days ago, a judge ruled that a woman who helped attack the Capitol was indeed merely following orders from Trump, who fired up his supporters with false claims that he had been robbed of victory over Biden by electoral fraudsters.

But, presiding over a bench trial, the judge concluded that the woman was still responsible for her actions, convicted her of charges of violent entry and disorderly conduct in a Capitol building, and offered up a stark reminder of how flimsy the “Trump made me do it” defense is.

Nonetheless, a recent article in Salon agreed with Jauregui that “it’s ridiculous that Trump’s not in prison” over the Capitol attack.

The willingness of Jauregui and others in the Proud Boys case to so pointedly ask why low-ranking followers of Trump are having their fates tried by juries while he runs for the White House again could reflect “a growing sense of frustration in the larger public” over how the US attorney general, Merrick Garland, has handled what to do about the former president.

It could be a couple of weeks more, if not longer, before jurors decide the outcome of the charges against Tarrio, Rehl, Nordean, Pezzola and Biggs, who each face up to 20 years in prison if convicted of seditious conspiracy.

The most powerful evidence and witnesses against the accused Proud Boys almost certainly remains ahead after court wrapped up Friday, the seventh day since jurors in the case began hearing arguments and testimony.

Prosecutors have said they intend to make their case with private communications between the defendants, their statements in public, their coordinated movements at the Capitol, and their celebrations of the attack before they then tried to make it seem like they were never involved.

But the trial’s already had plenty of drama.

Beginning before Christmas, jury selection was turbulent, in part because Rehl’s lawyer Hernandez moved to dismiss nearly every prospective juror who mentioned having any knowledge whatsoever of the well-publicized Proud Boys, CNN reported.

Then, when prospective jurors claimed they had not heard of the Proud Boys, Tarrio’s lawyers Jauregui and Nayib Hassan objected, saying those people could be lying to get on the jury in hopes of convicting their client.

Prosecutors also reportedly contributed to the spectacle by blaming their failure to provide evidence binders to the defense because their office had gone through their supply of dividers and had not gotten permission to buy new ones.

Then, after being seated, jurors heard grueling recordings of radio transmissions among police officers who were trying to defend the Capitol during the attack.

“Send all you have!” one officer said as Trump supporters stormed their way into the building. Another voice later lamented: “Our situation here is dire.”

They later also heard from a British film-maker, Nick Quested, who explained that he began following the Proud Boys and recording video of them because he wanted to document worsening political divisions across the US. He ended up capturing footage of the Proud Boys among the January 6 mob, he testified, according to the left-leaning Daily Kos website.

Quested filmed as mob members screamed “treason” and “honor your oath” at police in riot gear who were desperately trying to maintain order. But the odds were overwhelmingly against the officers.

“There was maybe a dozen police officers at the first line,” Quested said on the witness stand, “and you can see there are a couple hundred people at least at this point and more coming.”