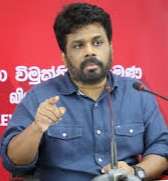 The government was making every effort to postpone the Local Government elections as it was perturbed to learn that all surveys and intelligence reports have revealed that the National People’s Power (NPP) or the compass would come on top at the LG polls, NPP leader Anura Kumara Dissanayake said today.

He told a rally in Biyagama that all surveys conducted in the country and intelligence reports have revealed that the Compass would come on top at the LG polls.

He said the surveys have revealed that the Compass would win most number of local government Bodies in Hambantota District.

He said opposition political parties being scared of predictions have started to attack the NPP continuously at daily press briefings. (Ajith Siriwardana)