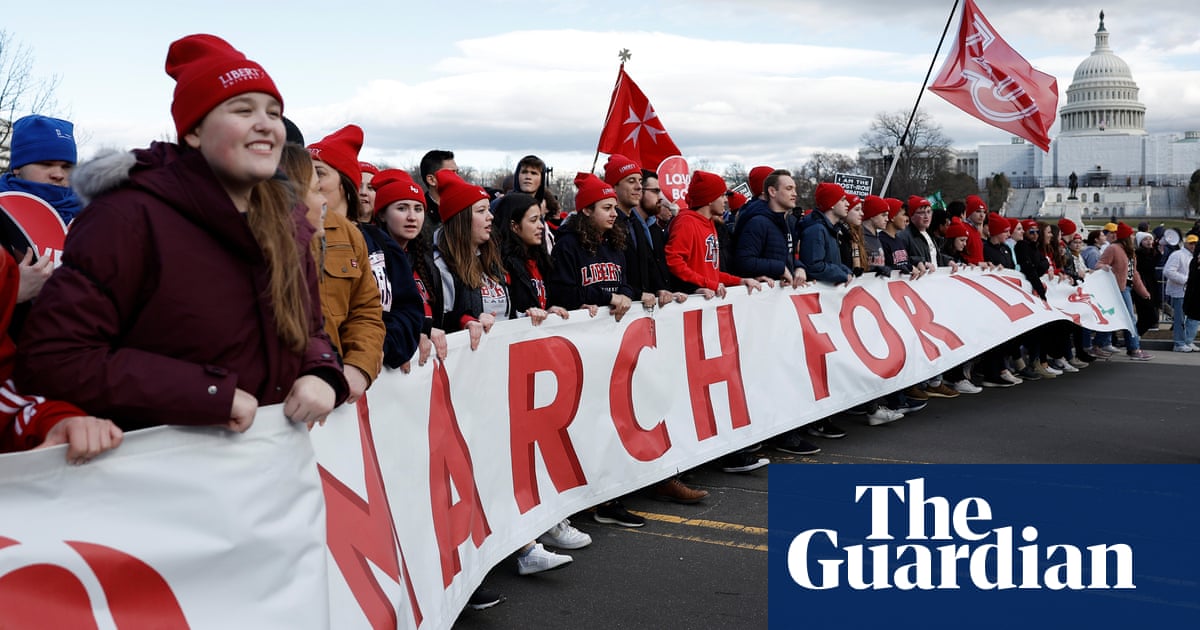 Thousands of abortion opponents descended on Washington DC for the annual March for Life on Friday, the first time since achieving its foundational objective: persuading the supreme court to overturn Roe v Wade.

Every year since the landmark 1973 decision, anti-abortion activists have come to the nation’s capital to march, plead and pray for a post-Roe America where abortion wasn’t just banned but was “unthinkable”.

A half-century later, they gathered again on the National Mall in Washington, this time to celebrate movement’s greatest victory. But they also came with a new mission to fighting the battles now playing out in their states.

Since Roe fell, movement leaders have urged Republicans to use their new House majority to pass federal restrictions on abortion, while they press for new bans and restraints at the state level. On Friday, they warned activists against complacency, with one speaker acknowledging that the decision had ushered in “challenging times of unrest and new threats to human life” as a reinvigorated reproductive rights movement pushes back.

“This is not the end of our journey,” the Mississippi attorney general, Lynn Fitch, whose office brought the supreme court case – Dobbs v Mississippi – that overturned Roe, said from the stage before the march. “It is our charge today, in this new Dobbs era, to channel that same determination and hope and prayer that has led you to these streets for 50 years.”

From the White House, Joe Biden marked the occasion with a vow to protect abortion access and a proclamation recognizing the 50th anniversary of the Roe v Wade decision, which falls on Sunday 22 January.

“Never before has the court taken away a right so fundamental to Americans,” Biden said in the statement. “In doing so, it put the health and lives of women across this nation at risk.”

He called on Congress to codify abortion rights and pledged to continue to use his limited executive authority to protect access wherever possible.

In the seven months since the supreme court ended the federal protections guaranteed by Roe, abortion access in America has become a patchwork of state-by-state policies. More than a dozen states have enacted sweeping bans on abortion, while several more aim to take similar actions when state legislatures reconvene this year. Pending legal challenges have added to the uncertainty.

Their efforts to advance new measures at the state level have been met with fierce opposition from abortion rights advocates. Initiatives have sprung up to help women seeking abortions travel to states where it remains legal or to access abortion pills. At the ballot box, abortion opponents have suffered a string of significant and unexpected defeats, including in conservative states like Kansas and Kentucky, while several Republican candidates who supported abortion bans without exceptions lost high-profile races in the 2022 midterm elections.

But at Friday’s march, the mood was undeniably joyful. Busloads of high school students, a hallmark of the event, carried signs proclaiming: “I am the post-Roe generation.” They marched alongside seasoned activists exulting in a victory that had once seemed unimaginable.

“We did it,” the Rev Lalita Smith said, recounting her “exuberance” when the Dobbs decision was handed down. “But in doing so, we brought more battles to the forefront because now every state has a right to decide what their position is going to be.”

Activists from states where abortion remains legal said they were working toward a more complicated goal that required changing not only the laws, but hearts and minds, too.

“If anything, the pro-life movement is more important than ever before because now it’s up to the states,” said Katie, a 19-year-old college student from Massachusetts who preferred not to give her last name.

The theme of this year’s gathering was “Next Steps: Marching Forward into a Post-Roe America”, a recognition that the fight to end abortion in America has moved to Congress and all 50 state legislatures. To further underscore the shift, the march charted a slightly different course. Instead of finishing at the foot of the supreme court, they concluded at a spot located between the court building and the US Capitol.

At the rally, the speakers presented a united front, committed to the march’s overarching vision to end abortion. But the post-Roe landscape has exposed fault lines in the anti-abortion movement as Republicans, elected officials and activists press ahead with varying demands, tactics and approaches.

“What is the most ambitious we can be?” Marjorie Dannenfelser, the president of Susan B Anthony Pro-Life America (SBA), a leading anti-abortion group, told reporters this week.

Dannenfelser said she would like to see Congress enact a “federal minimum standard” that would ban abortions after a certain point early in a pregnancy, though she was clear-eyed that the prospects of such action were dim as long as Democrats held the Senate and the White House.

The House speaker, Kevin McCarthy, welcomed the marchers to Washington, pledging: “You now have a Congress that is standing up for life.”

Addressing the crowd, Steve Scalise, the House majority leader, touted a pair of anti-abortion measures that passed the chamber earlier this month, among the first actions taken by the new Republican majority. “That’s what difference elections make,” he declared.

Speaking next, the Republican congressman Chris Smith of New Jersey, co-chair of the congressional pro-life caucus, said the House would soon take up a third measure that would block federal funding for abortion, known as the Hyde Amendment.

The gathering also drew opposition. On Thursday, the abortion rights group Catholics for Choice unfurled large banners from the rooftop of a Planned Parenthood in Washington, as anti-abortion activists demonstrated below. One read: “Most people of faith support legal abortion”. On Friday, abortion rights activists disrupted a prayer service organized by the March for Life.

“These extremists lied, cheated and stole seats on the supreme court in order to overturn Roe,” Mini Timmaraju, president of Naral Pro-Choice America, said in a statement. “It’s never been clearer that they are the minority: that’s why they had to cheat to win, and that’s why they were defeated handily in the midterm elections.”

Public opinion polls since the Dobbs ruling in June have repeatedly found that a majority of Americans support access to legal abortion. A Pew poll conducted in July found that nearly six in 10 Americans disagreed with the supreme court’s decision eliminating a constitutional right to abortion, while just four in 10 approved of it. Public support for abortion has largely remained unchanged, even as the partisan divide on the issue has deepened.

On Sunday reproductive rights activists will commemorate what has now become a bitter milestone, the 50th anniversary of the Roe decision, with rallies in state capitals around the country. The events are being held under the banner: “Bigger than Roe” and organizers say they hope to build on their successes in the 2022 midterms.

Vice-President Kamala Harris will mark the anniversary on Sunday with a speech in Florida, where she will rally reproductive rights supporters to fight state-level efforts to ban abortion while calling on Congress to enact federal protections.

In Florida, Democrats are bracing for new attempts to restrict abortion after Governor Ron DeSantis, a potential 2024 presidential candidate, signed into law a bill banning the procedure after 15 weeks of pregnancy.

Dannenfelser, the SBA president, said Florida was a model for what is possible across the country as a new generation of emboldened abortion opponents take charge.

“This year, we march with fresh resolve as a brand-new pro-life movement,” she said, adding: “We’re more expectant than ever that we will make new gains for women and children.”