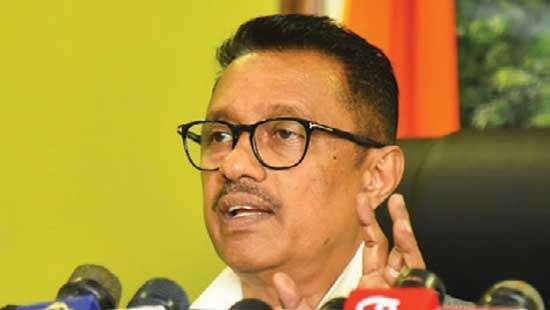 By Nishel Fernando
Public Utilities Commission of Sri Lanka (PUCSL) Chairman Janaka Ratnayake yesterday alleged that the country’s political authorities have influenced three commission members to revise the earlier unanimous decision to reject the interim and retrospective electricity tariff hike proposed by the Cabinet of Ministers. “We had a board meeting with all the commission members of the PUCSL on January 12 and we reached a collective decision not to implement any interim and retrospective electricity tariff, which is against the Electricity and PUCSL Acts.
On January 19, all three PUCSL directors were asked to come to the National Council to discuss this. However, prior to that, three commission members were called by the president to the Presidential Secretariat, without informing me,” Ratnayake told reporters in Colombo yesterday.

“These three members claimed they did not receive the Cabinet decision to increase the electricity prices on time and did not have the time to review it. They said because of that they had agreed with me,” he added.
However, Ratnayake pointed out that the three commission members had more than sufficient time to study the Cabinet decision and discuss and share their stance prior to the National Council meeting with him.

“They had seven days from January 12 to 19 and within those days, they could have informed me in writing that they had reversed their decision. Without doing that, they put me in an uncomfortable position by suddenly changing their decision in front of the National Council,” he said.

While reiterating that there are no legal provisions to implement the proposed electricity tariffs under the current laws, Ratnayake charged that the political interference into the affairs of an independent commission such as the PUCSL would set a bad precedent to future activities of any independent commission.

“In future, we will have no option but to implement whatever the Cabinet says,” he said.
He shared that he plans to file legal action against this “undemocratic” and “illegal” move in the coming week.
“If anyone can influence and implement an independent commission’s decisions like this, we are doomed. I will personally take legal actions against their actions next week. I am confident that the people will support me in this course,” he added.

According to Ratnayake, the proposed hike in power tariffs is expected to have a disproportionate impact on five million electricity consumers, who consume less than 90 units per month.

He highlighted that the Ceylon Electricity Board (CEB) disconnected power to around two million consumers over the past two months, due to non-payment of their monthly electricity bills. He warned that more consumers would be forced to move away from using electricity, if the proposed tariff hike goes into effect.

He noted that the PUCSL is already working on implementing a request submitted by the CEB to increase power tariffs in a scientific and justifiable manner, with minimum impact to the low-income-earning electricity consumers.