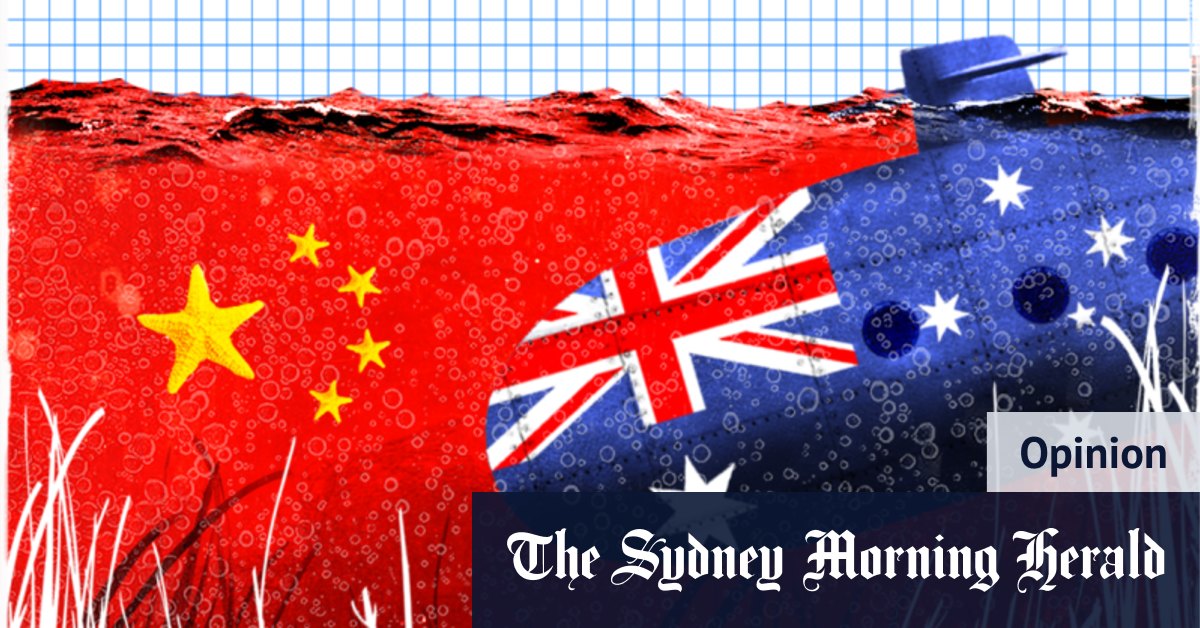 The decision for Australia to acquire nuclear-powered submarines has taken on a life of its own, divorced from disciplined considerations such as cost, effectiveness, and alternatives. At best, the decision is ill-considered. At worst, it’s Treasury-busting lunacy.

Former head of the Australian Strategic Policy Institute Peter Jennings has claimed that Australia’s purchase of the subs – eight in total at an estimated cost of an additional $20 billion per year, out to about 2050 – is necessary to “deter” China. That’s a big call in a number of ways.

We have seen Russia’s logistical challenges in conducting a land war just across its border, logistical failures have been a key reason for Russia’s military underachievement. The challenge for China in attacking Australia would dwarf anything Russia has experienced in Ukraine.

China would clearly fail in any attempt at a meaningful maritime assault on Australia. And that outcome is within Australia’s existing military capabilities, including the conventionally powered Collins class submarines. With the acquisition of advanced missiles and drones, Australia will be even more secure.

So, what are nuclear-powered submarines supposed to deter China from doing? The answer, apparently, is to prevent China from attacking Taiwan.

But where in the universe of rational thought is Australia’s acquisition of fewer than 10 submarines over the next two or three decades meaningful in China’s equation about attacking Taiwan? By even generous estimates, the first boats are years away. The full complement of eight could be several decades away. And then what is the actual impact of the new additions to the fleet?

Operationally, you can expect that only one-third of the nuclear-powered submarines would be actively deployed at one time. That is likely to be about three submarines, somewhere closer to the turn of the mid-century than today. Is that really the defining regional capability that will keep China in check?

To think it might be is to cringe at the folly of the idea. To say it out loud is to invite ridicule.

Has Australia suddenly and mistakenly taken on the mantle of the “indispensable country”? Does Taiwan’s future hang on Australia’s purchase of a few eye-wateringly expensive submarines?

The balance of submarines that Australia’s acquisition is claimed to upend so dramatically as to “deter” China includes: China, up to 79 submarines; the US, 68 submarines; Japan, about 20 (and growing); and South Korea, about 20. And that does not include Taiwan’s submarines, or those of the self-proclaimed Indo-Pacific power, the UK. That is well over 100 for Australia’s friends, and they are generally of better quality than the Chinese subs.

Moreover, the US and Japan are taking significant and meaningful steps to increase their capacity to defend Taiwan. Foremost among them is the restructuring of US Marines to counter a Chinese maritime threat, and deploying to islands close to Taiwan.

And Japan, long constrained by its non-aggression constitution, will double its defence spending over the next five years. That is a massive increase for a country that already has one of the largest and best equipped maritime forces in the world.

If this brief review of some of the characteristics of the military balance affecting China’s calculations about attacking Taiwan indicates that Australia’s purchase of nuclear-powered submarines is insignificant, it is because that is precisely what it is. Militarily meaningless. Now and into the future.

It is Australia’s version of Don Quixote jousting with windmill sails.

But this folly would come at a ridiculous cost. Projections of $170 billion are likely well off the mark, with the potential for double that cost.

The opportunity cost foregone would include the acquisition of more meaningful defence capabilities, including smart sea mines that lie undetected in strategic approaches, only activating in times of conflict and only targeting enemy vessels; off-the-shelf conventional submarines; long-range missiles and rockets; more fighter aircraft to dominate the sea-air gap between Australia and Indonesia; aerial and maritime drones.

And with the amount saved there would be money to retire national debt, build and adequately equip and staff schools and hospitals, and rebuild Australia’s failing national transport infrastructure. Greater national security would be achieved through investing in a better Australia than in throwing vast amounts of national wealth at the chimera of security through acquiring nuclear-powered submarines.

But there is one aspect on which both proponents and opponents of the acquisition of nuclear-powered submarines agree. The purchase will deeply integrate Australia’s Defence Force with the US to the point where Australia’s participation in a conflict between the US and China would be automatic.

The only difference is that the proponents cite it as a benefit to be celebrated, while opponents rail against the derogation of one of the most important elements of Australia’s national sovereignty – the decision to commit Australia to war.

This decision – conceived in secrecy, born in controversy, and destined to become the hallmark of futility – will damage Australia for generations to come.

We may not be at war, but Australia has some tough lessons to learn from Ukraine about what we need to prioritise and prepare in case we do go to war –

There’s a new head of the US Studies Centre in Sydney, and this Republican has a few things he wants Australians to know about the reality of their relationship with the US –

Recent headlines suggest that far-right populism is on the decline, but that would be short-sighted and dangerous to conclude. The long-term trend line is becoming clearer – and turning a sharp right –