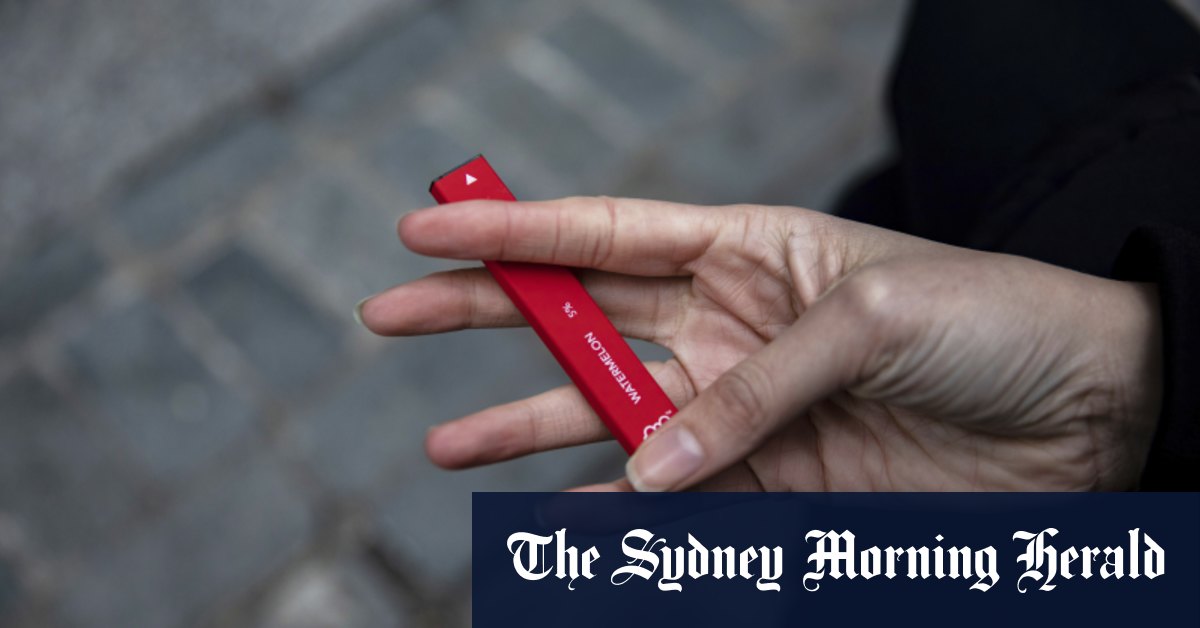 Health Minister Mark Butler knows what it’s like to fight Big Tobacco. As a junior minister to Nicola Roxon in 2011, he had a front-row seat when she as health minister took on the multinationals to introduce plain packaging.

Butler remembers the fight as a “legal and rhetorical onslaught” from an industry with deep pockets and powerful friends. “Within hours of announcing our policy, two tobacco companies declared they would challenge the decision in the High Court,” he says.

More than a decade later, he wants to take on the sector again. The new Labor government hopes to put its own stamp on Australia’s tobacco control legacy with reforms that include streamlined standards for cigarette packages and individual warning labels on each product.

But Butler’s biggest battle won’t be against cigarettes: the latest Australian Bureau of Statistics figures show the adult daily smoking rate declined to 10.1 per cent in December, just shy of the government’s target of 10 per cent by 2025.

This time around, it’s the runaway vaping market that appeals to the tobacco industry and has the health sector most concerned.

“We know our renewed tobacco and vaping reforms will have [their] opponents but we are up for the challenge,” Butler says.

He has asked the Therapeutic Goods Administration to probe whether the government should tighten border controls, create a regulated source of products and strengthen standards around e-cigarettes, also known as vapes.

Regulations introduced by former health minister Greg Hunt in late 2021 established Australia’s regulatory framework for vapes: they were only to be available as a tool to stop smoking, with a prescription from a GP, and under-the-counter sales were prohibited.

But a black market has flourished. Ask at many corner stores and you’ll be presented with a list of e-cigarettes from Chinese brands, offering single-use devices costing between $20 and $40 in flavours ranging from cola to a hybrid of pomegranate and cherry.

Talk to families, and stories abound of teenagers hooked on nicotine, or teachers trying to stamp out vaping in school toilets. NSW Health last year reported the number of 16-to-24-year-olds who said they vaped jumped from 4.5 per cent in 2020 to 11 per cent in 2021. Figures from Roy Morgan put the number of regular Australian users at 1.2 million.

With thousands of vapes swapping hands in Australia every day, the fight over both regulations and the public health narrative has escalated.

In submissions to the TGA’s consultation, which closed this week, the health sector warned Australia was sleepwalking into a public health disaster while vaping advocates said the devices helped people quit smoking and were being unfairly demonised. Retailers pushed to sell vapes from behind the counter so both they and the government could cash in.

Tobacco companies, which produce their own vaping products, also stand to gain from an expansion into the Australian consumer market, which has been otherwise dominated by illegal imports from China.

British American Tobacco launched the Responsible Vaping Australia movement shortly before Butler announced his crackdown in November, with the support of tobacconists and retailers including the Australian Lottery and Newsagents Association.

A BAT spokesman did not specifically answer questions about whether it would fight the government’s cigarette reforms or if it was seeking a greater foothold in the Australian vaping market, but said the movement’s purpose was “to support adult consumers, responsible retailers and industry associations who promote the sensible regulation of vaping products”.

“Responsible Vaping Australia is advocating to end the black-market trade of nicotine vaping products and to ensure Australian adult consumers are able to purchase products in a responsible and regulated way,” he said.

BAT and fellow multinational tobacco company Philip Morris did not make submissions to the TGA, their spokespeople said, but Imperial Brands did. A spokesman said Imperial encouraged the government to develop balanced regulation that supported tobacco harm reduction and acknowledged vapes had a reduced risk.

“The current regulatory framework … has contributed to the significant and growing illicit vape market,” he said. “It is our belief that adult smokers are unlikely to transition to potentially less harmful products if they perceive them as more expensive, less appealing or more difficult to buy and use.”

The Australian Association of Convenience Stores, which counts the three tobacco companies among its 100 members, also called for vapes to be regulated behind the counter like cigarettes, as did MGA Independent Retailers.

The convenience store group’s head, Theo Foukkare, who is a former BAT executive, has been seeking to overturn the government’s prescription vaping model since he became chief executive in January 2021. The same year, the lobby group also hired former Philip Morris executive Ben Meredith as its full-time strategy and policy adviser.

Market research conducted for the industry group by Roy Morgan estimated 6.1 per cent of Australia’s population vaped each month, with 88 per cent of products purchased through the black market.

The lobby’s argument is that enforcement has failed and illicit trade can only be reined in with a consumer model that includes regulations around retail sales, product standards and age verification. “Our concern is that the TGA is going to double down on a model they’ve already said has failed. If they do that, we’ll still be having this conversation in 18 months,” Foukkare told this masthead.

But the pro-vaping campaign was labelled a cynical attempt to hook a new generation on nicotine by the country’s GPs.

“Big Nicotine has taken advantage of a lower evidence base to create an impression of a safe alternative to cigarettes and built a customer base of new users including young people.”

“Vaping opponents like to frame vaping as a Big Tobacco conspiracy. It is not. Big Tobacco entered the market in 2012 and has been trying to catch up ever since and only controls 20 per cent of the global vaping market,” he said.

“Tobacco companies are transitioning from combustible products to safer alternatives such as vaping, which is a good thing.”

Mendelsohn’s submission to the TGA warned against “doubling down” on the current model, arguing countries that had embraced vaping had reported declines in their smoking rates.

But across the Tasman, where New Zealand adopted a consumer model, it’s not been so straightforward.

“I certainly don’t regard the New Zealand approach as a success story,” said Janet Hoek, a professor of public health at the University of Otago in Wellington. “Vaping prevalence among young people is now much higher than smoking has been for several years. We clearly don’t have the balance right.”

The latest NZ Health survey found daily vaping rates among 18-to-24-year-olds had risen to 23 per cent, prompting the government to look at tightening regulations.

“It’s important Australia learns from the mistakes we’ve made because it’s difficult to wind things back. I think our prime mistake was treating vapes as a consumer product, widely selling them, and allowing them to be sold by people who don’t have specialist knowledge,” Hoek said.

Australia’s new political environment is not on the industry’s side. While Hunt was staunchly opposed to a consumer model, he faced resistance from Coalition colleagues including Hollie Hughes and Matt Canavan, who openly pushed for one.

The 47th parliament elected last May has a fresh Labor government already talking tough on tobacco control, as well as crossbenchers including the Greens and teal independent Dr Sophie Scamps poised to welcome tighter regulations.

Long-time tobacco control advocate, emeritus professor Simon Chapman, said there was no longer anyone putting their hand up politically to fight for the industry’s desired consumer model.

“The line the convenience store people are running is a desperate line – they’re about to be thrown off a cliff. They’re terrified, as they were with plain packaging, of a model being established that will shut them out,” he said.

“BAT and Philip Morris maintain public affairs offices here, and have personnel to ensure price competition happens and stock gets to retail outlets. But they are just politically neutered.”

Richard Lee, the chief executive of Liber Pharmaceuticals, which provides the main vaping product prescribed by Australian doctors, said the medical access framework should be applauded.

“Australia was the first country in the world brave enough to say that because nicotine is addictive, you need supervision to ensure limited access to vaping products and that users are taught to use the technology responsibly,” he said.

“The framework is failing because of the illicit market. Anything the government needs to do to stop the illicit market, we strongly support. Because it’s done something different, it will be globally relevant how the Australian framework succeeds.”

Butler may have an easier time prosecuting his agenda than Roxon, who faced strong opposition from the Coalition as well as industry. But if he proceeds with tighter regulations, removing the millions of illegal products hidden behind Australian counters – and stopping their entry in the first place – will be Butler’s true test.

“It’s a big task,” said Anita Dessaix, the chair of the Cancer Council’s public health committee. “Governments can’t educate their way out of this. This is squarely a problem that needs to be dealt with through policy.”

She said a “ping pong” match between state and federal governments over responsibility for enforcement had landed Australia in a near-stalemate, and more co-operation was needed.Where NSW Health seized 6500 illegal vaping products in the first quarter of the 2020 financial year, by 2022 that had grown to 53,000.

“The problem is growing exponentially. All governments agree more needs to be done but no-one [has taken] that first important step of doing more,” she said. “But it absolutely can happen. Where there’s a will by governments to deal with this properly, it can be dealt with.”