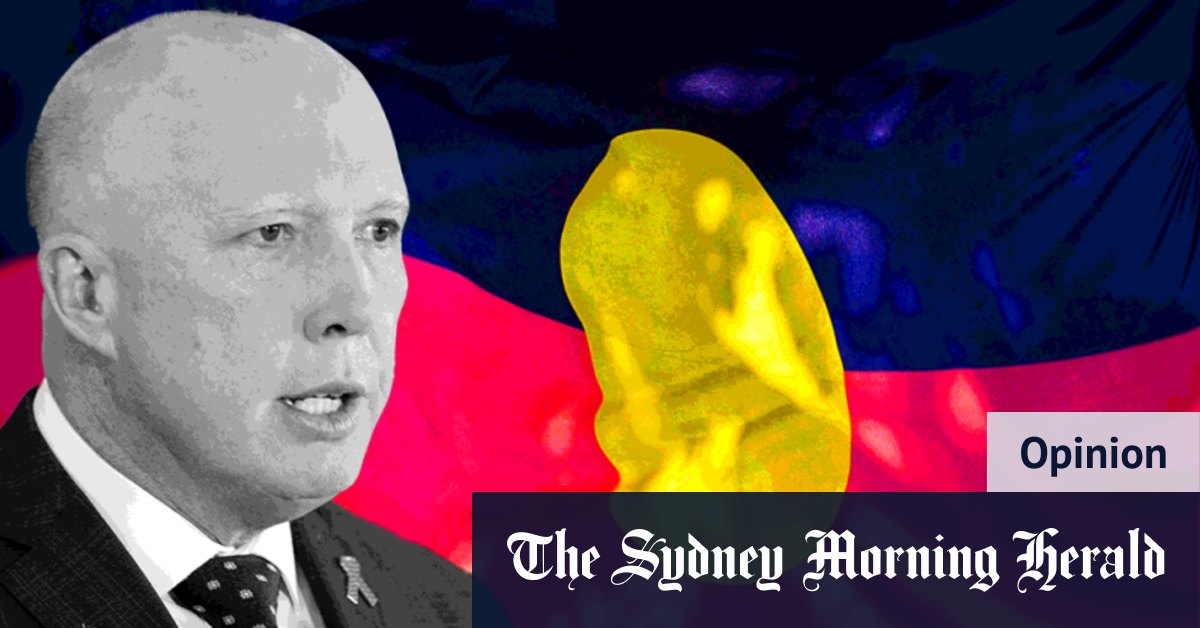 In recent comments on the proposed constitutional recognition of Indigenous Australians through the Voice, Opposition Leader Peter Dutton and others are deploying negative, wrecking ball tactics of the sort rejected so emphatically by voters at the last federal election.

Australians have had enough of contrived political game-playing for self-serving, personal advantage. They don’t expect a lot from their politicians, but at the last election they said very clearly that their elected representatives should assume responsibility for the things that matter, that they should treat people with respect and that they should model personal integrity.

Observing this latest instance of disingenuous political opportunism, the teals must be gobsmacked.

Dutton has accused the government of treating people “like mugs” for not providing “detail” on the Voice. This ostensibly “detailist” argument won’t strike all Australians as unreasonable. But that’s how doublespeak works. And as an example of doublespeak, this is about as crass as it gets.

Imagine for a moment that you were participating in one of the constitutional conventions of the 1890s, pondering the merits of including in the Constitution a clause (section 51 of the Australian Constitution) that would give the parliament the power “to make laws for the peace, order and good government of the Commonwealth” with respect to things like trade, taxation, quarantine, statistics, banking, immigration, marriage and old-age pensions. How much patience would you have for a protest that such a clause should not be considered unless and until everybody was fully informed of everything that the parliament might do with those powers?

The Australian people are to decide this year if they wish to recognise Indigenous people in the Australian Constitution by putting in place a new and enduring partnership through the Voice. The partnership is to be constructed on two notions, neither of which should be controversial. First, that Indigenous Australians should have a Voice to parliament on matters affecting them. And second, that, as an act of reconciliation, that Voice should be considered special.

Mr Dutton, along with every other one of our elected representatives will get the opportunity to haggle over every bit of detail when the Voice legislation comes before the parliament, following a successful referendum.

And that opportunity for immersion in the detail is not a one-off. Detailists like Dutton will have an ongoing opportunity to use the parliament to evolve the details of the partnership through legislation, well after the first best attempt. Indeed, the parliament could continue to perfect the partnership through making legislative changes as required over the next 65,000 years, if we have that sort of timescale still before us, simply by doing the job we pay it to do.

The detail that some are demanding is irrelevant to the fundamental decision to be made about constitutional recognition of Indigenous Australians through the Voice.

But what of the concern that the Voice will not achieve the practical changes needed to ensure that Indigenous people overcome entrenched disadvantage?

No politician can know that giving Indigenous people a say in the decisions affecting them through the Voice work to improve practical outcomes. They can’t know it because they haven’t tried it. They have tried just about everything else, though, captivated by the eloquence of their own voices, rather than listening to the voices that really matter.

Generations of Australian politicians have had all the power and apparatus of the Australian state at their disposal, yet have merely borne witness to their own failure to prevent the ever-worsening tragedies of Indigenous child protection, incarceration, and suicide; and shamefully persistent gaps in Indigenous life expectancy, employment, educational attainment, poverty, drug and alcohol abuse, mental and physical health outcomes.

If the detailists won’t support constitutional recognition and a partnership with Indigenous Australians through the Voice, it is not because they have the answers. A terrible history of policy dysfunction puts the lie to any such notion.

Those opposing the Voice risk a mistake as shameful as refusing Indigenous Australians an apology. Ultimately, Australians saw through the crass political games being played then. They came to see who was treating them “like mugs”. And they made their displeasure clear at the ballot box, as they will on this occasion.

Ken Henry is a former treasury secretary. He is also a former director of the Cape York Partnership and Reconciliation Australia.

Australians will vote this year on whether to support an Indigenous Voice to parliament – but there are three questions that need to be answered. Fast –

Australians are not “voting blind” in the Voice referendum. They will be voting on the basic principle – giving Indigenous Australians a collective Voice to seek to influence and inform the parliament and government by making representations to them –

Australia has a global reputation for being able to read the future when it comes to political shifts. What shift are we signalling to the world now? Is it a move to a more inclusive democracy, with a focus on meaningful issues rather than phoney wars? –