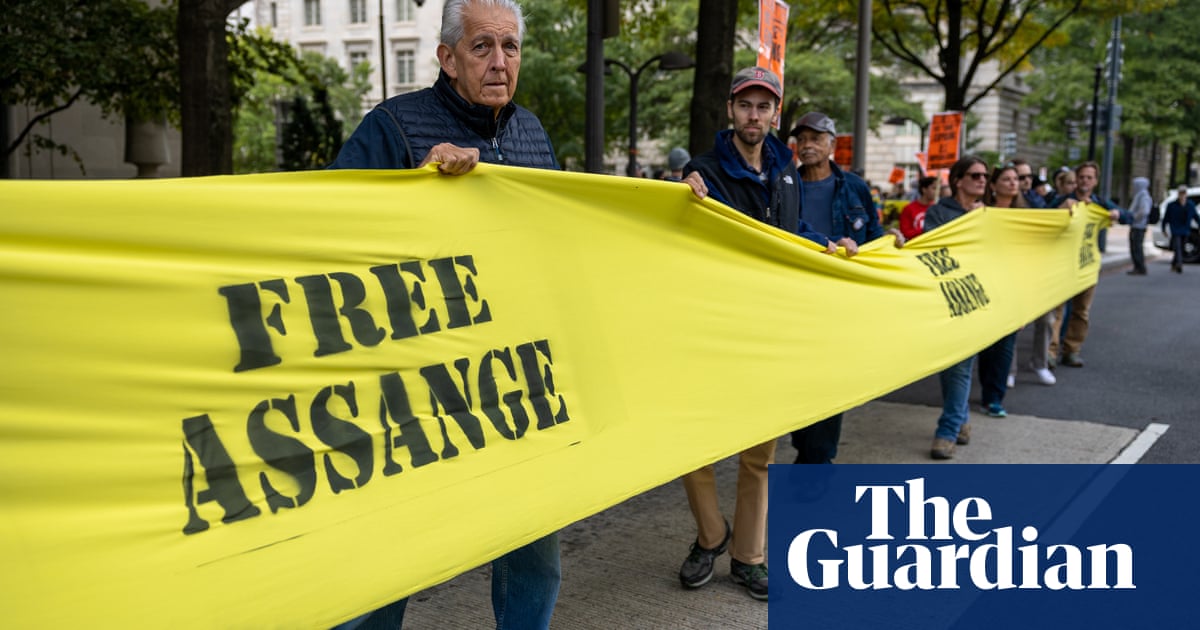 Joe Biden has been accused of hypocrisy for demanding the release of journalists detained around the world while the US president continues seeking the extradition of the WikiLeaks founder Julian Assange from Britain to face American espionage charges.

The campaign to pressure the Biden administration to drop the charges moved to Washington DC on Friday with a hearing of the Belmarsh Tribunal, an ad hoc gathering of legal experts and supporters named after the London prison where Assange is being detained.

The hearing was held in the same room where Assange in 2010 exposed the “collateral murder” video showing US aircrew gunning down Iraqi civilians, the first of hundreds of thousands of leaked secret military documents and diplomatic cables published in major newspapers around the world. The revelations about America’s wars in Iraq and Afghanistan, including alleged war crimes, and the frank assessments of US diplomats about their host governments, caused severe embarrassment in Washington.

The tribunal heard that the charges against Assange were an “ongoing attack on press freedom” because the WikiLeaks founder was not a spy but a journalist and publisher protected by free speech laws.

The tribunal co-chairperson Srecko Horvat – a founder of the Democracy in Europe Movement 2025 whose father was a political prisoner in the former Yugoslavia – quoted Biden from the 2020 presidential campaign calling for the release of imprisoned journalists across the world by quoting late president Thomas Jefferson’s dictum that “our liberty depends on the freedom of the press, and that cannot be limited without being lost”.

“President Biden is normally advocating freedom of press, but at the same time continuing the persecution of Julian Assange,” Horvat said.

Horvat warned that continuing the prosecution could serve as a bad example to other governments.

“This is an attack on press freedom globally – that’s because the United States is advancing what I think is really the extraordinary claim that it can impose its criminal secrecy laws on a foreign publisher who was publishing outside the United States,” he said.

Assange faces 18 charges over WikiLeaks’ publication of classified documents, largely the result of a leak by the former US army intelligence analyst Chelsea Manning. Manning was sentenced to 35 years in prison but released after President Barack Obama commuted her sentence in 2017. Manning has testified that she acted on her own initiative in sending the documents to WikiLeaks and not at the urging of Assange.

The tribunal heard that the accuracy of the information published by WikiLeaks, including evidence of war crimes and human rights abuses, was not in question.

Assange is a polarising figure who has fallen out with many of the news organisations with whom he has worked, including the Guardian and New York Times. He lost some support when he broke his bail conditions in 2012 and sought refuge in the Ecuadorian embassy in London to avoid extradition to Sweden to face questioning over sexual assault allegations.

The US justice department brought charges against Assange in 2019 when he was expelled by the Ecuadorians from their embassy.

Assange fought a lengthy legal battle in the British courts against extradition to the US after his arrest, but lost. Last year, the then-home secretary, Priti Patel, approved the extradition request. Assange has appealed, claiming that he is “being prosecuted and punished for his political opinions”.

Assange’s father, John Shipton, condemned his son’s “ceaseless malicious abuse”, including the conditions in which he is held in Britain. He said the UK’s handling of the case was “an embarrassment” that damaged the country’s claim to stand for free speech and the rule of law.

Lawyer Jeffrey Sterling, a former CIA employee who was imprisoned under the Espionage Act for revealing defence secrets to the journalist James Risen, told the Belmarsh Tribunal that Assange has little chance of a fair trial in the US.

He said: “It is virtually impossible to defend against the Espionage Act. Truth is no defence. In fact, any defence related to truth will be prohibited. In addition, he won’t have access to any of the so-called evidence used against him.

“The Espionage Act has not been used to fight espionage. It’s being used against whistleblowers and Julian Assange to keep the public ignorant of [the government’s] wrongdoings and illegalities in order to maintain its hold on authority, all in the name of national security.”

“If Julian Assange ends up in a maximum security prison in the United States for the rest of his life, every other journalist around the world will think, ‘Should I really report this information I’ve been given? Should I really speak out about this denial of human rights or miscarriage of justice in any country?’” he said.