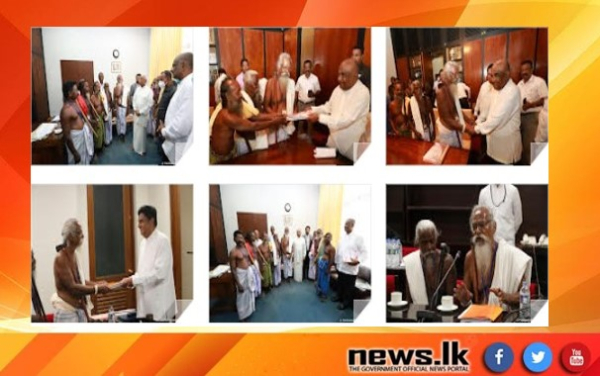 Meeting with the indigenous groups living in Uva, East North Central and other provinces, a series of policies and demands prepared by the Centre for Policy Alternatives (CPA) regarding various problems faced by them were handed over to the Speaker, the Prime Minister and the Leader of the Opposition.

They also said that it is a problem that no census has been conducted regarding data of the indigenous people in Sri Lanka after 1963. indigenous leaders also informed that injustice has been
done by classifying the data of the aboriginal community under the category of ”Other”; in the censuses conducted after 1963.
Thus, it was discussed that the rights of the aboriginal people in some countries of the world have been recognized and the necessary legal provisions have been provided for it through a separate Act. Accordingly, it was discussed that the aboriginal people in this country should have the same recognition and rights.

The issue pertaining to microfinance loans given to indigenous women was also discussed here. At this occasion, the Speaker Hon. Mahinda Yapa Abeywardana pointed out that he will discuss the related issues with the Prime Minister and take every step to protect the rights of the aboriginal people.

The Prime Minister also said that he will provide full support to secure the rights of the aboriginal people. The Prime Minister Hon. Dinesh Gunawardena instructed the State Minister Hon. Ashoka Priyantha to find suitable measures to solve the problems faced by the aboriginal people locally. The Prime Minister also said that he will look into the measures that can be taken through the committees of the Parliament. The Chief Government Whip, Minister Hon. Prasanna Ranatunga said that special attention will be paid to what can be done through the Parliament. Hon. Sajith Premadasa, the leader of the opposition, also emphasized that these demands of the aboriginal people are very reasonable and he will extend his full support for this. Officialsrepresenting the Centre for Policy Alternatives including Mr. Lionel Guruge, Mr. Lalinda Wickramaratne, Mr. Lahiru Kitalagama were present at this occasion.