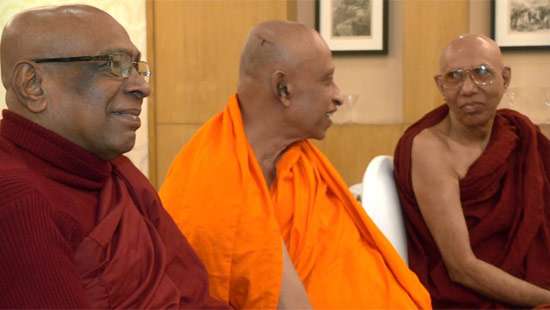 A delegation of high-ranking Sri Lankan Buddhist monks, who were on a pilgrimage to the Bodh Gaya have recalled the historical Buddhist connections between India and Sri Lanka which have a legacy of intellectual, cultural, religious and linguistic interaction and the relationship between the two countries for more than 2500 years old.

The delegation of high-ranking Sri Lankan Buddhist monks, on a five-day spiritual visit to Bodh Gaya recently to attend discourses of the holy city.

Buddhism is one of the strongest pillars connecting the two nations and civilizations from the time when the Great Indian Emperor Ashoka sent his children Arhat Mahinda and Theri Sangamitta to spread the teachings of Lord Buddha at the request of King Devanampiya Tissa of Sri Lanka.

Underlining the deep people-to-people connect and shared Buddhist heritage between India and Sri Lanka, the venerated relics of Lord Buddha from Kapilawasthu discovered in 1970 in India have been exhibited two times in Sri Lanka. The first time was in 1978 when they were brought to Sri Lanka and drew crowds of nearly 10 million people. In 2012, the relics once again travelled from India to Sri Lanka to commemorate the 2600th anniversary of the Enlightenment of the Buddha.

Prime Minister Shri Narendra Modi during the Virtual Bilateral Summit held between India and Sri Lanka on 26 September, 2020, announced a USD 15 million grant assistance for protection and promotion of Buddhist ties between India and Sri Lanka. This is a first of its kind grant announcement by India which may be utilised for construction/renovation of Buddhist monasteries, education of young monks, strengthening engagement of Buddhist scholars and clergy, development of Buddhist heritage museums, cultural exchanges, archaeological cooperation, and reciprocal exposition of The Buddha’s relics.

In July, 2020, the Government of India declared the Kushinagar Airport in India, the place of Lord Buddha's Mahaparinibbana, as an international airport, to allow Buddhist pilgrims from around the world to visit the revered site associated with Lord Buddha with ease.

In May-June, 2021, a series of special prayers and ceremonies were held by people of different faiths across Sri Lanka for the well-being of people of India, in the wake of COVID-19 pandemic.

The Swami Vivekananda Cultural Centre (SVCC), the cultural arm of the High Commission of India, Colombo, has been playing a key role in strengthening these ties and promoting people-to-people contacts between India and Sri Lanka since its inception in 1998.

“We know that Emperor Ashoka’s son Arahat Mahinda introduced Buddhism to Sri Lanka. From that day up to now, Buddhism is the main religion in Sri Lanka,” a member of the delegation, Venerable Muruddeniya Dhammarathana Thero of the Asgiri Chapter said.

“Not only Buddhism, we got a lot of things through him, especially our religion and also our education and other traditions. We got a lot from Buddhism so we greatly appreciate the situation, and we always respect India as a Buddhist motherland and also as our elder brother of Sri Lanka because India always helped us,” he added.

“Even at present we have economic troubles. India has helped immensely,” he said.

The members of the Buddhist Sangha representing eminent monasteries in Sri Lanka attended the three-day holy teaching of His Holiness Dalai Lama in Bodh Gaya.

The Most Venerable Makulewe Wimala Mahanayake Thero, Chief Prelate of Sri Lanka Ramanna Maha Nikaya recalled how Lord Buddha visited Sri Lanka and the spread of Buddhism during the reign of Emperor Ashoka.

“The Buddhist philosophy was born in India and Buddha lived in India. So, according to history, the Buddha visited the only foreign land and that is Sri Lanka. He visited Sri Lanka three times. During emperor Ashoka’s time, he sent Buddhist missionaries like his own son and daughter to Sri Lanka and they established Buddhist rule and culture. Since then we have been sharing the same culture and tradition. Now, we have become a Buddhist country because of that,” he said.

“In our chronicles, we have Mahavamsa chronicles. We protect Buddhism in its pristine purity which means sasna, dhamma, rituals and everything. That is our heritage. I think it is from Indian ancestors and otherwise, our Sinhala Language i.e., Palli is also very close to the Sanskrit language. Actually, we respect the two languages. Our teachers told us that our mother tongue is both Palli and Sanskrit,” he said.

“In our school textbooks, Buddhist places are introduced for the children. Not only that, we have Sunday school, a Dhamma school, where we also teach kids the background of Buddhism, where the Buddha was born, and the source and situation at that time, and where the holy places are,” he said.

A large number of monks from Sri Lanka and other countries visit India to learn about Buddhism and its teachings.

Most Venerable Waskaduwe Mahindawansa Mahanayake Thero, Mahanayake Thero, Sri Sambuddha Sasanodaya Sangha Sabha said, “Now, at the moment, 18 Buddhist young monks from Sri Lanka are in India. They will be here for a month, travelling all across India”.

“India is the birthplace of Buddhism. So, these young monks are travelling across India which will create many connections in the future”, he added.

Such visits prove to be a turning point in Buddhist relations, not only with Sri Lanka and India but with other neighbouring countries.