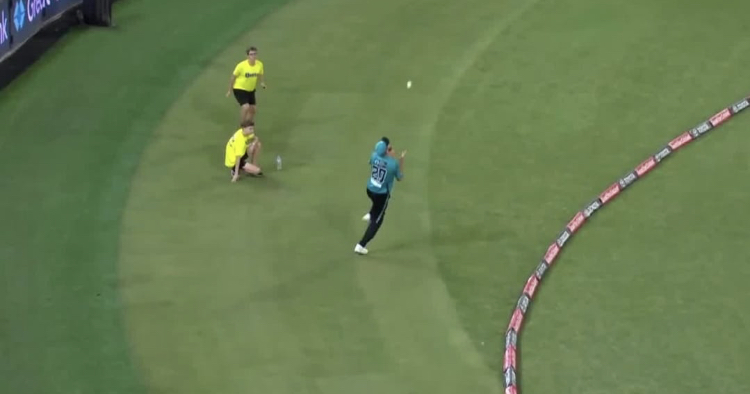 Cricket can be a complicated sport at times, even for those well-versed in the game. And especially so given the laws and playing conditions are regularly updated and some rules may be in play for one format but not for others.

One rule that often brings on heated debate involves players taking a catch after juggling it over the boundary line.

While most catches take place inside the rope, there are the odd occasions where players have to go outside the field of play in order to help them complete the catch.

Fielders are allowed to go even further if they want to hold a boundary catch.

Therefore – and this is the really important bit for those who argue you could simply set fielders behind the boundary – as long as the fielder’s first touch of the ball is within the rope, they are free to complete the grab however they like, so long as they aren’t grounded with the ball over the boundary.

Prior to October 2013, the law had stated that the fielder needed to be grounded in bounds before securing the catch.

Glenn Maxwell was watching on and voiced his confusion on Twitter.

But the umpires made the right call and Lalor’s catch stood.

Coincidently, later that year Maxwell himself was a beneficiary of the change.

The law was amended by MCC to reward athleticism in the outfield but Maxwell, after completing this stunning grab in England, said he didn’t see the point of the change.

“I don’t think it makes a whole lot of sense,” Maxwell said after the ODI.

“I think you should have to get back into the boundary.

“But while we’re taking catches on our side it doesn’t really bother me, but I know if I was a batsman I’d be pretty upset if that was the dismissal. You’ve just got to play the rules you’re given.”

“I think it makes it easier as an outfielder. You’ve got to be aware of the rope as well but it made the catch a lot easier to complete, to be able to jump from back over (the boundary) and catch it in the air.

“Obviously I didn’t really want to have to do it, but I lost a bit of balance on the boundary line so I thought I had to throw it up, and obviously with the law being like it is, jump from over the rope and back in and catch it in mid-air.”

The law was back in the spotlight to bring in 2023 when Michael Neser completed a juggling effort on the boundary to dismiss Jordan Silk at a crucial point of a high-scoring affair at the Gabba.

Again, the key parts here are that Neser first made contact with the ball while within the boundary and was never grounded over the rope while touching the ball.

Speaking on 7Cricket post-match, Neser referenced the aforementioned Renshaw catch while adding, “I didn’t know if they’d changed the rules so I’m going to give it a crack and thankfully they didn’t change the rules.”

Fox Cricket commentator and legend of the sport, Adam Gilchrist, was one of many confused as to how it could be given out in the immediate aftermath of Neser’s effort, but later admitted the umpires made the right call while also suggesting his colleague Mike Hussey was also unaware the catch was within the laws of the game. (CricketAu)