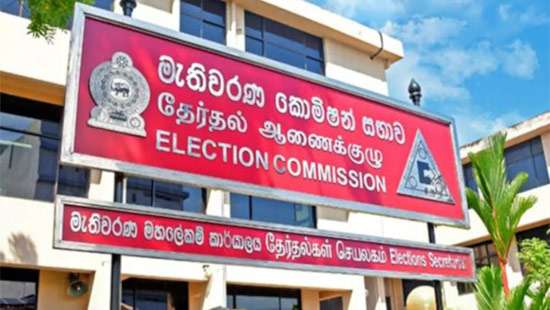 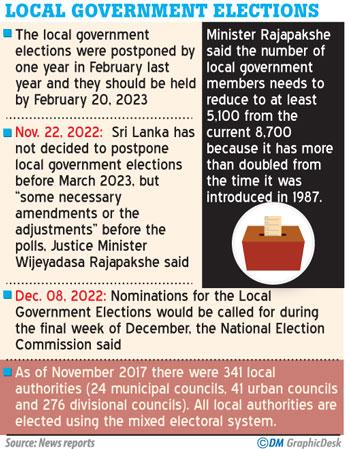 As exclusively reported by Daily Mirror on last Tuesday (13), the Elections Commission (EC) will issue the gazette notification calling nominations for the Local Government (LG) polls after Christmas and or before the 30th December, Chairman of the EC,S.G.Punchihewa reiterated yesterday.

The nominations will be accepted by district returning officers from registered political parties and independent groups on the 14th day from the announcement of nominations until 12.00 noon the following day.

The section 26 of the Local Authorities Elections Ordinance says that the Local government polls have to be held between five weeks to seven weeks after the closure of tendering nominations. The nominations will be accepted by district returning officers from registered political parties and independent groups on the 14th day of notice of nominations until 12.00 noon the following day.

Thus, the election to elect 8,301 members for 24 Municipal Councils, 41 Urban Councils and 275 Pradeshiya Sabhas except the Elpitiya Pradeshiya Sabha can be expected in late February, 2023.

Punchihewa told Daily Mirror last morning that the EC would meet tomorrow (20) to take a final decision on the date to issue the gazette.

“It will definitely be between 26th and 30th December. The Elections Commission expects to announce the exact date of releasing the gazette to the media after we decided the date to issue the gazette notification calling nominations for local government elections,” Punchihewa stressed.

Commenting on speculations circulating in the mainstream and social media to the effect that requests to the government and attempts have been made by various politicians and political parties to postpone the LG polls, Punchihewa emphasized that only the Supreme Court and the Legislature have the constitutional authority to postpone the election.

The tenure of 340 LG bodies has already been extended by one year up to March 20th next year by the government. The government must hold LG polls and constitute 340 LG bodies by March 19, 2023. No one can extend the term of office of LG bodies under the law as election can be extended only once.