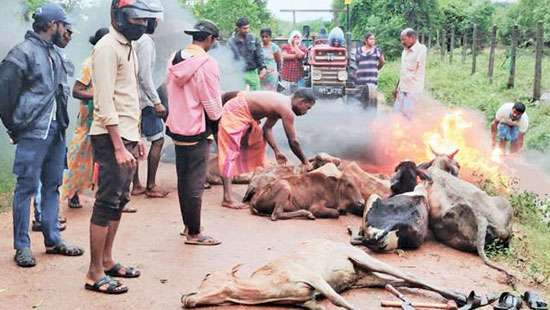 The recent large number of cows, buffaloes, and goats that died in the northern and eastern provinces was due to the shock caused by extreme cold, the Animal Production and Health Department report said.

The information revealed following a report relating to the recent animal deaths was issued by the Animal Production and Health Department, Peradeniya, following an investigation.

About 1,660 cows, buffaloes, and goats died in the northern and eastern provinces due to the bad weather conditions over the past few days. Therefore, a large number of livestock, including cattle, buffalo, and goats, also became critically ill.

Afterward, the Agriculture, Wildlife, and Forest Resources Conservation Minister Mahinda Amaraweera instructed the relevant authorities to conduct a thorough investigation and submit a report regarding these sudden animal deaths.

According to the investigation, it has been confirmed that the reason for the death of these animals was not an epidemic situation but simply due to the shock caused by extreme cold. (Chaturanga Pradeep Samarawickrama)