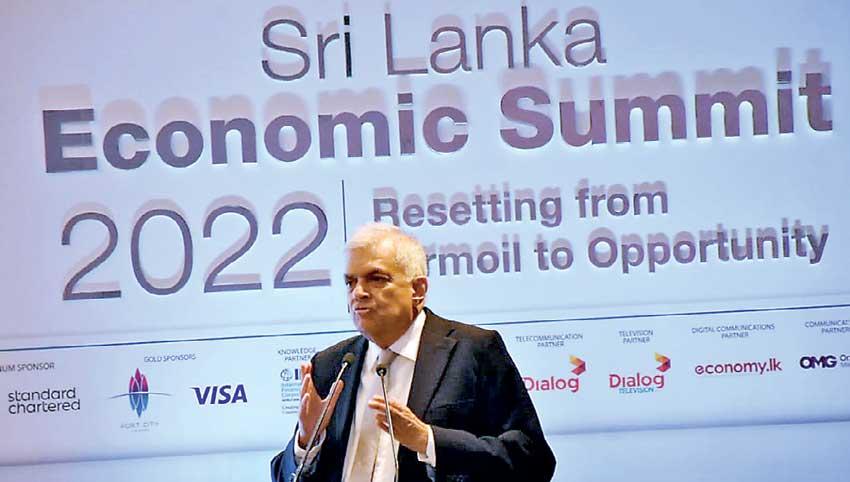 By Shabiya Ali Ahlam
Sri Lanka has no plans whatsoever for reforms going forward, President Ranil Wickremesinghe told a room full of the country’s top private sector business leaders yesterday but instead would be thinking bigger and bolder in terms of its growth agenda.

While the buzzword in recent months, particularly since the collapse of the economy, has been the need for urgent reforms, the country’s leadership affirmed there would be none going forward.

“What is the plan for reform? Frankly, I have no plan for it. What reforms when we don’t have an economy,” Wickremesinghe told the inaugural session of Sri Lanka Economic Summit 2022, themed ‘Resetting from turmoil to opportunity’.

The annual event, which was kicked off yesterday, is organise by the country’s premier business chamber, the Ceylon Chamber of Commerce.

“The government will not have plans for reform. What we want to do is to build a new economy. But is the private sector ready for it? Can you handle the pain,” Wickremesinghe asked the business leaders present in the audience, who appeared shocked for a moment.

According to him, the current economy, where the extent of its fragility is being fully felt by the people, is not worth reforming, as it is unavoidable that sooner or later the model will crumble gain.  Since the present circumstances are not in favour of the local economy, rebuilding the same structure would only result in a downfall, possibly even at a faster phase, Wickremesinghe pointed out.  He said going forward, being competitive alone would not help the crisis-hit nation. According to him, Sri Lanka needs to be “highly competitive” and only then the country can even think about competing with regional peers such as China, Japan, Korea and India.

As Sri Lanka is at the moment witnessing a flight of talent or as Wickremesinghe put it, “youth voting with their feet”, he said that this translates to the fact that both the government and private sector have not succeeded in creating an enabling environment for the local human resource pool to remain in the country.  “So, stop pointing fingers at each other. We have to make sure we go ahead. So, our programme for the future will be called ‘The Next 25 years,” said Wickremesinghe.