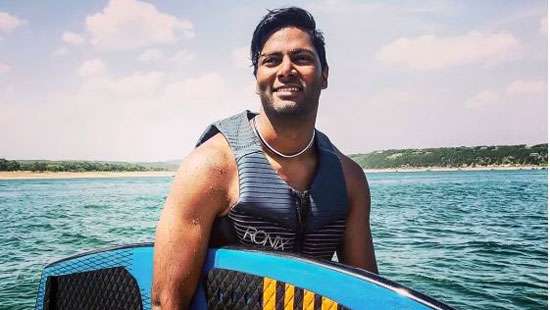 A tech entrepreneur in Texas wasn’t given ample time to drop a rifle he was carrying on his own front porch before he was fatally shot by police last month, his devastated family told NBC News.

Rajan “Raj” Moonesinghe, 33, had returned from a trip and suspected his home had been burglarized during the early-morning hours of Nov. 15. That’s when he held a rifle outside his front door and was encountered by an Austin police officer who quickly shot him while almost simultaneously ordering Moonesinghe to drop the gun, relatives said.

In an exclusive interview on Thursday, Moonesinghe’s mother, Ruth, and brother, Johann, said they were heartbroken and demanded answers from Austin police as to why their loved one was killed so quickly before being given a reasonable amount of time to drop the weapon.

“He did nothing wrong,” Johann Moonesinghe said. “He had a gun … he was defending his house and he didn’t point the gun. He was not menacing. He didn’t look like he was going to shoot anyone.”

Moonesinghe said his brother got a rifle to protect himself and there had been recent crimes in the area.

“He called his friend and he said I think something’s been moved around my house. Something strange is going on.”

Ruth Moonesinghe described her son, the co-founder of a restaurant consulting business, as an “amazing gift” to her and many others.

“I just wanted to hold him … and say, ‘I love him. Thank you for being this amazing gift that I had,''' she said. “I’m just sad. I wasn’t there because … that shouldn’t have happened to him.”

Austin police said in a statement the deadly shooting occurred about 12:30 a.m.

They said a 911 caller told a dispatcher that a man in a gray robe and dark pants was pointing a rifle down the street.

Police identified the officer who fired at Moonesinghe as Daniel Sanchez, who is now on administrative leave.

Two other officers initially responded to the call. One of those officers ordered Moonesinghe to show his hands after he was shot.

Sanchez has been with the department for two years and nine months, police said. They said two investigations into the shooting are ongoing.

Sanchez could not be immediately reached for comment Friday. A statement from lawyers with the Combined Law Enforcement Association of Texas, or CLEAT, said Sanchez followed police protocol.

“CLEAT attorneys responded to an incident on November 15th involving one of our members. We are representing the Austin Police Officer and believe it’s important to recognize that while this event is a tragedy, the officer followed his training in an effort to protect lives,” the statement said.

Evidence released by police on Thursday — including a 911 call to police, a Ring camera video from Moonesinghe’s home and body camera footage from officers — shed additional light into the deadly encounter.

He appears to say, “Yep, you want this?” Several seconds pass and then Moonesinghe says, “Are you sure?”

He then comes into view of the camera and is walking on his porch when what sounds like “drop the gun” is shouted, and nearly simultaneously multiple shots are heard on the video.

Moonesinghe then drops to the ground and shouts, “It wasn’t me.” He then yells an expletive, the video shows. “Subject is down, hands are up” is heard on the video.

Moonesinghe again appears to say, “It wasn’t me.”

According to the video, an officer then appears to shout, “Show us your hands. Do it now.”

Moonesinghe again shouts, “It wasn’t me.”

Video from Sanchez’s body camera shows the officer exiting his vehicle with what appears to be a rifle. He shouts “drop the gun” and then fires three rounds followed by two others.

In the 911 audio, a caller is heard telling the dispatcher a man was outside with a rifle and “pointing it down the street.” During the six-minute call, the caller also tells the dispatcher the man was later standing at the doorway of his home with the rifle at a “low-ready” position.

The caller added, “He almost seems to be scared of something inside of his home. … It looks like he’s pointing the rifle at the interior of his home.”

The caller then alerts the dispatcher that the man fired the rifle.

He tells the dispatcher police have arrived and then says, “He fired again.”