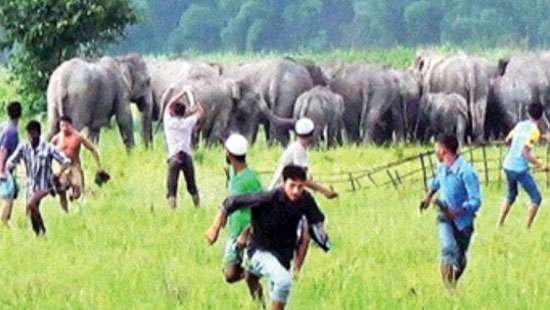 The Minister of Wildlife has given an undertaking to the Court of Appeal that 2,000 firearms will not be issued to the personnel of the Civil Defence Force (CDF) living in areas rife with Human Elephant Conflicts.

A cabinet decision had been taken in December 2019 to issue 2,000 firearms to CDF personal on the basis of protecting farmers and their crops.

President's Counsel Sanjeeva Jayawardena appearing for the petitioner-environmental organisation submitted to court that the Sri Lankan Elephant is seriously dwindling in numbers and that there could be uncontrolled culling of elephants as well as grievous maiming and injuring of wild elephants. He submitted that whilst he appreciated that there were human-elephant conflicts in certain areas, that this was due to the systematic loss of elephant habitat and that there were other solutions that could be implemented, as opposed to issuing 2000 weapons arbitrarily.

He further submitted that such course of action would be seriously detrimental to the limited elephant population of the country. He further said there would be indiscriminate weaponization in the country and no controls would be had as to whom these weapons could really end up with, given the 2000 numbers that were contemplated.

ASG Dharmawardena said no firearms will be issued in terms of the said purported Cabinet Decisions and further said that instead of firearms, that only firecrackers would be issued.

This undertaking by the respondents was recorded before Court of Appeal two-judge-bench comprising of  Justices Mohammed Laffar and S.U.B. Karaliyadde.

However, Counsel for the petitioner reserved the right to file a motion in court if this strict undertaking was violated in any way, in the future.

Through this petition, the petitioner is seeking an order directing the respondents to recall the firearms and ammunitions, if those items had been distributed to Civil Defence Force.

The Petitioner stated that it was learned from press reports that the Cabinet of Ministers have approved the issuance of 2000 firearms to be distributed to personnel of the Civil Defence Force (CDF) living in areas rife with Human Elephant Conflicts purportedly to protect themselves against elephants and other wildlife, pursuant to an impugned Cabinet Memorandum presented by the Minister of Wildlife.

The petitioner is further seeking an order in the nature of writ of prohibition restraining the Wildlife Minister and Cabinet of Ministers from approving or permitting the implementation of the concerned Cabinet Memorandum.