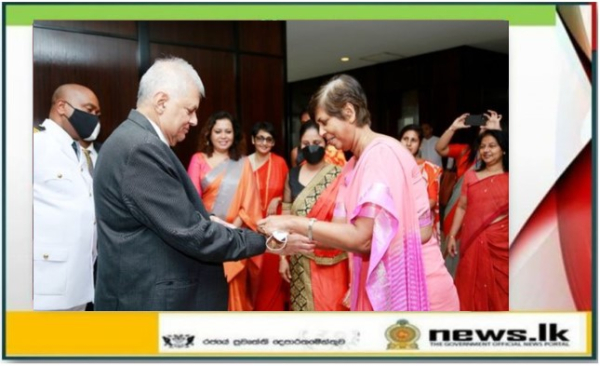 Accordingly, a wristband with the message “Let’s Unite to end Gender Based Violence” was presented to the President Hon. Ranil Wickramasinghe by the Chairperson of the Women Parliamentarians Caucus, Member of Parliament Hon. (Dr.) Sudarshanee Fernandopulle along with the other members of the Caucus. Chief of Staff and Deputy Secretary General of the Parliament Mrs. Kushani Rohanadeera was also present on the occasion. Here, the President informed that the draft bill of the Women’s Act should be completed soon and submitted to Parliament.

The publications relevant to gender equality and social inclusion available for reference by MPs, donated by National Democratic Institute (NDI) were also presented to the President at the recently established Gender and Social Inclusion Section of the Parliament Library.

At the press conference held, members of the Women Parliamentarians’ Caucus explained the, global theme of the campaign 2022, “UNITE! Activism to end violence against women and girls.” It was also emphasized that without unity GBV cannot be combatted, thus calling on governments, development partners, CSOs, youth, media and all other stakeholders to come together to fight against GBV.

To stand in solidarity with this global movement, the female parliamentarians carried out a series of advocacy measures starting from 25th November. They conducted two panel discussions on combating GBV on 28th and 29th November.

A knowledge sharing session with journalists on “Combatting Violence against Women (VAW) through Media” is scheduled to be held on December 6. There will be a discussion on combating GBV and VAW through media reporting among Sri Lankan journalists including the lobby correspondents.

All these activities are being carried out by Women Parliamentarian’s Caucus, hand in hand with the Parliament Communications Department and the Parliament Secretariat in the hope of raising awareness among Parliamentarians and the public against GBV and the necessary support was provided by the National Democratic Institute (NDI).