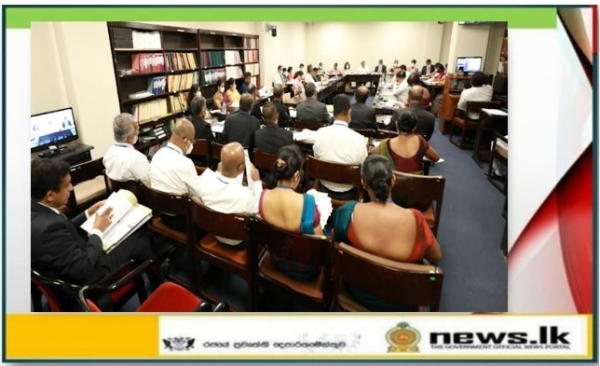 It was also pointed out by the Auditor General that this amount has been identified as the total arrears of tax to be collected under both the RAMIS and Legacy systems. Furthermore, there was a long discussion about the failure to collect 201 billion rupees which is available as revenue from this tax arrears.

Accordingly, the present officials pointed out that recovery of this money in instalment basis has already started.

The chairman to the committee, Hon. Kabir Hashim, Member of Parliament recommended that a report be given to COPA containing information on how to collect the tax arrears identified as chargeable income in parts or with dates.

This was disclosed when the Inland Revenue Department was summoned before COPA   (28) under the Chairmanship of Hon. Kabir Hashim, Member of Parliament to review the progress of implementing recommendations given by COPA held dated, March 24 th , 2021 and look into whether the Inland Revenue Department is capable of achieving the tax revenue proposed in the 2023 budget.

Member of Parliament and Chair Hon. Kabir Hashim pointed out that the government has expected 1852 billion rupees as estimated tax revenue in the year 2022 and plans to increase it to 3130 billion rupees in the 2023 budget. Therefore, questions were raised as to whether the Inland Revenue Department is able to get a 69% increase in the 2023 budget despite the huge tax arrears already in existence.

He further pointed out that if this expected tax revenue is not achieved, there will be a big budget gap and all the desired goals as a country will fail. The chairman also pointed out that the Revenue Administration Management Information System (RAMIS) has been identified as a key factor for the recovery of this tax money.

Furthermore, the Auditor General pointed out that an amount exceeding 10 billion rupees has been spent for the preparation of this RAMIS system, and even so, it is not functioning at a proper level. Moreover, the Auditor General mentioned that although this has been pointed out in the COPA Committee on several occasions before, no formal steps have been taken in this regard.

The Auditor General also stated that the Inland Revenue Department did not provide him with information about the agreement and related payments. The Auditor General further pointed out that the Inland Revenue Department says that it is not possible for him to provide the information according to the agreement and that it is against the Constitution.

Thus, since there are problems in many aspects of the RAMIS system, including the procurement, COPA recommended to give a report within a month with dates on making this system operational in a manner suitable for the country.

Therefore, as there are problems in many aspects of the RAMIS system, including the procurement, COPA recommended a report to be given within a month with dates on the implementation of this system in a manner suitable for the country. The chairman of the committee also mentioned that if the report is not sufficient, they will conduct an audit of the transaction.

The committee questioned the lack of legal action in this regard and the officers present stated that their department does not have the authority to take legal action. The Chairman of COPA pointed out that this is a criminal offense and the necessary legal proceedings in this regard should be implemented soon.

The Chairman of the COPA recommended that a report be given to the Committee within a month regarding the legal action taken in this regard after consultation with the Attorney General’s Department.