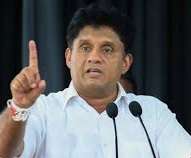 The reference made by President Ranil Wickremesinghe on certain monks as ‘ Sivuru Dagatha Batto‘ became a point of a cross talk in Parliament today, with Leader of Opposition Sajith Premadasa identifying it as an insult to all members of Buddhist clergy, while Chief Government Whip Prasanna Ranatunga insisting that President did not refer to all monks.

“Those who call the monks as Battas with saffron have hurt all monks. Those who refer to monks as Battas should read the Suthras preached by Buddha. Buddha perched that monks should follow the king, but should not approve everything which he does,” Mr. Premadasa said.

Mr. Ranatunga said certain men who pretend to be monks have made people lose their respect they have for the monks.

“There are some men who wear the saffron robes during the day and participate in Aragala protests. However they put on the clothes of laymen and partying with the aragala people during the night. This is why people have lost their respect for monks. My house was recently burnt by a group which was led by a man in saffron robes,” the Chief Government Whip said.

“We also don’t condone anyone who insults any religious leader,” he added. (Yohan Perera and Ajith Siriwardana)