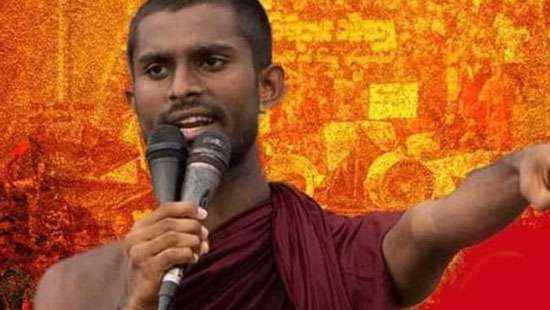 Ven. Galwewa Siridhamma Thera who was released on bail by Colombo Chief Magistrate's Court was subsequently remanded till December 6 after being produced before Kaduwela Magistrate over his alleged involvement in a protest held in June near Education Ministry.

Colombo Additional Magistrate T. N. L. Mahawatta made this order following the Attorney General's consent to release him on bail.

Ven. Siridhamma Thera was ordered to be released on two sureties of Rs.500,000 and further ordered to refrain from making any statement regarding the court proceedings. However, Siridhamma Thera was subsequently produced before Kaduwela Magistrate's Court and he was remanded till December 6 over a case filed for allegedly causing damages to public property during a protest held on June this year.

The Attorney General's advice is yet to be received regarding Convener of Inter University Students' Federation (IUSF) Wasantha Mudalige who is currently in remand custody under the provisions of PTA.

Two student activists had were detained under the PTA for 90 days under Detention Orders issued by President Ranil Wickremesinghe in his capacity as the Minister of Defence. (Lakmal Sooriyagoda)