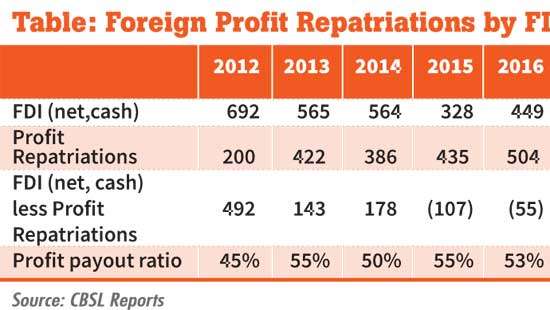 The government appears to be looking at privatising state-owned businesses to foreign investors as a remedy to the current economic crisis. However, such privatisations could lead to further weakening of BOP in the medium term, especially if the privatised business is not going to generate significant foreign income.

It is likely that a high level of profit repatriations seen during last few years is from FDI ventures in non-tradable sector investments like property development, thus causing an unusual imbalance in the external account.
Also, the gradual deterioration of the overall economic and political stability appeared to have encouraged investors to take profits out rather than to reinvest. For example, for the first half of 2022, the FDI ventures have repatriated 97 percent of profits made, despite a 74 percent surge in profits compared to the first half of 2021. This is an unfortunate situation, despite that FDI ventures in Sri Lanka have earned an average of 9.8 percent during the 10-year period between 2011 to 2020 compared to the global average of 6.9 percent. Again, this is a reflection of the true nature of FDI – their short-term focus and preference to take out earnings from Sri Lanka quickly. As Sri Lanka descended into a deep economic crisis in early 2022, FDI ventures have taken out almost half a billion dollar in profits during the first six months of 2022 alone.

Another way FDI ventures exert pressure on the country’s BOP is through loading the company with private (intercompany) debt and raising equity value through revaluations. During the ten-year period between 2012 to 2021 FDI debt stocks have surged by over 200 percent when the growth in FDI equity stock has been almost flat. However, in 2021, there has been an extremely unusual increase in (net) FDI equity value by almost US $ 4 billion (a 46 percent increase YoY). Such surge in equity FDI stock without corresponding (actual) foreign inflows, is possible through massive revaluation of assets (in large FDI venture like the Port City project). However, such high revaluations suggest possible hefty foreign exchange outflows in the future.

What happens when a profitable local company is sold to a foreign investor?

When a profitable local company is sold to a foreign investor, Sri Lanka could benefit from the inflow of the sales proceeds, which could help remedy short-term BOP constraints as well as fiscal constraints. It is expected that any strategic or financial investor, investing in small emerging markets like Sri Lanka typically targets a very short investment payback period (around five to seven years). Hence, after this short payback period is over, Sri Lanka will start experiencing negative foreign outflows from the investment – unless such business generates large foreign income after privatisation.

Usually, FDI ventures also repatriate money through many other channels other than profits – these channels include management fees, royalty and licence fees, etc., which thus exacerbating negative pressure on the country’s external balance.

Privatisations do have many benefits like improving financial and operational performance as well as technological advancement. However, Sri Lanka’s core economic problem centres on its inability to generate sufficient foreign income to sustain itself. In such scenario, selling profitable state assets to remedy short-term liquidity issues may lead to large BOP deficits in the future unless major interventions are done to remedy the core foreign exchange problem.

(Indika Hettiarachchi is an independent international advisory professional in private market investment and projects. He has an MA in Economics from the University of Colombo and a BS in Management
from University of Wisconsin.
Email: [email protected])