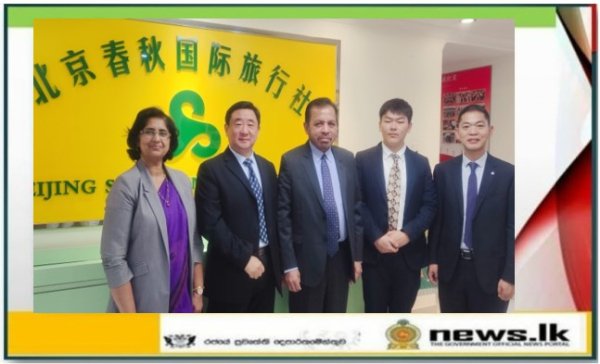 Ambassador Dr. Kohona stated that the Embassy is also exploring all possible ways to position Sri Lanka as a preferred destination in the Chinese Market including a formal request to the authorities.

General Manager Yang stated that Beijing Spring Travel Service Co., Ltd is among the top 10 Travel companies in Beijing and Shanghai and has been awarded certificates many times by the Chinese Government and the travel trade. The annual business turnover of Spring Travel in 2019 was 24.5 billion RMB (3.5 billion USD). Spring Airlines is valued at 50 billion RMB. The company is well established in the Sri Lanka travel trade and connected with local travel companies and has organized a series of group visits to Sri Lanka before the pandemic. The company also owns Spring Airlines with 110 aircraft (A320). The Ambassador who had already held discussions with airlines of Chongqing, Shanghai, Shandong and Sichuan, also discussed  with Yang the possibility of Spring Airlines establishing air connectivity with Colombo from Chongqing, Chengdu, and Kunming.

Yang further stated that the company was of the view that this is the time to carry out promotions as many prospective travelers and tour companies were now exploring new destinations. As soon as the borders are open, the company agreed to designate Sri Lanka as a priority destination in their programmes following as the relaxing of the restrictions, Sri Lanka will be a popular destination among Chinese tourists.

Ambassador Dr. Kohona also stated that the Embassy was making every effort to raise awareness of Sri Lanka among potential Chinese tourists thus helping to realise the goal of attracting at least one million Chinese tourists to Sri Lanka once the Chinese restrictions are relaxed. He also extended an invitation to Yang and the team of Spring Travel to participate in the Sri Lanka Tourism Promotion event which will be organized in mid-December at the Embassy and was accepted by the team.