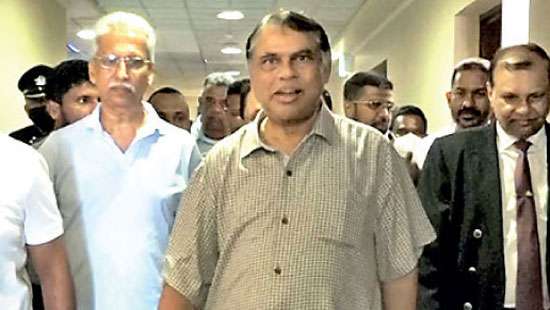 – With Basil now being a civilian, officials say he cannot use the Gold Route Service free of charge

– Several SLPP MPs were seen enjoying the food, but no payment made

Former Finance Minister Basil Rajapaksa who arrived in Sri Lanka on Sunday morning to a grand welcome at the VIP lounge of the Bandaranaike International Airport (BIA) is yet to pay the bill for using the VIP services as well as for the food which was provided to the guests that arrived.

With Basil neither being a minister nor a parliamentarian, he has no right to use the VIP lounge of the BIA and also gather so many guests, most of whom were parliamentarians, officials from the Nidahas Sewaka Sangamaya of Sri Lankan Airlines told Daily Mirror.

When contacted officials from Sri Lankan Airlines Catering Service confirmed that they had provided the food to cater to Basil Rajapaksa's grand arrival at the VIP lounge of the BIA, but they were yet to receive the payment for this food from the Aviation Authority.

Basil had arrived at the Gold Route Service at the BIA which costs over 200 US dollars per person if the VIP service is to be used.

Sources said that the lounge has two rooms and at least 100 people, mostly those from the SLPP, had gathered at the Gold Route Service to welcome the Rajapaksa member and the VIP car park was also used.

Inside sources from the BIA confirmed that the VIP lounge had been used by Rajapaksa and his entourage without a payment being made to date and no one had an answer as to who would pay for the services used by Basil and his SLPP party.

Videos which emerged from the event showed several SLPP MPs and guests seen enjoying the food and greeting Basil but when contacted as to who had made the payments, BIA senior officials remained quiet and said they could not comment.

Basil Rajapaksa left for the United States in September after members from the Rajapaksa family were ousted out of office mid this year and he resigned from his parliamentary seat in June. (Indika Sri Aravinda)