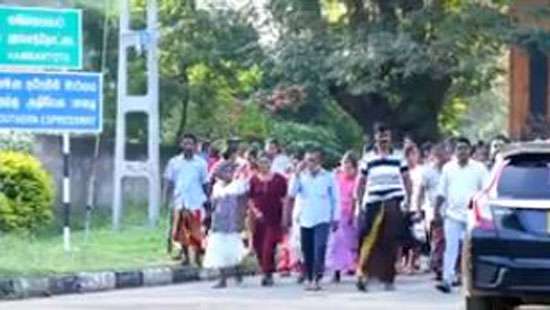 The staff members of five schools in Kataragama yesterday staged a token strike compelling the police not to arrest the teacher in charge of discipline in Sellakataragama Maha Vidyalaya upon a false complaint lodged by a woman that her son studying in grade seven had been beaten by him.

They requested the police to take action against the complainant for making a false complaint and misleading the police. They warned the teachers all over the country to join for a continual strike if justice was not meted out to the teacher.

On the previous day (21) more than 1000 people staged protests in front of Kataragama police compelling the police not to arrest the discipline teacher of Sellakataragama Maha Vidyalaya on a false allegation. The protest was organized by the school development society.

The representatives including former leader of the opposition in Kataragama Pradeshiya Sabha and Secretary of the School Development Society V.G.Pushpakumara, met OIC and explained to him that the student concerned had been repeatedly warned on disciplinary grounds and even his mother was summoned to school and advised to caution her son to give up his bad habits and to correct himself.

Although the OIC had told them that he held a formal investigation and would not arrest him.

Nevertheless, the staff members of five schools in the Kataragama area staged the token strike upon information that the police are preparing to arrest the teacher. (M.K.Nandasena)