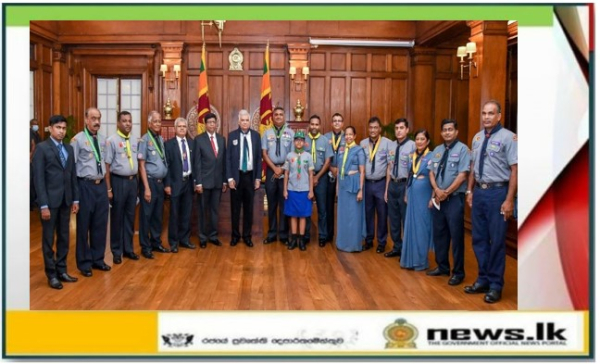 The Sri Lanka Scout Association officially conferred the title of Chief Scout and Patronus to President Ranil Wickremesinghe this morning (21) at the President’s Office, where he made these comments.

The Scout Commissioner, Attorney-at-Law Janaprith Fernando, commissioned and presented the Scout Scarf and the appointment certificate to President Ranil Wickremesinghe.
A report on the progress of the Scout Movement was also presented to the President.

Speaking at this occasion the President further stated that he expects to get the full support of the Scout Movement for the 75th Independence Celebration.

President Wickremesinghe invited the Scout Movement to join the environment-related programmes which are being held with the intervention of the President’s Office and headed by President’s Adviser on Climate Change Ruwan Wijewardena.

( Information from news.lk was used in this report. Also if you have any problem of this article or if you need to remove this articles, please email here and we will delete this immediately. [email protected]thesinhalanews.lk )