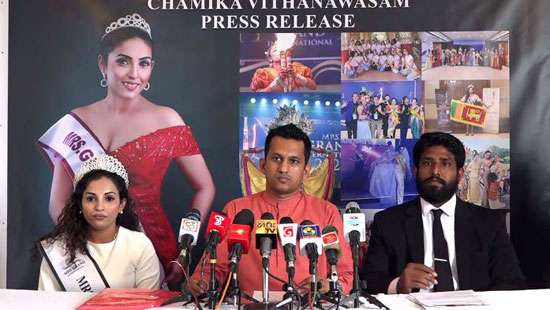 Rasangi Chamika Withanawasam participated in the beauty pageant that was held in Mandalay, Myanmar, from November 8 to 14, while representing Sri Lanka.

While describing the tragic situation faced by Mrs. Withanawasam, the Magen Ratata Organization also claimed that they have a copy of the agreement that was made with the MR Entertainment company.

Mrs. Withanawasam claimed that she had been forced by the director of the MR Entertainment company, Malith Ranasinghe to take sexual bribes. An audio recording to prove that she had requested to use drugs that were banned in Sri Lanka was released to the media.

Malith Ranasinghe who represented the MR Entertainment company was tasked with organizing this international event in Sri Lanka. Mrs. Withanawasam had made an agreement with the said company to represent the Mrs. Grand International 2022 pageant show.

According to the agreement, the responsibility of maintaining the beauty of Mrs. Withanawasam for the pageant was up to her, and the expenses of representing the beauty pageant were to be borne by the MR Entertainment Company.

Mrs. Withanawasam, who was selected for the pageant to represent Sri Lanka, had left for Myanmar. After she arrived in Myanmar, the local organizers informed her that no payments for her participation in the panel had been made.That had made her very disappointed, and the pageant organizers informed her that she had no chance to participate in the contest without making the payments.

Later, she requested that her husband, who was in the United States, send money. According to Magen Ratata organization President Sanjaya Mahawatte, by the time she had paid, the place for her to represent the country was gone.