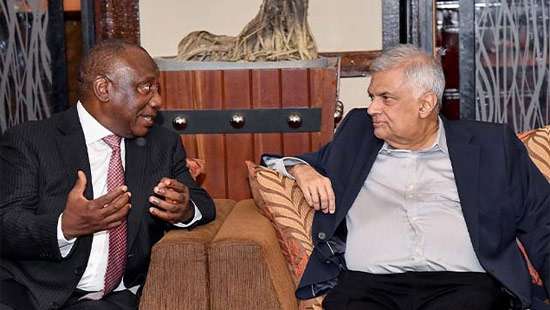 The government held talks with South Africa’s President Cyril Ramaphosa to explore the possibility of getting his country’s support for the establishment of the domestic truth seeking mechanism as part of reconciliation process, a Minister said .

The South African leader was in Sri Lanka for a short time on November 16 on his way home from Bali after attending the G20 summit.

In South Africa ,the Truth and Reconciliation Commission was set up to investigate political crimes during the apartheid era. Mr. Ramaphosa was also the chief negotiator of iconic South African leader Nelson Mandela in holding talks with the apartheid regime for transition to democracy .

Foreign Affairs Minister Ali Sabry told Daily Mirror he had worked out a concept paper to set up a similar commission in Sri Lanka to ascertain what happened during the war time. The Minister said South African expertise would be sought in this regard . He had given an assurance to the United Nations Human Rights Council ( UNHRC) that a domestic truth seeking mechanism would be set up .

“We held talks with the South African President when he was in Sri Lanka ,” he said.The Minister said he would submit a Cabinet paper soon seeking approval to proceed with the setting up of this mechanism.(Kelum Bandara)