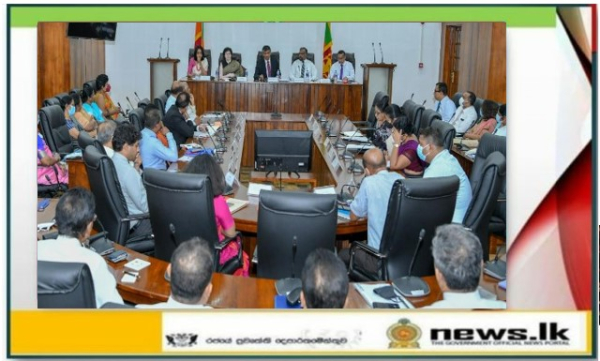 It is the vision of the President that Sri Lanka will integrate with the global value chains and with the largest economies in South Asia and East Asia and then expand to the east region linking to the Regional Comprehensive Economic Partnership (RCEP).
Further, the Secretary to the President invited private sector stakeholders to creatively engage in this development initiative as they are the ultimate beneficiaries.
He made these observations during an awareness session on the resumption of negotiations of free trade agreements held for Trade Chambers and Industry Advisory Committees at the Finance Ministry on November (16).
Secretary to the Treasury, Secretaries of the Ministries of Foreign Affairs, Trade and Industries, and the members of the National Trade Negotiation Committee also participated.
The contours of Global trade have been significantly changed in recent years by bringing regional and global production networks as driving factors of international trade where Sri Lanka has not yet been engaged to tap the potential. Both the growth of supply capacity and the expansion of market access are therefore, recognized as essential for revitalizing the domestic economy.
Towards this end, the government intends to operationalize the Free Trade Agreement with Singapore and has taken steps to resume the negotiations of free trade agreements with India, China and Thailand where foreign direct investment can be largely attracted to channel the benefits to the goods and services trade through the Investment Trade nexus.
A Trade Negotiation Committee has already been appointed by the Cabinet of Ministers to reinvigorate the negotiations and these agreements will ultimately pave the path to gaining membership of the Regional Comprehensive Economic Partnership (RCEP) which consists of 30% of the world’s GDP, trade and population.
During his remarks, Secretary to the Treasury Mahinda Siriwardhana emphasized the importance of leveraging the non-debt creating inflows and diversification of export products as well as markets.
He also mentioned the budget proposal- 2023 of establishing the International Trade Office (ITO) which will deal with all international trade negotiations in the future. The Treasury Secretary also emphasized the necessity of engagement with chambers and other stakeholders during the negotiation process.
The Secretary to the Ministry of Foreign Affairs Mrs. Aruni Wijewardana highlighted that foreign missions and diplomatic channels have fully prepared to facilitate these trade negotiations. According to the government plan, once the proposed institutional mechanism is properly established the Ministry of Foreign Affairs will bear the mandate of international trade negotiations.
The private sector representatives engaged in the session with great enthusiasm and stressed in detail the necessity of giving the highest consideration to their offensive and defensive interests.
They also made a request to focus on other non-tariff barriers such as certain quota restrictions, various issues on laboratory facilities for testing standards, not having mutual standards recognition agreements etc. that are faced by the exporters, through these agreements while removing duties on our exports.
During this kick-off session of the stakeholder consultations, the National Trade Negotiation Committee gave the assurance of conducting broad dialogue with the private sector throughout the negotiations through the responsible government institutions.