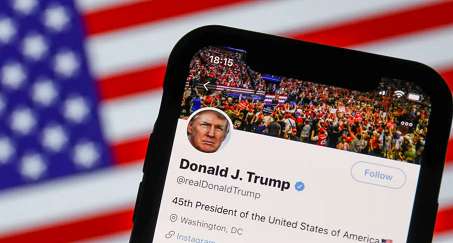 Donald Trump’s Twitter account appeared to be back online after a slim majority of votes were cast, in a Twitter poll organised by Elon Musk, in favour of reinstating the former US president, who was banned from the social media service for inciting violence.

Slightly more than 15 million votes were counted in the poll with 51.8% votes in favour of reinstatement.

“The people have spoken. Trump will be reinstated,” Musk tweeted. During the poll, Musk acknowledged the vote numbers were being affected by automated “bots”, which are not people, and suggested there was a need to “clean up” Twitter polls from being influenced by bots and “trolls”.

Trump had appeared less than keen earlier in the day to return to Twitter. “I don’t see any reason for it,” the former president said via video when asked about it by a panel at the Republican Jewish Coalition’s annual leadership meeting.

He said he would stick with his new platform Truth Social, the app developed by his Trump Media & Technology Group (TMTG) startup.

Trump on Tuesday launched a bid to regain the White House in 2024, and praised Musk saying he had always liked him. But Trump also said Twitter suffered from bots, fake accounts and that the problems it faced were “incredible”.

Musk first said in May he planned to reverse the ban on Trump, and the timing of any return by Trump was closely watched – and feared – by many of Twitter’s advertisers.

Musk has since sought to reassure users and advertisers that such a decision would be made with consideration by a content moderation council composed of people with “widely diverse viewpoints” and no account reinstatements would happen before the council convened.

He also said Twitter would not reinstate any banned users until there was a “clear process for doing so”.

But this week, Musk reinstated comedian Kathy Griffin, who had been banned for changing her profile name to “Elon Musk” which violated his new rule against impersonation without indicating it was a parody account. There has been no new information about process or the moderation council.

… we have a small favour to ask. Millions are turning to the Guardian for open, independent, quality news every day, and readers in 180 countries around the world now support us financially.

We believe everyone deserves access to information that’s grounded in science and truth, and analysis rooted in authority and integrity. That’s why we made a different choice: to keep our reporting open for all readers, regardless of where they live or what they can afford to pay. This means more people can be better informed, united, and inspired to take meaningful action.

The people have spoken.

Trump will be reinstated.