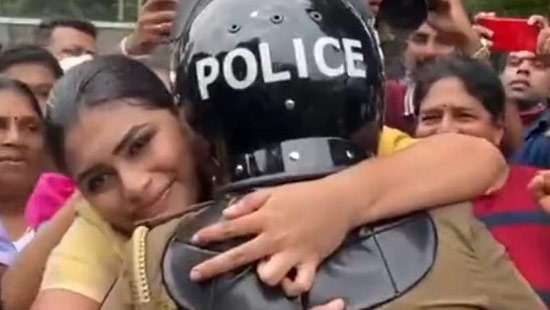 Samagi Vanitha Balawegaya National Organiser  and former MP Hirunika Premachandra said that she was blamed for hugging police officers but they have never asked her to move aside when doing this gesture.

“They also have the same problems that we have. If the police is coming with batons and other weapons we should try to stop them in a peaceful manner,” she told the media at the Press Institute today.

Earlier, ASP Nevil de Silva appearing with Cinnamon Garden Police informed court that former MP Hirunika Premachandra used to give hugs to the police officers during public protests as a tactic to make them uncomfortable.

He informed court that on a number of occasions Hirunika Premachandra used to give hugs to the police officers who were on duty, and he further said this is an act police believe is her modus operandi (a pattern of criminal behaviour).

ASP Silva made these remarks while producing before Court 15 suspects who were arrested for committing a number of offences during a protest held at Colombo 7 on last Monday (14).