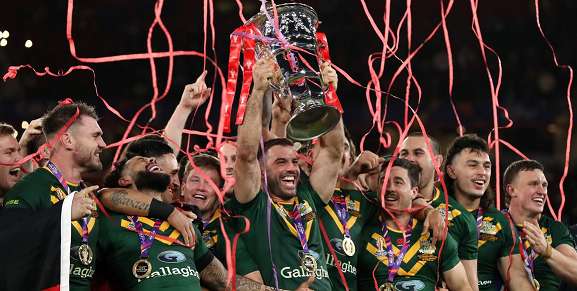 Two-try James Tedesco led Australia to yet another World Cup success. The Kangaroos claimed a record-extending 12th title with a 30-10 victory over Samoa.

Captain Tedesco led the way in a brutally clinical performance from Mal Meninga’s side in front of a partisan crowd of 67,502, most of whom were desperate for the underdogs to somehow cause a shock. That was never likely but Samoa – who could feel aggrieved Aussie forward Angus Chrichton wasn’t red carded in the 47th minute – had their moments and it wasn’t as one-sided as many feared.

With the Kangaroos 14-0 ahead, Crichton was sin-binned for raising his elbow as Chanel Harris-Tavita came in to tackle him. In Super League, it probably would warrant a dismissal but the World Cup has been officiated slightly less stringently.

Regardless, even with their opponents down to 12 men, Samoa couldn’t get off the mark. Indeed, the reigning champions extended their lead with the excellent Cameron Murray scoring their fourth try of the night. Harris-Tavita failed his HIA so it was a sad way for the hooker – who’s retiring even though he’s only 23 – to round off his career.

Australia, who have won every World Cup since 1972 aside from 2008, defended brilliantly to keep Samoa – playing their first World Cup final – at bay when Chrichton was off.

But they did get a deserved try when Jarome Luai danced around some tackles and floated a pass for Tim Lafai to send Brian To’o over in the 61st minute. Still, in his player of the match performance, Sydney Roosters full-back Tedesco added his second following a lovely inside ball from the impressive Cameron Munster.

Stephen Crichton intercepted Ben Hunt’s dummy-half pass to add Samoa’s second try in the 71st minute but Latrell Mitchell rounded things off for the champions with the last play of the game. Samoa, the first tier two nation to ever reach a World Cup final, started with real confidence like they knew they had nothing to lose against the 11-times world champions.

Offloading at will, running on the last tackle, winning many of the collisions, they weren’t going to die wondering. But they didn’t get any luck.

Replays showed they should have had a 40/20 inside three minutes when Harris-Tavita’s kick was denied by Tedesco but only with the Australia captain’s foot on the whitewash. It was missed and, typically, Australia instead scored with their first real chance.

Mitchell got half an inch of space on the last tackle and edged through to bump off Joseph Suaalii for the game’s opening score in the 14th minute. Crucially, they quickly conceded another when Ligi Sao and Junior Paulo left it to each other to tackle Josh Addo-Carr as the Aussie winger popped up in midfield.

Neither did and the tournament’s top scorer hared off down the middle for Tedesco to cross. Nathan Cleary slotted the first of his three goals and Meninga’s side were already sensing this job was well on the way to being done. Addo-Carr showed he’s not just an attacking threat when he denied a try at the other end.

Suaalii brilliantly outjumped the Aussie defence to collect Luai’s kick and Stephen Crichton made the final pass for To’o but Addo Carr desperately got a hand in the way to prevent the Samoa winger collecting. Tavita-Harris burrowed over in the next set only for more scrambling defence to deny him, Munster holding him up over the goalline.

A number of activities were held in Parliament today (01)…

The President emphasized that women’s representation should be increased…